Earlier this week PC component manufacturer MSI teased the arrival of a new Lightning, and thanks to VideoCardz.com we now have both images and specifications of the upcoming powerhouse.

Based on NVIDIA's flagship GeForce GTX 980 Ti, the MSI GeForce GTX 980 Ti Lightning will come equipped with MSI's latest high-end triple-fan, triple-slot Twin Frozr cooler. This cooler features five 'Superpipe' heatpipes and oversized heatsinks, and it will probably need all the help it can get to handle the expected load. 12+3 phase VRM power infrastructure and 8+8+6-pin PCIe powerr connectors should give you some idea of the monstrous power requirements the card is built to meet, letting it push the GPU beyond even the generous factory overclock MSI supply. 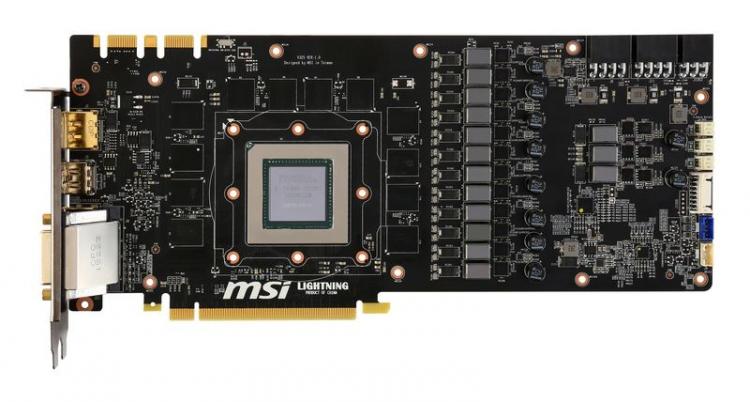 Speaking of, the core is factory overclocked to 1203/1303 MHz Base/Boost (up over 20% compared to reference specifications) and memory reaches 1774MHz/7.1Gbps Effective GDDR5 (a slight tweak above reference). That's considerably more than even the OC Mode of their GAMING 6G variant, with additional headroom anticipated to push it still further. Naturally it also comes tooled with 6GB GDDR5 memory (likely specially picked to reliably hit high speeds), whilst a DualBIOS system should also provide overclockers with some peace-of-mind.

In order to improve reliability MSI have built the Lightning to their Military Class 4 standard. The 10-layer PCB will help to electrically isolate traces, whilst a metal backplate will add rigidity to this no-doubt heavy card.

The GTX 980 Ti Lightning follows in the footsteps of both GTX 780 Ti and R9 290X Lightning variants, both of which pushed GPU overclocking to new heights. Although more than capable as a gaming GPU alone, MSI Lightning cards are built and priced with the expectation that users will put it through some punishing overclocks with or without custom cooling. Expect the GTX 980 Ti Lightning to go on sale soon for a very pretty penny indeed.