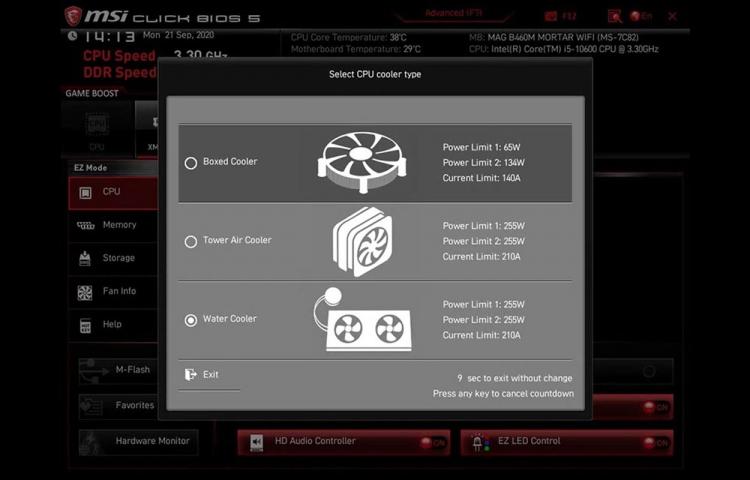 MSI introduces a new BIOS feature on their motherboards called CPU Cooler Tuning application that aims to maximize the performance of your system by optimizing installed cooling. The MSI CPU Cooler Tuning is an innovative and smart addition to the BIOS thats designed to optimize cooling in order to unleash the processors performance based on the thermal design power by delivering efficient cooling, particularly when replacing stock cooling with better aftermarket coolers.

CPU Cooler Tuning is intuitive and very easy to use. A dropdown menu shows the cooling options for users to select. There are three cooling categories listed in the CPU Cooler Tuning application: Boxed Cooler, Tower Air Cooler, and Water Cooler. Each cooling solution option has its own power and current limit. Switching to a better cooling option unlocks the power and current limit to deliver improved performance and stability.

As shown in the table figure above, the maximum power and current limit of B460 and H410 motherboards are tweaked using the CPU Cooler Tuning optimization to achieve higher frequencies when the processor is under load. When the user is using efficient cooling, MSI recommends setting the power limit higher for better performance.