Earlier this week we reported that MSI motherboards were among those gaining unofficial support for non-K Skylake overclocking via 3rd party BIOS updates. Now, following internal development and validation, the vendor is ready to release official BIOS updates to enable the feature on a wide selection of board models.

In our original article we stated that that only five motherboards would be likely to see non-K Skylake CPU overclocking. In fact MSI's support for the feature will be far more comprehensive than originally expected, with fifteen Z170 designs each getting a 'Beta' BIOS update. Included amongst the models are the flagship Z170A XPOWER GAMING TITANIUM Edition and high-end Z170A M9 GAMING ACK, but also a part of the list is the modestly priced Z170-A PRO.

Overclocking using this feature relies on the increasing the operating Base Clock (BCLK), which in part defines both CPU and RAM frequency. To take full advantage of it you will need relatively fast DDR4 RAM and adequate cooling; early adopters users have reported increases exceeding a 20% improvement in BCLK (and hence CPU frequency).

Thanks to this update you can now pick up a relatively inexpensive Quad-Core Intel non-K CPU and MSI motherboard for £150 and £80 respectively, and then proceed to overclock them beyond the stock performance levels of high-end Intel CPUs from previous generations and even official K-class models. 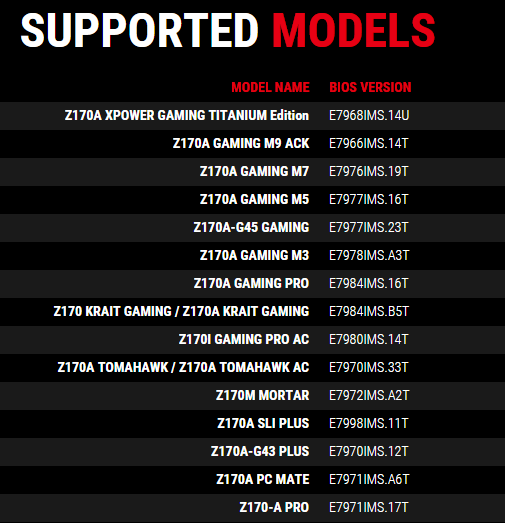 The BIOS' can be found at http://forum.hwbot.org/showthread.php?p=422677#post422677, and the usual disclaimers apply. Although supplied by MSI these updates are strictly classified as 'beta' releases, indemnifying MSI in case Intel pull the feature through a microcode update.