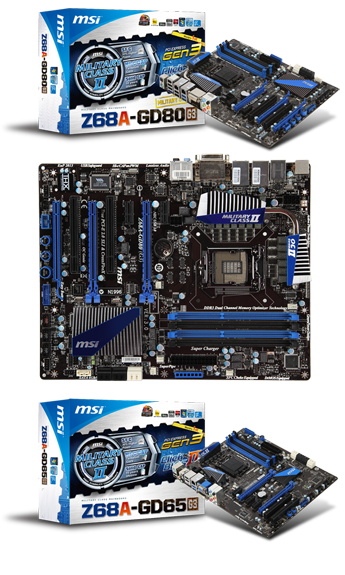 Click BIOS II with unified interface  provides the best experience
As an industry frontrunner of UEFI technology, MSI revolutionizes the industry again with the worlds first UEFI BIOS which utilizes a unified graphical interface in both Windows and in the UEFI BIOS, Click BIOS II. Click BIOS II brings the ease of a clear, unified interface with all the benefits of MSIs UEFI interface. This allows both die-hard overclockers or first-time system users to get the maximum out of their system through an easy-to-use Graphical User Interface. This interface supports all traditional input devices like a Keyboard, Mouse or new touch-screen interfaces for the most flexibility.

OC Genie II unleashes total system power
MSIs exclusive OC Genie II provides stunning system performance within a single push of a button and unleash the true performance of CPU, memory and integrated graphics all at once. By maximizing system performance and guaranteeing the most stable condition, it gives users the best benefits in the shortest time. When measuring with industry-standard benchmarking software such as 3DMark Vantage and PCMark Vantage, the results show that OC Genie II boosts 3D games performance up to 145% and hard drive reading speed up to 457% along with Intel Smart Response Technology.

For more information about the company go to: http://www.msi.com