MSI have boarded the AI bandwagon by launching the public beta of a new app they're calling Sound Tune. This Windows 10 utility, which is compatible with some of the latest MSI desktop and laptop systems, filters out even exceptionally heavy background noise from audio with a strong vocal track, taking the barely legible and making it almost clear as a bell. A trial version is available now, complete with comprehensive setup guide for appling it to your preferred chat application.

Sound Tune operates by applying a pre-trained neural network to an incoming audio stream, effectively eliminating surrounding noise while leaving the predominant voice audio intact. Its Deep-learning Neural Network has been trained on 500m audio samples to apply exceptional filtering, and the utility makes it easy to utilise in a full range of streaming, gaming and videoconferencing applications.

Within Sound Tune the user selects the input source to be filtered, for example the Microphone. Sound Tune itself then appears as a selectable input device within the chat/videoconferencing app, providing processed noise-reduced audio for broadcast. 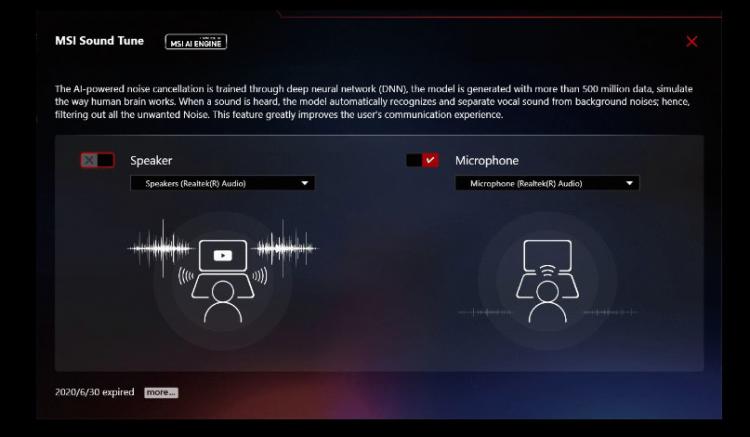 Streamers can also use Sound Tune with OBS and similar platforms, something which will prove essential as the summer heat kicks in and air conditioners become almost mandatory in many locations. It should also serve to eliminate a noisy PC if an open mic is used but your system has noisier fans than the average pop concert.

In an alternative mode, Sound Tune can be applied to audio before it is output to your speakers. The effect is disconcerting and more than a little niche, but removing the laugh track from your favourite (or least favourite) sitcom by pushing a button is a lot of fun that really showcases the power of the technology.

The noisier the broadcast, the harder the Neural Network has to work. In some situations this may cause vocals to sound heavily processed, but still perfectly legible. It won't make an almost drowned out voice broadcast quality, but it does get much of the way there.

This should sound familiar, if you'll pardon the pun. A few weeks ago NVIDIA introduced RTX Voice, an almost identical utility that leverages their pre-trained neural network to perform the same task. Judging by the list of supported hardware (which are all equipped with RTX 20-series graphics hardware) it's possible that MSI Sound Tune utilises NVIDIA's RTX SDK to do its thing, packaging the functionality in an MSI branded UI as a convenient standard solution for compatible systems.

The app and setup guide can be downloaded at https://www.msi.com/Landing/msi_sound_tune. A list of currently supported hardware is as follows: