MSI Military Class III - The next step in Quality and Stability

MSIs DrMOS, which was first introduced three years ago, has become the default standard for mainboards. At the time nearly all mainboards manufacturers have switch to MSIs DrMOS design, MSI introduces DrMOS II. MSIs DrMOS II adds active protection to your mainboard through double thermal protection. DrMOS II allows extreme overclockers to monitor and eventually prevent any damage should they push their system over the limits. Double Thermal Protection consists of: 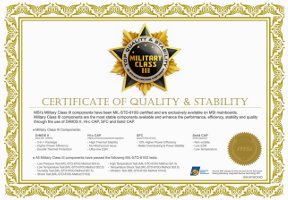 MSI Military Class components have seen many imitations. For instance, MSI had the first mainboard with 100% Hi-c CAP. With the certification of all Military Class III components, end-users can trust on the fact that their mainboard has been built with components that pass the current strict regulations of the United States Department of Defense 810G standard. Every future MSI mainboard will ship with a certification validating the results of a qualified testing lab.