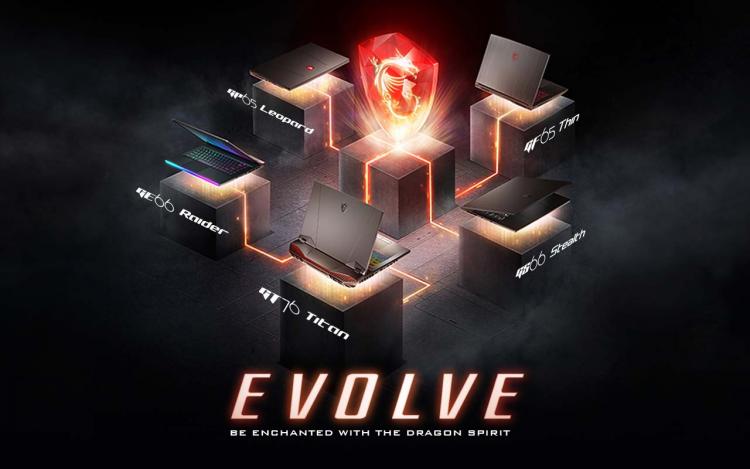 MSI presents the complete line-up of six series of gamer-oriented laptops and Creator Series laptops powered by the 10th generation Intel Core processors. The newly designed and evolved MSI laptops equipped with Intel Comet Lake H-series and the latest NVIDIA GeForce RTX SUPER series graphics offer up to 50% performance boost over the previous-generation models. Featuring up to an Intel Core i9-10980HK processor, the latest Intel chip has a noticeable impact on FPS in demanding games and multitasking with Single-Core Turbo boost reaching 5.3GHz, now gamers can enjoy an unparalleled gaming experience. Furthermore, see real-time Ray Tracing in games with up to the new NVIDIA GeForce RTX 2080 SUPER, AI-enhanced graphics, which can also provide a faster efficiency than its erstwhile generation.

GS66 and GE66 have redefined whats possible when it comes to thin and light with innovative designs. Its hard to believe that all the features, a display with 5 times faster ultra-smooth 300 Hz refresh rate, 99.9 watt-hours larger battery, and powerful performance from the flagship processors and graphics, are all packed underneath the compact hood of GS66 and GE66. 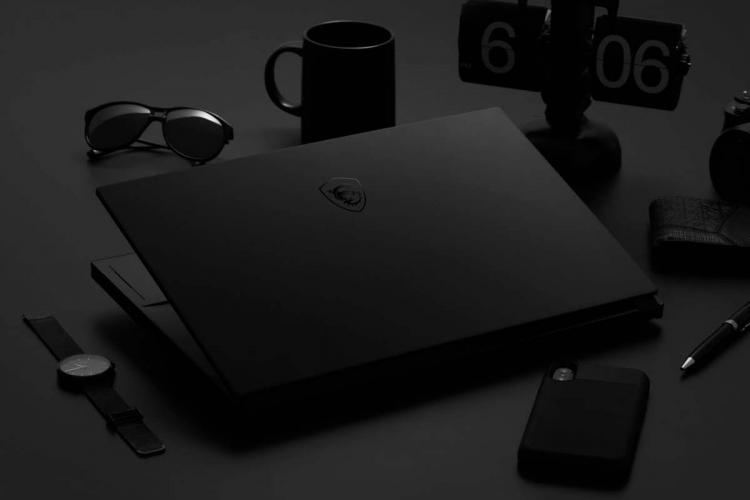 With the new mystical Core Black theme, the low-key and understated design has won both the "iF Design Award" and the "Red Dot Design Award". Powerful yet portable devices indicate where the industry is headed. Living up to its name, GS66 Stealth shows what it means to be sharper and sleeker with the latest powerful processor and graphics. GS66 has also unleashed its full potential by the new MSI exclusive Cooler Boost Trinity+ with 0.1 mm thin blades to maximize its airflow, allowing the system to stay cool and powerful.

GE66 Raider: Lightem Up and rise of the new raider! 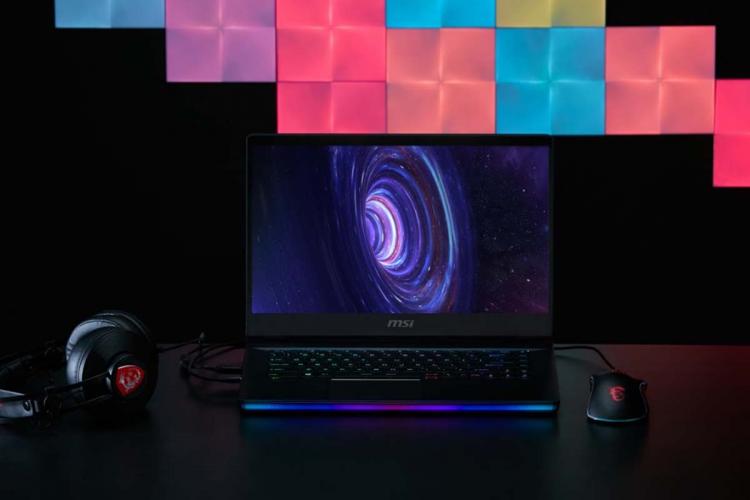 The futuristic GE66 Raider represents enthusiastic gamers. Its not only the best powerful weapon for gamers, but it also ignites the true gaming soul. GE66 is the assembly of aesthetics and performance. The spaceship-like chassis and the latest Mystic Light shines with the mesmerizing panoramic 16.8 million RGB aurora lighting show. Powered by the latest CPU and GPU, GE66 has defined what it means to be a portable gaming laptop. Thus, Its not too surprising that the innovative heroic flagship laptop obtained a remarkable "Red Dot Award". 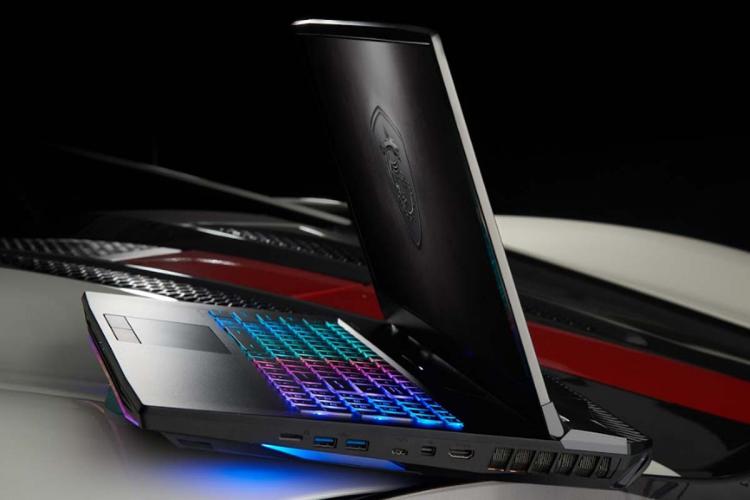 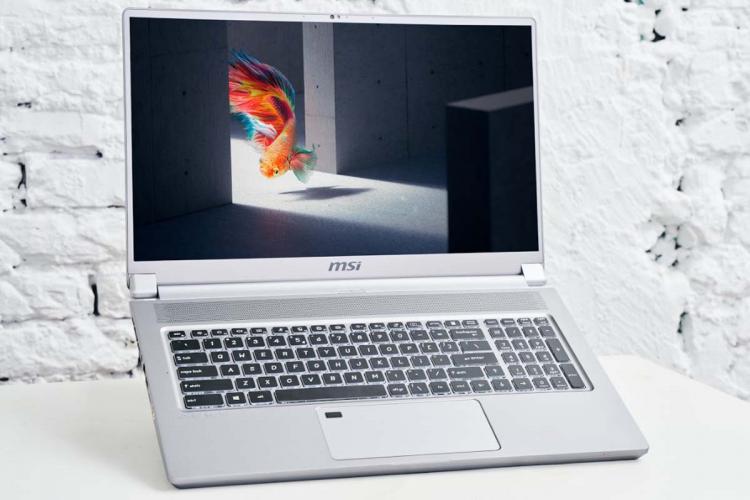 The MSI Creator 17 is the brand's best content creation laptop ever with Mini LED display and true-to-life color accuracy. It is the worlds very first laptop with a Mini LED display. Built with creators in mind, the Creator 17 is also the first laptop to meet DisplayHDR 1000 standards; its 17-inch 4K screen boasts a peak brightness of over 1,000 nits, which was acclaimed by media as a revolutionary screen thats brighter than any of its competitors, whether IPS or OLED screens. Now with up to 10th Gen Intel H-series processors and GeForce RTX 2080 Super graphics, it can hardly overpraise that the Creator 17 is easily the strongest GeForce RTX Studio laptops for next-generation. The Creator 15M & 17M in the same series are also fully upgraded with the latest CPU and GPU.

See the models and specifications below. 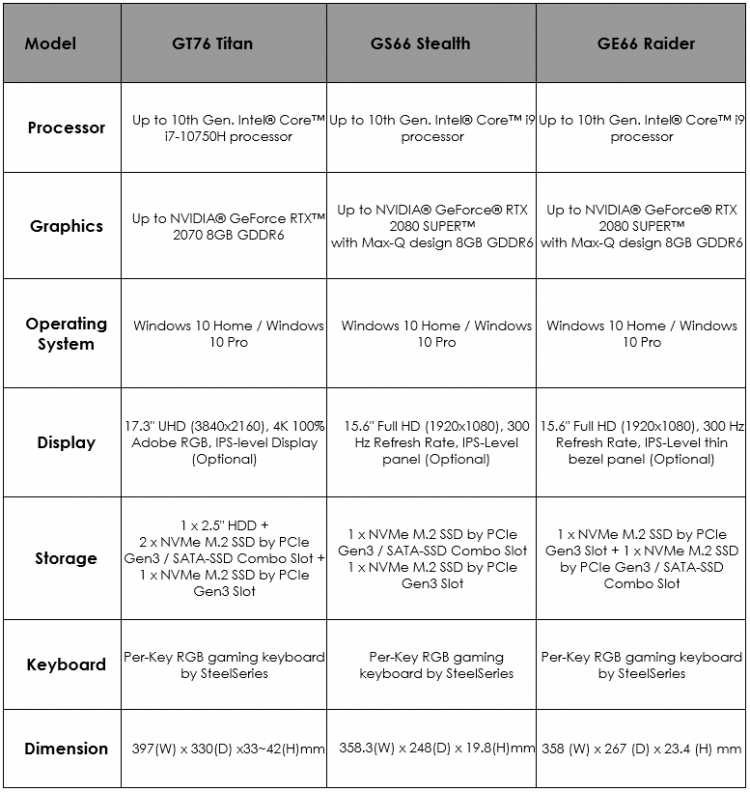 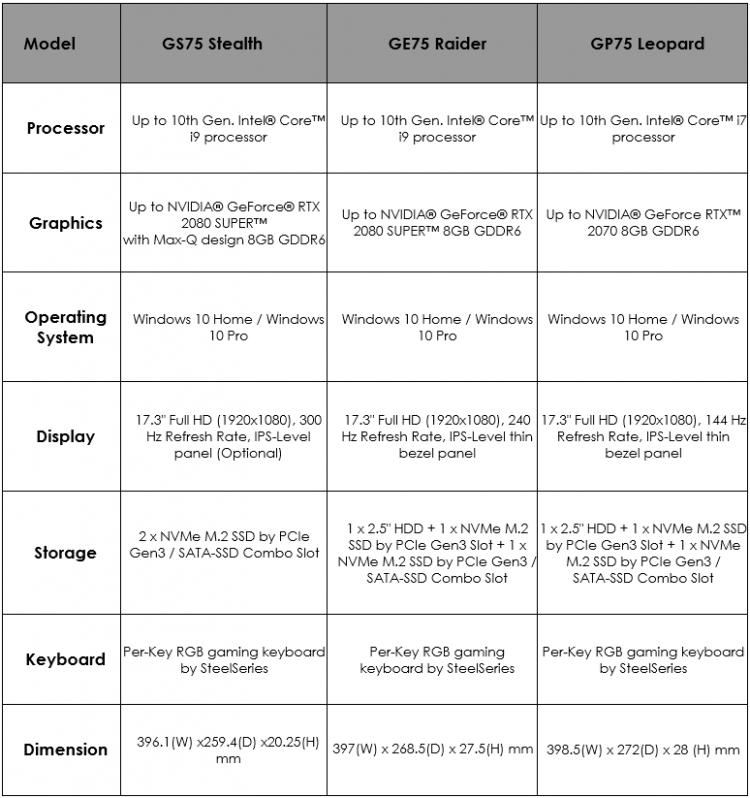