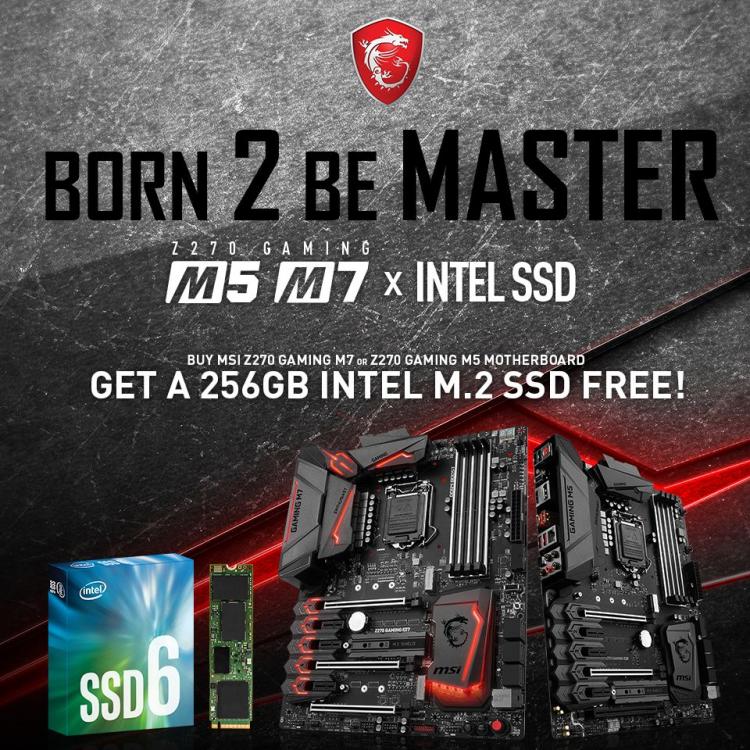 Intel's 7th Generation Core CPU and Z270 motherboard platform has just been released around the world and (for pretty obvious reasons) partners are eager to tempt you with some cracking launch window offers. One such offer has just been revealed by MSI: buy one of their selected Z270 motherboards, and pick up a free 256GB Intel 600p M.2 SSD to go with it.

Due to the use of PCI-Express I/O rather than SATA, M.2 SSDs are capable of greater bandwidth than their mainstream counterparts as some of our storage tests have shown. Sadly they don't come cheap, and can be a bit of a tough sell if your budget is already a little constrained. A modest 256GB capacity is great for where it can do most good: as a primary OS drive with a core selection of games. If you can pick one up for free it could be a substantial improvement to your experience on a brand new system.

MSI's offer extends to two of their high-end gaming and overclocking range: the Z270 GAMING M5 and Z270 GAMING M7. We don't need to tell you that they'll be packed with chipset-specific features - including out-the-box support for the new generation of Intel CPUs as well as older Skylake processors - and also come equipped with MSI's proprietary features including VR BOOST USB, configurable RGB lighting, M.2 Shield and more. Additionally they have an all-black livery, making them almost a blank canvas for you to stamp your own identity on to.

The 600p series are workhorse M.2 SSDs that form part of Intel's consumer-class lineup. Performance depends on capacity, with the 256GB drive listed as capable of up to 1570MB/s read, so it's certainly no slouch. The MSRP of these drives is around the £90 mark, so you getting a very healthy slice of value there.

Redemption of this offer is direct with MSI at https://www.msi.com/Promotion/Z270-motherboard-ssd-bundle. Not only can UK consumers take advantage of it, but also those from Australia, New Zealand, Belgium, Denmark, Finland, Norway, Sweden, Czech Republic, Germany, Spain, Portugal, France, Italy, Poland, Russia, Turkey and Ukraine.