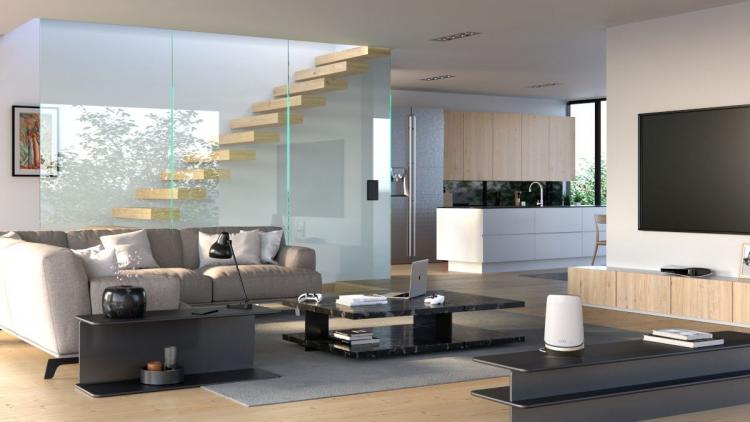 The last 18 months have hit the world of consumer networking like a whirlwind. Lockdowns, changing work patterns and a boom in streamed entertainment - both gaming and video - has put pressure on home wireless networks like never before, a sector already struggling under the weight of so-called smart home devices and spectrum availability largely unchanged since the early 2000s. So its with some relief that a new wifi standard arrived this year to address the twin challenges of bandwidth congestion and simultaneous connected devices, a standard that is now being rolled out to broader categories of consumer networking products.

Today networking specialists NETGEAR are launching the first of a new range of Wi-Fi 6E Mesh Networking devices, and in the process significantly augmenting their mesh networking capabilities for 2022 and beyond. The Orbi Quad-band RBKE960 kit joins the Nighthawk RAXE500 in adding new bandwidth opportunities for consumer wireless home networks by taking advantage of the recently opened-up 6GHz spectrum that makes up the Wi-Fi 6E standard, laying the groundwork for next-generation use-cases including Augmented Reality, Virtual Reality and 8K video streaming. The kit will be available to pre-order today from Netgear.com.

Despite the introduction of Wi-Fi 6 in recent years, home networks are increasingly congested due to an over-reliance on 2.4GHz and 5GHz frequency bands that havent been expanded in over 20 years. Both bands have been in place for decades but demand for bandwidth has grown apace since the advent of video on demand, while the prevalence of so-called smart devices throughout the home impinged performance still further. Urban residential areas in particular are feeling the pinch thanks to multiple overlapping networks in dense housing locations. Wi-Fi 6 eased the situation somewhat with better traffic management protocols, but it was no silver bullet. 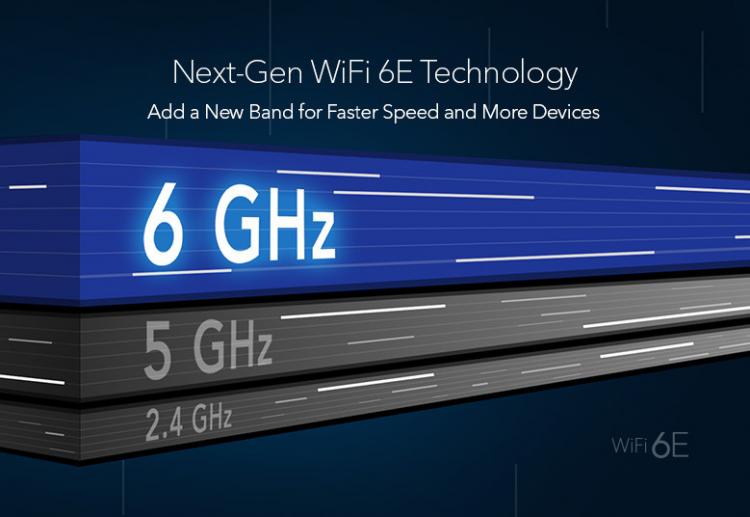 In 2017 the Wi-Fi Alliance, steering body and multinational lobby group for all things wireless, published a report which laid out the case for extending use of unlicensed mid-band spectrum beyond 2.4GHz and 5GHz, citing an expected 50% growth in wireless devices to 12bn by 2020. The unforeseen explosion of work-from-home and home entertainment in the last 18 months has only accentuated this need; in the US alone downstream data has increased 38%, while upstream it has increased by a whopping 56%.

In 2020 and 2021 the United States, European Union, UK and other regional regulators agreed to open up frequency space around the 6GHz band. In some instances, particularly the US, that has been wide-ranging; up to 1.2GHz of additional spectrum - seven 160Mhz or fourteen 80MHz channels - is now available with some caveats. Elsewhere the regulators have been more stingy; the UK and EU have made available a frequency band extending only 480MHz, i.e. three 160MHz channels. Still, we cant look a gift horse in the mouth, more bandwidth is after all more bandwidth.

The new spectrum as much as quadruples the effective available bandwidth to consumer wireless networks compared to the aging - but still common - Wi-Fi 5 through higher data rates and spectral efficiency, particularly helping to improve overall traffic management when connected to multiple low data transmission devices. The actual network topology can vary greatly in implementation however, which is where hardware developers and manufacturers such as NETGEAR come in. 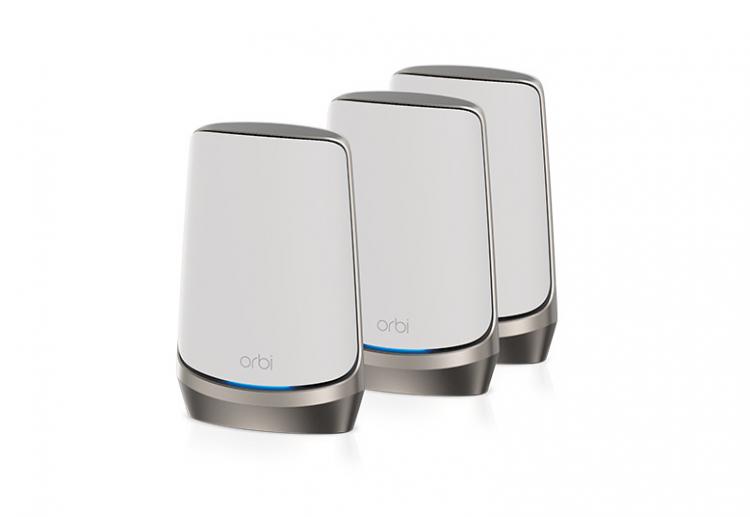 NETGEARs Orbi Mesh Networking devices have been some of the most highly regarded in the consumer space, particularly since the adoption of Wi-Fi 6 in 2019. As the name suggests, Orbi implements a seamless Mesh topology across a broad area to improve overall coverage in a residential building or office space. Its single router and multiple satellite kits are more efficient than single router and access point setups and seamlessly balance load across the network as a whole. Theyre also significantly more adept at handling greater numbers of smart home devices such as smart bulbs, kitchen appliances, TVs, set-top boxes and phones, high numbers of which can be problematic for less appropriate network layouts despite their low individual bandwidth needs.

Orbi also incorporates a broad selection of optional tools for home network monitoring and management. The Orbi Smartphone App for instance keeps these controls at your fingertips, while NETGEAR Armor provides advanced cybersecurity tools that can pre-emptively deal with many modern threats out there for unwary navigators of the Web. In most respects it takes a one-size-fits-all approach where the network administrator - whether they be a technical wiz or relative novice - can interface with the deeper aspects only as needed.

The newest Orbi Mesh Network kit is NETGEARs first to implement the new Wi-Fi 6E standard, building on the improvements made in earlier generation Wi-Fi 6 kits. Cutting no corners, NETGEAR boasts of both blistering performance and greater overall network stability.

In marketing short-hand, the Orbi 6E is a quad-band networking solution rather than a tri-band system like the Wi-Fi 6-based Orbi RBK850. It utilises four distinct communications bands: 2.4GHz, 5GHz and 6GHz for communicating with attached devices, and a dedicated 5GHz backhaul; as a result it has a maximum combined bandwidth of up to 10.8Gbps. Youll often see that in the publications referring to it as an AX11000 solution akin to the Nighthawk RAXE500, and is a quick reference for comparing approximate available bandwidth with other 802.11ax devices (such as the AX6000 Orbi RBK853). 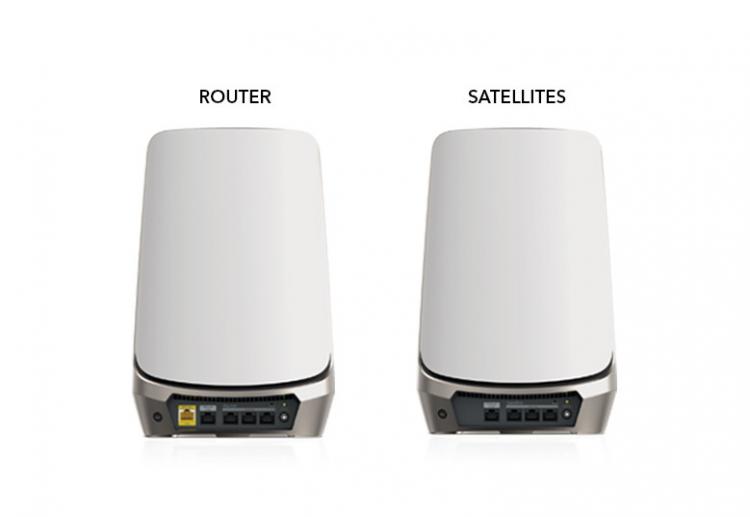 Available connections on the Orbi RBKE96x Router and Satellite

Perhaps the most significant differentiating factor for Orbi 6E from competing solutions will be the lack of a 6GHz dedicated backhaul (i.e. the communications channels between router and satellites). The kit instead retains the proven 5GHz backhaul of the prior generation, a virtual wired connection that doesnt break down as additional devices are installed and also has longer range than 6GHz transmissions.

6GHz bands are therefore explicitly reserved for high bandwidth devices, reducing the pressure on 5GHz bands. In a clean environment 5GHz and 6GHz channel throughput would be the same, and congested networks should see an outsized improvement in 5GHz performance as the highest bandwidth use-cases are offloaded.

NETGEAR state that the impact of the Orbi 6E could be to improve 5GHz speed by as much as 30%, in addition to overall coverage. Up to 16 Wi-Fi streams should provide complete coverage across your home, with internet access for each device effectively limited only by your ISP.

But thats not the sole extent of improvements brought into place with the Orbi 6E.

- NETGEAR have integrated a 10G port onto the rear of the router, future-proofing the network for the next generation of home Internet connections.
- Satellites each also have a 2.5G port which can be used as a dedicated wired backhaul or connection to NAS storage or LAN PC.
- WPA3 Security extended across the new 6GHz band.
- Up-to 7200 square feet of Wi-Fi 6 coverage, with clustered Wi-Fi 6E coverage where those devices are needed.
- The Mesh is divided into four separate networks - Home, Guest, 6E and IoT - to allow for more granular control of permissions and other security aspects.
- Phones controlling smart devices through apps no longer need to shift from 5GHz to 2.4GHz networks to interface with the devices.
- Parental Controls by NETGEAR are now featured on the back-end, the omission of which was a major criticism levelled at earlier versions of the Orbi range. 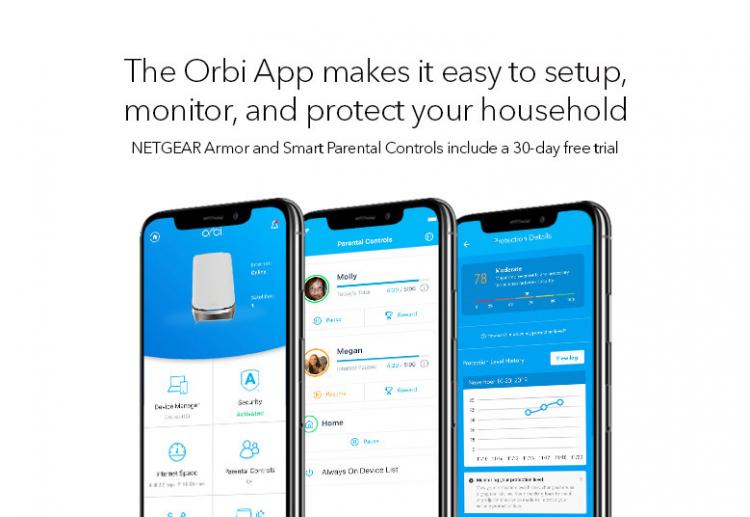 We noted earlier that there are regional differences in the licensing permissions for 6GHz spectrum, and that will be important for the overall performance of the Orbi 6E. Regions with the full 1.2GHz of additional contiguous spectrum will see the highest performance in their 6GHz WLAN, whereas regions such as the UK and EU will be much more restricted due to fewer available channels. That being said NETGEAR have also stated that, if and when regional regulators open up more of the 6GHz band, the Orbi 6E units bought in those regions will be able to take advantage immediately (likely through a firmware update). In this respect theyre seeking to make early adoption less of a pitfall than it might otherwise be, and it should have minimal impact until Wi-Fi 6E is more broadly adopted.

But speaking of early adoption pitfalls, we should mention the price. The Orbi Quad-band Mesh WiFi 6E System (RBKE960 Series) of 1 Router and 2 Satellites will come in at US$1499.99 / £1499.99 (inc. V.A.T), while single satellites will be available for $699.99/£699.99 to extend the network still further. Commensurately less expensive single satellite bundles will also be sold on a future date, but for now the RBKE Series is clearly being set up as a flagship networking platform for those with heavy usage patterns and a plethora of smart devices numbering well into the dozens already attached.

Making it a more compelling solution in the near-term will be the introduction of new Wi-Fi 6E devices, including the expected Intel Alder Lake notebooks this year and Apple products in 2022. A small number of Wi-Fi 6E PCIe add-in cards are available for desktop PCs, and more are likely before the year is out. For now however the Orbi 6E solution has more than one eye on the future while still giving users the best possible experience with the wireless technology they use today. 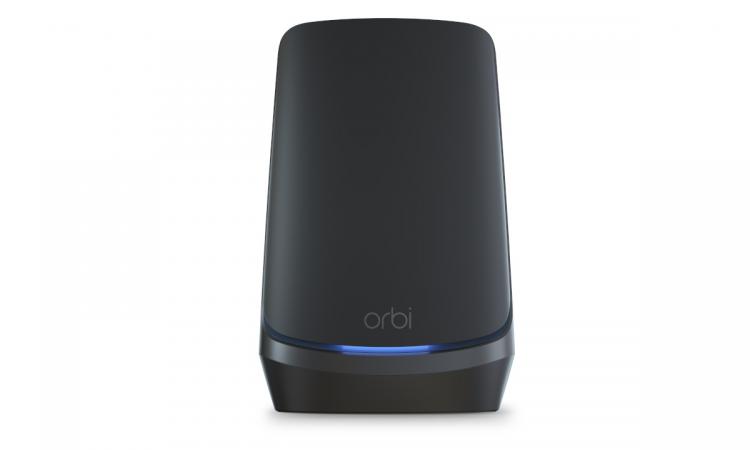 More information on the Orbi Quad-band Mesh WiFi 6E System is available on its product page at Netgear.com. Pre-orders begin today at Netgear.com and partnering retailers for delivery before the holidays, while pre-orders at Netgear.co.uk will begin shortly. Due to popular demand Netgear are also introducing the Orbi Black Edition Router and 2 Satellite System, sold direct through Netgear.com for a limited time.

There are currently 589 user(s) online:
Google