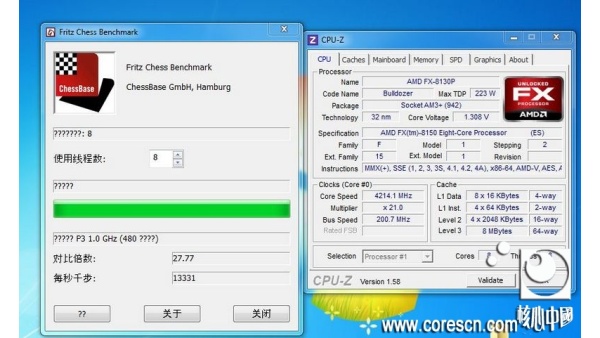 A screenshot of AMD's FX CPU and the Fritz Chess Benchmark result.

This screenshot shows an engineering sample FX-8150 (CPUZ shows the older name FX-8130p??) with a base speed of 3.6GHz and turbo of 4.2GHz. However details are unsure if this is release silicon or earlier sample as well as if there are still any BIOS issues. The Fritz benchmark result shows a score of 13331 which if correct would mean per core it is performing less than AMD's Phenom 2 Deneb and Thuban cores.
The results were originally posted on a chinese forum corroborates with some leaks earlier at DonanimHaber.

These scores to many are underwhelming though some state that maybe AMD have intentionally crippled the Engineering Samples by releasing incomplete BIOS or simply that they do not perform because they are engineering samples, they are meant for testing purposes only and they do not represent the finished retail product. Is this just a smilely face of denial or does AMD really have a trick up their sleeve?