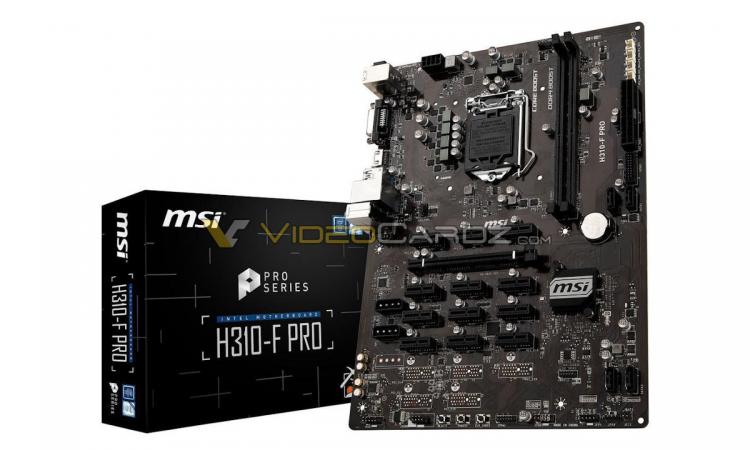 Intel's Coffee Lake platform has thus far been left out in the cold when it comes to motherboard designs created with the expressed purpose of cryptocurrency mining. That's not particularly surprising given the relative importance of the GPU over CPU and little need for Z370's bells and whistles, but things are starting to change with the introduction of Intel's H310 chipset. Now via Videocardz.com comes news of the first Coffee Lake cryptocurrency mining motherboard: the MSI H310-F PRO.

Immediately the eye is drawn to all those PCI-Express slots, used for populating GPUs via riser cables. The H310-F PRO has thirteen in total - twelve PCI-E x1 slots and one full-length x16, because who needs PCI-Express bandwidth if you're mining 24/7. Two 4-pin molex connectors provide additional power to that GPU array, helping overall system stability.

It's likely that in order to handle this many GPUs the H310-F PRO utilises a modified UEFI BIOS, without which just booting such a system would be nigh-on impossible. An array of jumpers near the 24-pin power connector likely allows the selective disabling of PCI-Express slots, probably in sets of three.

PCI-Express aside, the motherboard features very little in the way of perks you would expect to see on even a budget H310 design, speaking to its purpose-built nature. Storage is stripped-down - 4 SATA ports is all you're getting, there's not even an M.2 slot - and you'll just get the one USB 3 header. CPU VRMs are on the sparse side; this isn't an overclocking design after all. Even the black paint on the PCB is thin enough to appear brown rather than black.

Finally, there appears to be solder points for an additional five PCI-E x1 slots and a further molex connector. Perhaps this motherboard is just the first, and even more complex releases are in the works?