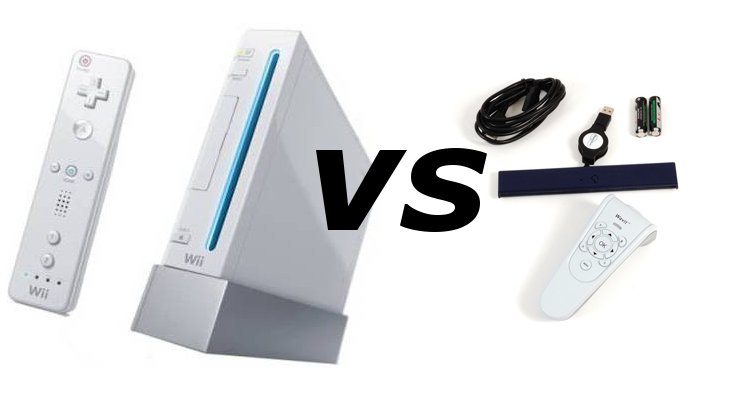 Court battles over patents aren't exactly rare these days, and tech companies are continually attempting to buttress their own portfolio in fear of being sued by a competitor citing a general or obscure patent held by them. Patent Trolls - companies which are created solely to buy and leverage patents against well-established products - are generally the source of our ire, so it's almost refreshing to see a company resort to litigation who actually filed the patent themselves. When the company even made and sold product a product based around that patent... well lets just say a note was made in my diary. In this case we have little known ThinkOptics Inc. as Plaintiff, and slightly more well known Nintendo named as (one of many) Defendant. TechOptics Inc are makers of the Wavit Remote, which uses this technology to control a pointer on a screen rather than a mouse with mousing surface.

ThinkOptics Inc's lawsuit claims that Nintendo breached U.S. Patent #7,796,116 "Electronic equipment for handheld vision based absolute pointing system" that describes a means by which an IR/wireless transmitter coupled with a sensor-bar-type receiver may extrapolate an position on the screen that the remote is pointed at. Obviously the alleged infringing device is the Wii Remote+Sensor, and may also apply to the WiiU's remote; if gaming was a future application for the patent, and ThinkOptics patent filing certainly indicates it was, it could increase the damages incurred. Furthermore, ThinkOptics contend that Nintendo sold the Wii knowing it was in breach, following unsuccessful attempts to file patents in which ThinkOptics' were cited as reasons to reject by the Trademark Office.

The rejection of [...] applications  assigned to Nintendo Co. Ltd.  based on the 116 patent is proof that the Nintendo defendants knew or should have known of the objective risk that one or more of their products infringed at least one claim of at least the 116 Patent, - ThinkOptics Inc.

Also named in the suit are prominent U.S. Wii retailers, games developers and hardware manufacturers, in what's seen by some as a classic attempt at suing anyone who may have been involved in the hope that they would release new information in exchange for immunity.

The suit has been filed in the patent-holder friendly U.S. District Court of the Eastern District of Texas, further improving their chances of winning. As yet unknown is the reasoning behind waiting to launch the suit until 5 years since the release of the Wii, but the complexities of the U.S. legal system could easily explain this discrepancy.

Nintendo have three major options in fighting this suit. The first is to argue that the patent doesn't apply to the Wii, which may be effective depending on the specific implementation of the Wii Remote and if there is a loophole in the patent. The second is to argue that the patent itself is invalid, either down to prior art on Nintendo's part or obviousness, which is unlikely to be successful given the presiding Court. Finally they could settle the suit and license the tech for use in the U.S., which will be costly but not as costly as being found knowingly in breach. If the suit results in a ruling in favour of ThinkOptics, especially with regard to knowing infringement on the part of Nintendo, damages are likely to be very high indeed.

« Intel Core i7 2700K CPU is on it's way · Nintendo Sued Over Wii's Alleged Breach of Patent · Bulldozer Pushes Overclocking World Record Out To Over 8.4GHz »