No Half Measures - ASUS Launch The H370 Mining Master, Supporting Up To 20 GPUs 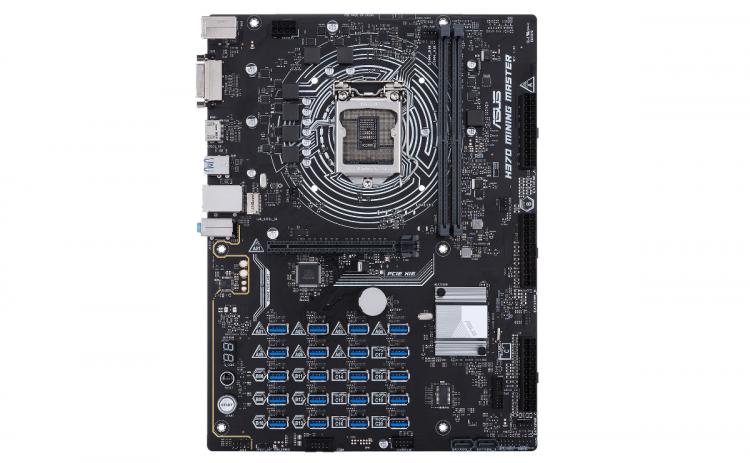 LONDON, UK, May 30, 2018  Since its release last year, the ASUS B250 Mining Expert made ambitious cryptocurrency hobbyist farms more accessible and industrial-scale operations more efficient. It was hugely successful, with a sales volume that far exceeded expectations. With the concept proven in practice and more insight gained on what miners need, ASUS redefined the formula for a second generation.

ASUS today announced the new H370 Mining Master motherboard, which increases density with support for up to 20 graphics cards, simplifies connectivity by letting USB riser cables plug directly into the PCB, and reduces downtime by making problems easier to diagnose. Visitors to Computex 2018 in Taipei, Taiwan can see this blockchain behemoth running at full capacity in a custom mining rig at the ASUS booth, #M410 in Nangang Hall, from June 5-9. An early preview of H370 Mining Master is also available at ASUS EdgeUp.

Mining is a numbers game; its only worthwhile if the value of the generated cryptocurrency exceeds the cost of producing it. Increasing the number of graphics cards per node is a great way to stack the deck for the best results. Typical mining setups feature a common PCIe riser design with each graphics card being connected via a PCIe x1 link routed over a USB 3.1 Gen 1 interface with a SATA power cable. The risers are usually made up of three pieces: the x16 slot that hosts the graphics card, the x1 card that plugs into the motherboard, and the USB cable that connects them.

H370 Mining Master greatly simplifies this chain by replacing its predecessors x1 slots with banks of vertical PCIe-over-USB ports that let riser cables plug directly into the motherboard. This direct connection is sturdier than using a PCIe card, with less chance of inadvertent disconnects, and it reduces the total number of parts in the mining rig.

Less time maintaining a machine means more time mining with it, which is why the H370 Mining Master includes a suite of diagnostic features designed to make the platform easier to manage. Chief among them is GPU State Detection, which scans the system at boot and indicates whether each riser port is empty, connected to a functional graphics card, or experiencing problems. The updated State Detection GUI clearly identifies the location and status of each port along with the alphanumeric code that identifies it. Onboard diagnostics are augmented by individual debug LEDs that light up when there are problems with specific system components, like the CPU or memory.

Efficient mining requires a few UEFI tweaks that are consolidated in a special Mining Mode. The motherboards PCIe lanes are set to run at Gen 1 speeds to improve compatibility and stability with USB riser cards. Other tweaks specific to GPU-based crypto crunching are activated by default, so users are ready to go right out of the box, without having to mess around in the firmware interface.

The H370 Mining Motherboard will be available from in the UK with pricing and availability to be confirmed.