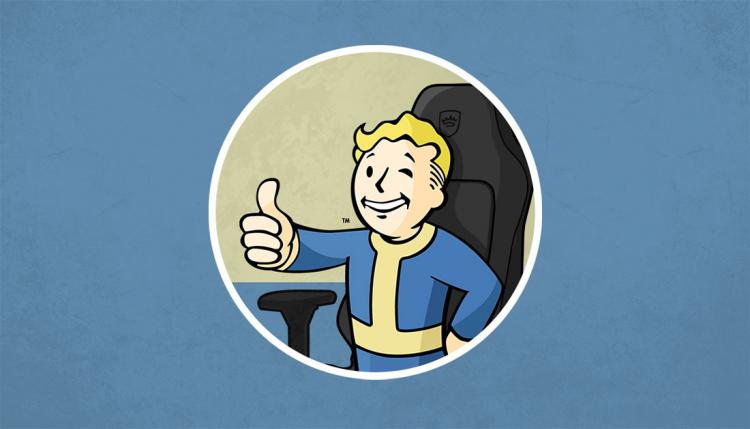 noblechairs - manufacturers of premium gaming chairs - are teaming up with Bethesda to create a line of seats inspired by some of the most popular videogame franchises around. Enthusiasts and fans of Fallout, DOOM, RAGE, The Elder Scrolls and Wolfenstein titles will soon have a new tool for their arsenal of branded gaming peripherals.

The noblechairs team are gaming enthusiasts to the core, which is reflected in their blending of gaming and high-end office seat design throughout the lineup, as well as their extensive cohort of chosen influencer and streaming partners. Their first brand partner emphasised a premium outlook as well as gamings increasingly mainstream position in the cultural landscape; a tie-in with Mercedes on the EPIC Special Edition Mercedes AMG lent noblechairs a huge amount of exposure whilst also reflecting Mercedes own ambitions in the sphere including Esports. Ambitions that look almost prescient given the current F1 championship situation and a stop-gap transition to online events.

noblechairs are inching a little closer to home this time through an official licensing deal with Bethesda Softworks, publishers of ground-breaking franchises that have been a touchstone in gaming for over a decade. The partnership will not only allow them access to the immensely popular games outlined above, but could also see them jump on-board early with the next smash hit from the US company. Gamings increasing presence as the pre-eminent leisure medium and the marketing clout afforded by streaming (and an influencers chair being visible at all times) give deals such as these enormous value for all parties (particularly franchise fans). 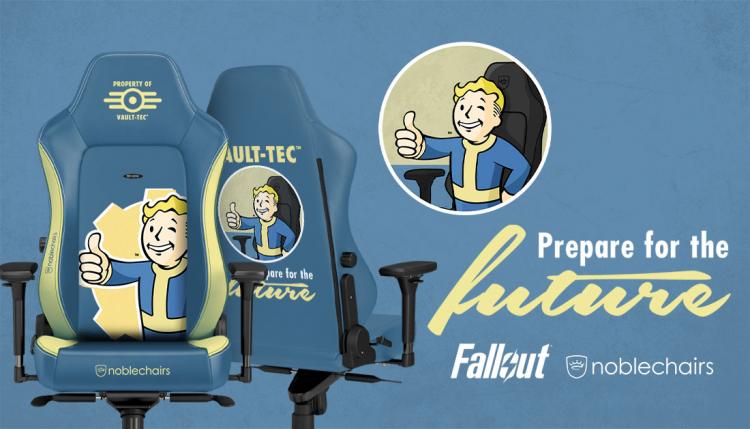 The first design will take inspiration from Fallout, including a blue and yellow livery, Vault Boy imagery and Prepare for the Future slogan. Fans of both the most recent and classic installments can enjoy this new gaming chair with premium upholstery and extremely durable construction that, if previous noblechairs are anything to go by, will be exceptionally comfortable to boot.

Images of the design shared by noblechairs are of a Fallout-themed HERO concept, but the final production release could change (and potentially utilise the EPIC or ICON-series frame instead/as well).

Check out our review of the Vortez Premium Award-winning noblechairs HERO here!

The noblechairs Fallout Edition gaming chair is set for a Q2 2020 launch alongside a model based on DOOM (imagery to be unveiled at a later date). It will feature the Slayers Military Green suit colour as a base, DOOM logo stitched into the headrest and Slayers Club logo on the rear of the chair. The backrest will depict the Slayers Crest in red.

Later this year we may also see riffs on The Elder Scrolls, Wolfenstein and RAGE, Bethesdas ongoing multi-title franchises. It will be exciting to find out what the graphic designers can dream up thats in-theme for these gaming titans, a chair based on the garish RAGE 2 aesthetic in particular would be a sight to see.

The noblechairs team are justifiably enthusiastic about the partnership with Bethesda:

"Bethesda is one of the industrys most respected and accomplished game studios in the world. A partnership with a global high-end gaming chair brand is a great match for those who want to play games in comfort. I'm looking forward to seeing the final designs in the flesh, rip and tear!" - Steven Levitt, Business Development Manager at noblechairs

"As a huge fan of Fallout and Bethesda's various other properties, its a dream come true to be able to pair the premium quality and ergonomics of noblechairs with one of the greatest game designers around. Welcome home!" - Glen Rhodes, Senior Product Manager at noblechairs

Expect to see the striking noblechairs Fallout and DOOM Edition gaming chairs in this quarter, on sale primarily through OCUK and Caseking in the UK and EU. Plus, its more than possible that youll be able to catch them on a livestream near you, ably showcased by some of your favourite streamers and content creators. Keep your eyes on noblechairs.co.uk and their socials for updates.