Our intrepid reporter David caught up with Noctua at Computex 2019 to discuss both the next-gen D-series CPU cooler and that bizarre desk fan powered by an NF-A12x25 fan. Check both interviews out below: 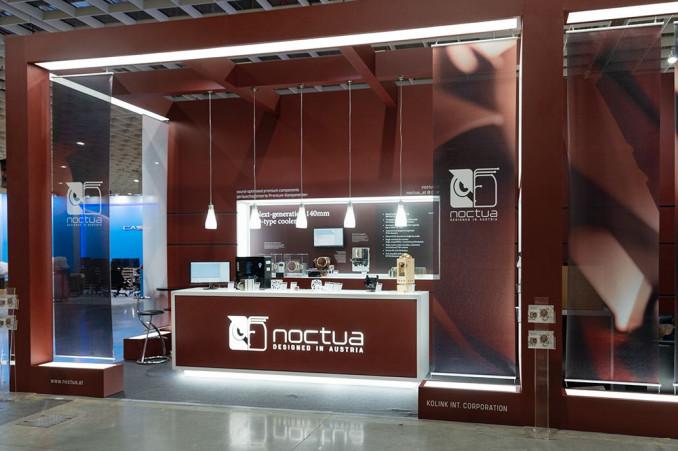 Noctua are back at Computex this year, and with then they've brought a taste of things to come to enthusiast cooling in 2020 and beyond. Well known for their expertise in high-end air cooling, Noctua are once again exploiting their strengths to squeeze just a little more from each design style with the ultimate aim of keeping your PC components cool with as little noise as possible.

Of those items we saw the one we're most excited for has to be the return of the 140mm D-type twin-tower CPU coolers. The NH-D14 is a particular favourite of ours and widely regarded as one of the best air coolers ever produced, a rival for some of the best closed loop liquid cooling has to offer. 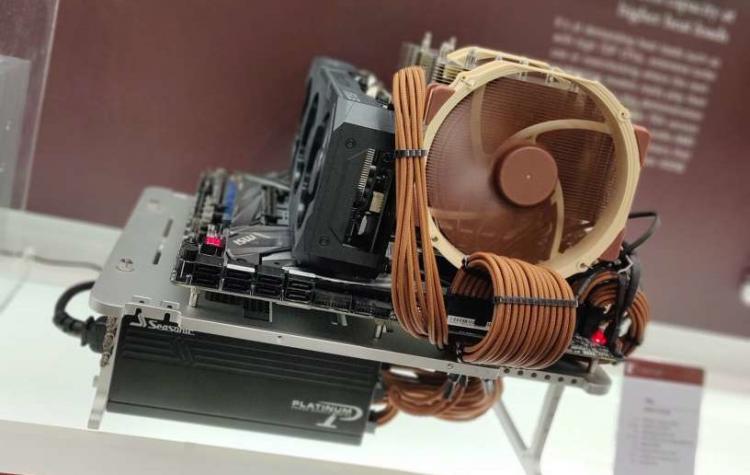 The next generation of D-series coolers is broadly based on the NH-D15/D15S but with a number of subtle differences you might miss at first glance. The design now incorporates 7 heatpipes instead of 6, increasing the rate at which heat can be drawn away from the coldplate. This update may have even more impact on CPUs with larger surface areas being cooled, such as AMD and Intel's HEDT chips.

Speaking of HEDT chips, the design incorporates flexible and robust mounting options for LGA11xx/LGS20xx and AM4, plus a dedicated AMD Socket-TR4 variant is also in development.

Other tweaks include 10% more fin area to improve heat dissipation, asymmetrical fin stack alignment to improve PCIe clearance, up-to 65mm memory DIMM clearance in single-fan mode due to cut-outs in the fin stack, and single and dual-fan versions. This next-gen cooler is rated at up to 400W for TR4 AMD Threadripper CPU cooling and is bundled with NF-A15 fans and new NT-H2 thermal compound. Expect them in Q1 of 2020.

Staying with CPU coolers, Noctua are also demoing a fanless prototype design for cases with good internal convection characteristics. Rated at up-to 120W in such configurations, and higher if actually augmented with fans, it should be adequate for many high performance mainstream CPUs sitting at stock settings and ideal for semi-passive setups. An asymmetric design once again helps with PCIe clearance while RAM clearance is universal. Expect it some time in 2020. 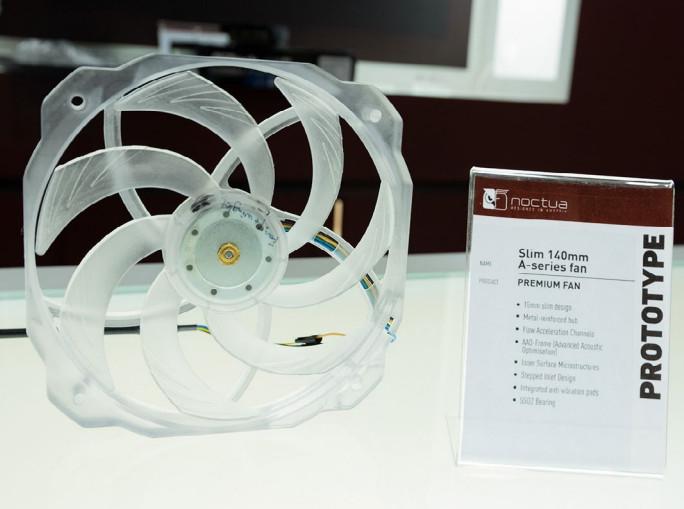 Moving to case fans, Noctua's A-series is undergoing a fairly broad expansion with 50mm-140mm Slim models. Designed with slimline 15mm Advanced Acoustic Optimisation frames but also including an adaptor for 20mm fan mount requirements, they also feature microstructures on the blade insides to improve air flow. Utilising an SS02 bearing and metal-reinforced frame, mainstream users will be happy to see the inclusion of anti-vibration pads to keep noise low. 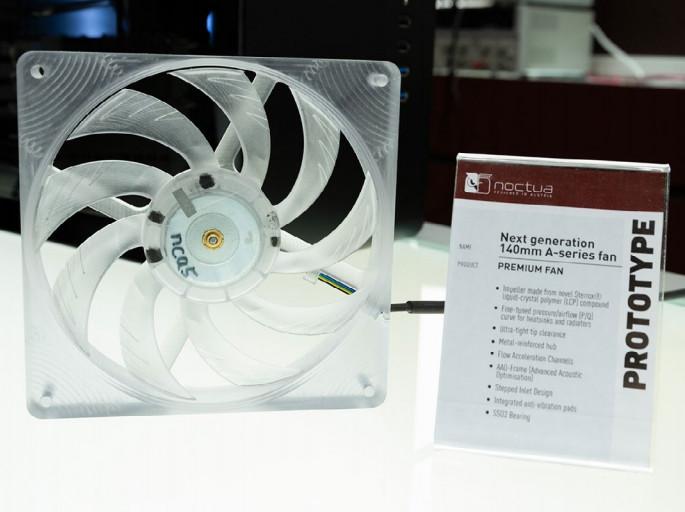 Meanwhile, the classic A-Series fan series is also being refreshed in the near future. The design appears more tightly engineered with smaller tolerances and a fine-tuned curve for operation in tandem with heatsinks and radiators. The impeller is made from Sterrox liquid-crystal polymer, a tough but light-weight material that should improve long-term durability.

Currently, Slim A-Series Fans are due to be phased in over the course of 2020/21, whereas the A-series refresh is scheduled for 2021. Oh, and smaller Slim models should also ship in 5V and 12V variants with and without PWM functionality. 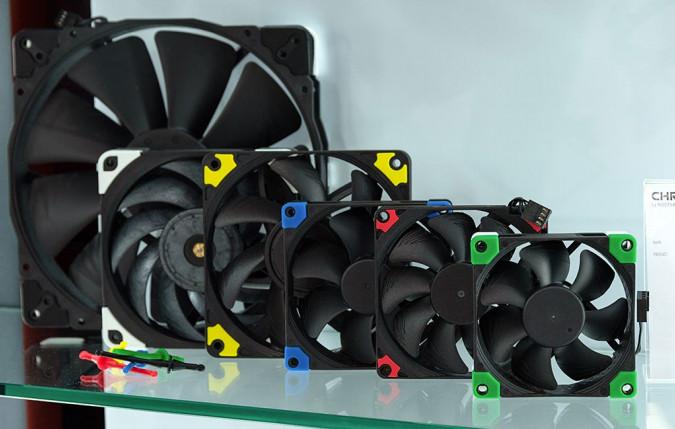 Noctua's Chromax range are a rare nod to aesthetics from a company famous for its brown fan colours. Their chromax.black.swap fans follow an attractive all-black design, but also incorporate some customisation in the form of coloured anti-vibration pads, cables and rubber mounting pegs. The range of models will be expanded throughout Q4 2019 and into 2020, filling out with A-series variants such as the NF-A20. 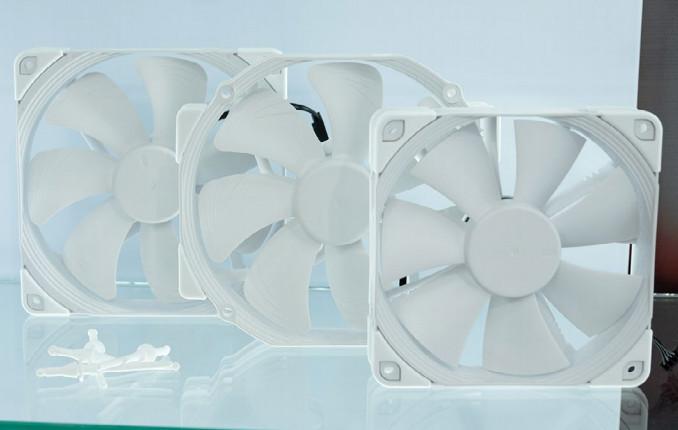 In another new twist, white chromax will also be available starting in 2020 based on the award-winning NF-A15 PWM, NF-A14 PWM and NF-F12 PWM fans. Compatible with the same coloured chromax accessories, they're sure to be a great addition to all-white and monochromatic system builds.

Furthermore, the chromax black line is expanding into CPU coolers with models based on the high performance NH-D15, mainstream NH-U12S and low profile NH-L9i. They will include black anodised exteriors, anti-vibration pads and cables. Like the fans, they will also incorporate optional coloured accessories for just a hint of colour accent. Their current ETA is Q4 2019. 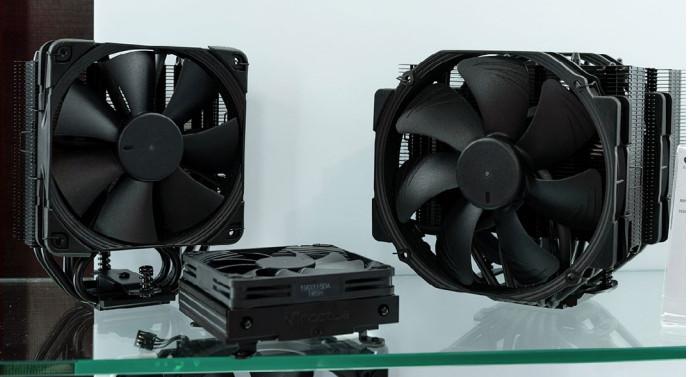 And finally from chromax are a set of heatsink covers for the single-tower NH-U14S CPU cooler (including the TR4 version). These black or white tower covers tidy up the look of Noctua's top-end mainstream heatsink when mounted in a traditional PC tower, and the black version offers interchangable colour inlays. They'll be available in Q3 2019, and are a great partner with the NF-A15 HS-PWM chromax.black.swap fans. 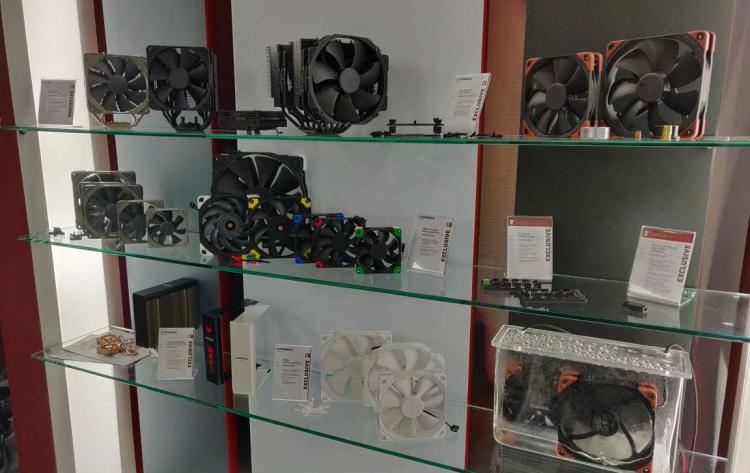 Rounding out the new products are a handful of quirky new members of their portfolio.

Noctua's 24V to 12V DC-DC step-down converter allows the running of 12V Noctua fans in 24V environments. They're touted as an alternative solution in 24V based 3D printing and industrial applications, and still allow for PWM control and RPM monitoring.

Output voltage scales with input voltage to allow voltage based speed control, and it supports 1A fans and operating temperatures up to 60C. Other features include integrated protection against short-circuits, overcurrent and overheating; and a safety fuse prevents damage if the unit is mechanically compromised.

Changing tack is an 8-channel PWM fan hub with white status LEDs. Magnet-backed for easy installation inside a PC, it's powered by either 4-pin PWM or SATA connector for convenience sake. Noctua state it's ideally used in conjunction with a NA-FC1 fan controller. 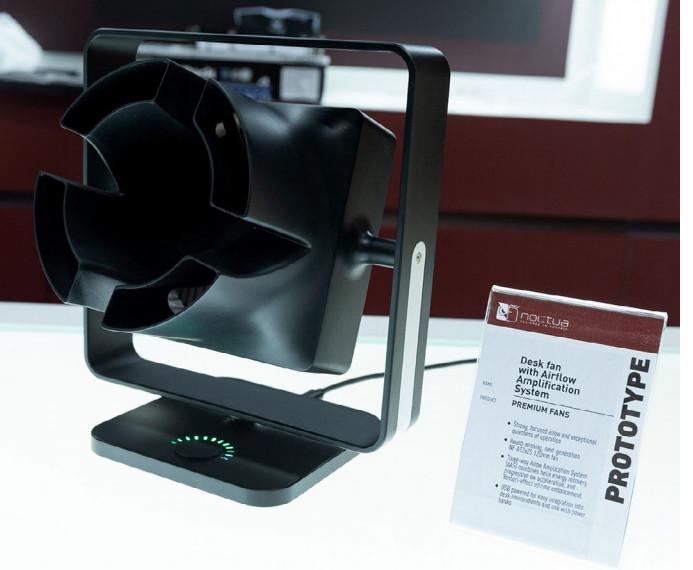 And finally, you can tell that summer is coming because Noctua are tempting poor Northern Hemisphere tech press with a brand new desk fan. Not quite as trivial as it sounds, the fan utilises an Airlow Amplification System that offers a focused air flow despite minimal noise. It's USB powered for broad compatibility with PCs and power banks, so easy to set up in office environments.

We'll have more from Noctua in the very near future, but meanwhile you can find out about the entire Noctua cooling range at Noctua.at