Until now, high-end laptop graphics has generally been deemed a much higher price and lacking performance compared to desktop PCs explained Pomroy. NVIDIA are bridging the gap; the GTX280M and GTX260M offer a huge performance increase at a lower price than the previous 9800M GTX and GT.

Novatech is UKs first to introduce the new NVIDIA® graphics, but also very excited about being Europes first to offer the proclaimed Intel® Core i7 processor in a laptop. Combined with a GTX280M and triple SSD drives in RAID makes the Novatech X90 a strong contender for the fastest laptop in the world.

In a mobile platform, this kind of processing power is immense remarked Amy Page, Production Product Manager, Novatech Ltd. NVIDIAs CUDA and Intels Core i7 processor is a combination that simply cannot be beaten in performance.

The new GTX cards represent increased clock speeds, more shader processors and a 55nm die shrink from the 65nm previous generation 9800M GTX and GT, promising up to 50% performance increase at a lower price. CUDA and PhysX drivers will also ship for the first time directly supported by NVIDIA®, which means updates for the latest games will now be freely available.

More details on the Novatech laptops are available here:
http://www.novatech.co.uk/nvidiamobile 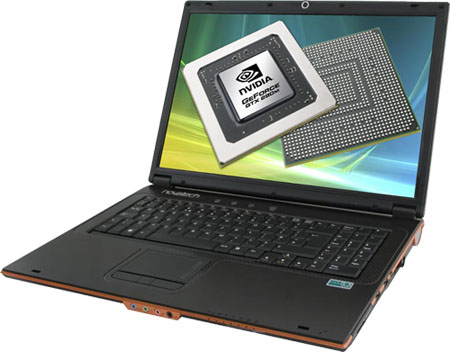