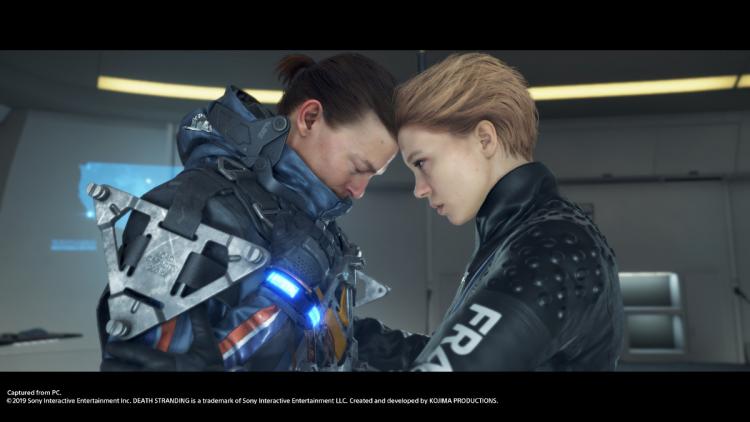 DEATH STRANDING, the latest title from videogame auteur Hideo Kojima (the mind behind the Metal Gear franchise), launches on PC next week after an extended period as a console exclusive. Celebrating the event, NVIDIA have just announced a new promotion which marries possibly the most anticipated release of the summer to their GeForce RTX hardware in the latest 'Buy GeForce RTX' bundle. Plus, existing GeForce RTX owners will be able to take advantage of DLSS 2.0 in-game as soon as it goes live through the latest GeForce Game Ready driver.

From today and until July 29th 2020 new purchases of a GeForce RTX 20 Series GPU can Embark On Their Journey with a copy of DEATH STRANDING on PC (in association with 505 Games). The purchases can be a standalone discrete graphics card, RTX-powered laptop or gaming desktop system (from participating retailers), and game code redemptions are made through the GeForce Experience app. The code provided is for the Steam PC standard edition, worth £54.99 on day of publication.

At launch DEATH STRANDING will be one of the few titles to support the NVIDIA-exclusive feature DLSS 2.0. An important advancement over DLSS, the latest iteration leverages motion vectors in rendered 1080p images as additional inputs to the trained neural network, significantly improving upscaled image quality and offering better performance over content rendered at a monitor's native resolution.

DLSS 2.0's neural network is now generalised to be appropriate for any game, rather than requiring a separate training model for each title. It can boost performance by 2-3x depending on the quality mode chosen, and helps your system achieve excellent frame rates when rendering ray-traced content. Read more about the advantages of DLSS 2.0 here.

To coincide with this bundle and in advance of DEATH STRANDING's release NVIDIA are rolling out the GeForce Game Ready 451.67 driver update. In addition to offering day-0 optimisations for DEATH STRANDING the package also improves support for Horizon Zero Dawn: Complete Edition and F1 2020 on PC. Horizon Zero Dawn: Complete Edition has a planned release date of August 7th.

These drivers incorporate G-SYNC Compatible certification settings for three additional monitors from DELL and Lenovo, helping to improve stutter-free and tear-free gaming on the panels. They are:

A full list of G-SYNC Compatible Displays is available here. Inconsistencies in monitor naming schema by manufacturers could nonetheless result in further confusion, so more research on a specific number may be required.

The driver also implements fixes to a handful of critical issues, most notably a problem with Detroit: Become Human CTD errors; a brace more are identified for resolution in a future update. Improvements from the most recent driver, including support for DirectX 12 Ultimate, are also rolled into this version.

Summarised release notes are reproduced below. The driver supports NVIDIA GeForce GPUs as far back as the GTX 600-series (Kepler), and is compatible with 64-bit versions of Windows 7 and 10.

Changes and Fixed Issues in Version 451.67