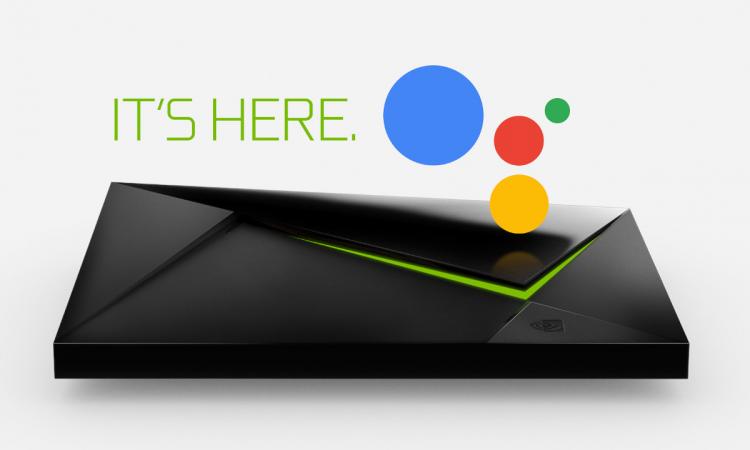 NVIDIAs SHIELD TV is widely recognised as the best home media set-top box on the market today, in many respects despite its largely unchanged hardware since the 2015 launch. While the hardware itself was well ahead of its time for any home media server  the system is based on NVIDIAs Tegra X1 SOC with Maxwell-architecture GPU  the key to its success has been a process of ongoing updates to the latest android software and support for new media standards such as 4K streamed video.

Most recently NVIDIA released the SHIELD Experience Update 7 on May 24th, rolling in Android 8.0 Oreo ahead of the launch of a new feature into the UK and EU market. Finally that feature can be officially revealed: integration of Google Assistant voice control.

Over the next week support for Google Assistant is being rolled out on SHIELD devices across the UK and EU, gradually to balance load and ensure a seamless transition. Its hoped that this rollout will be complete by Monday June 25th, giving all NVIDIA SHIELD users in the region access to this feature.

The Next Generation of Voice: Google Assistant

At launch the SHIELD TV was one of the first set-top devices to implement voice control, leveraging the integrated microphone on the SHIELD Remote and on-board processing. In late 2017 this was augmented by the US rollout of Google Assistant on the SHIELD, providing a more comprehensive set of responses to voice commands, better recognition, and a more powerful API for applications to exploit. With this update Google Assistant will be available across the EU in multiple languages.

Interacting with the Google Assistant is satisfyingly straightforward. Simply say Okay Google followed by a command such as Play Stranger Things and your SHIELD will immediately begin doing so. This functionality extends to other apps that integrate Google Assistant on the SHIELD, such as asking Google to put an item on your shopping app's 'to-buy' list, or querying the next days itinerary.

Google Search is also integrated into Google Assistant, but it doesn't simply throw up a web browser for your query. In some instances it will report back verbally, in others present information in a context-sensitive form, such as a table for sports results, or overlay for pictorial and biographical information on actors. Google's search algorithms are continually learning alongside the Assistant's voice control, with novel but sensible new methods being used to display what's meaningful without increasing clutter.

Through Google Assistant it's also possible to use the SHIELD far more effectively without the TV being turned on at all, simply through voice commands. Pretty handy if music or smart-home control is all you need right at that moment.

Google Assistant was developed using AI learning algorithms, not only in terms of voice recognition but also natural language processing, context-sensitive query analysis and other aspects. To provide the responses tailored to you Google requires access to:

- Web and app activity, which includes your searches, Chrome history, and content you browse on the web and in apps. This info helps your Assistant provide better results and suggestions.
- Device information, which includes your contacts, calendar, and apps, so your Assistant can help with tasks like call a friend or play your favourite music.
- Voice and audio activity, which records your voice and audio input to improve speech recognition.

And can optionally ask for:

- Voice match, which lets your Assistant and the Google app recognize your voice. When this setting is on multiple people can enroll on shared devices, and your Assistant can use your voice to access your personal results like calendar (if you turn on the Personal Results setting) 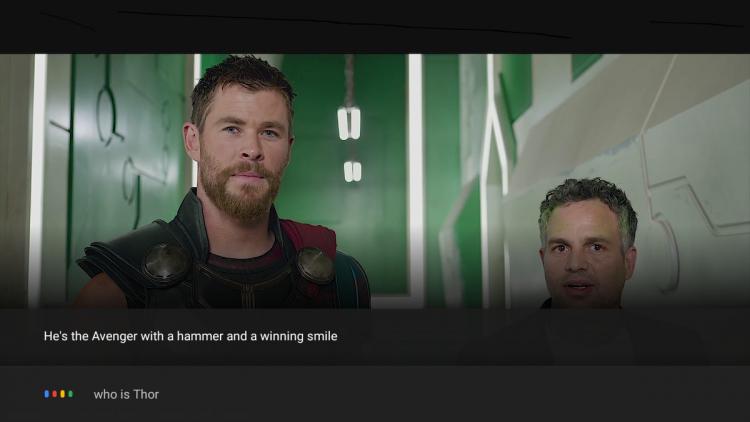 For example: context sensitive queries asked during video playback will appear as an overlay

One current shortcoming of Google Assistant as it operates on the SHIELD is that profiles, differentiating between voices, arent supported. Thats okay for media content, but speaker-distinct profiles, potentially shifting the UI to fit the preferences of the speaker, would be a powerful future tool for multi-person households.

* The Shield Controller is also available separately and is compatible with older models.

A Content-Focussed Approach To UI Design. 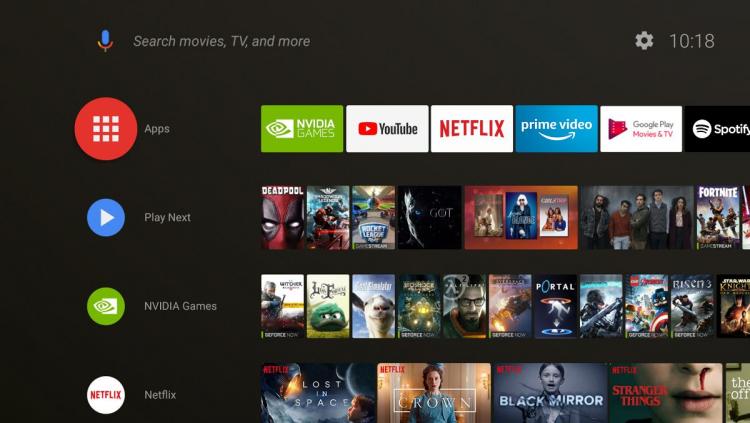 By integrating Androids 8.0 Oreo OS the SHIELD UI substantially changes its focus from dozens of major and minor applications to media content itself. This ethos is very much in keeping with its role as a media and game server, streamlining interactions such that the number of steps required to play content is minimised. The SHIELD isnt a PC or Smartphone and shouldnt be viewed as one; its a powerful and flexible set-top box that will, for all intents and purposes, remain attached to a TV.

So how is that shift expressed? Now the UI layout organises apps as a series of Channels in a manner that has echoes of a content-rich TV Guide. Netflix, Youtube, Google Play, Spotify; each have their own channel, and these channels can be ordered as the user desires to prioritise certain apps over others.

Dominating each application's channel row will be the content available through that application, be it video, music or even games. For instance the Netflix channel might have the most recent episode of a series youre in the middle of watching, followed by the next episode, and then other show suggestions. The idea is that it makes navigating to content you actually want to watch easier, rather than needing to dig through layers of application menus. 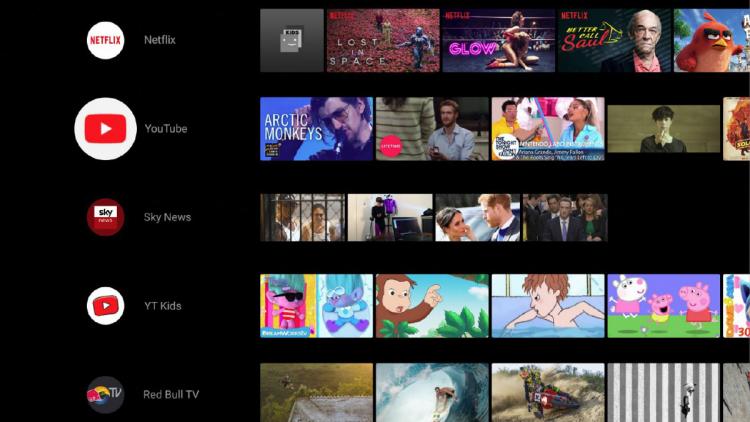 If youre searching for a particular app you can find it in the Apps channel, sitting at the top of the UI by default. The layout doesn't hide these apps away, but they shouldnt get in the way of the user experience. Meanwhile the Play Next row displays content such as TV shows, music and games that you may be in the middle of watching. This content is selected intelligently, but individual shows can be added to Play Next as desired.

The concept of channels extends beyond video content into gaming, where the NVIDIA app channel presents games available natively or through their streaming service.

The SHIELD TV As A Home Hub

SHIELD Experience Update 7 and integration of Google Assistant builds on the SHIELD TVs position as a home hub for content and smart home technology. It supports Chromecast for additional video feeds and casting audio to remote speakers in other rooms, can adjust ambient lighting and even interface with Nest Smart Home Thermostats. And, as a part of the Google ecosystem, new hardware and software applications are being introduced all the time.

While Experience Update 7 primarily deals with the transition to Android 8.0, it's easy to lose sight of the SHIELD as a gaming device. The system still retains all its capabilities in that arena, including the low-latency GeForce Now streaming services, local streaming from your NVIDIA-powered PC, and native games.

In total literally hundreds of games are available on the SHIELD, which is well tailored towards console-specific titles thanks to the robust Rumble Controller. The catalogue of titles now includes:

Crashlands - Enjoy an out-of-this-world action-adventure game set in a world of hidden magic and high technology.

Morphite - Immerse yourself in this exploration-based, sci-fi, first-person shooter that will have you research plants and animals, battle hostile entities, and unravel a mystery.

Dandara - Defy gravity, discover mysteries and secrets, and survive against enemies bent on oppression in this Metroidvania-style 2D platformer.

By using game streaming with SHIELD you effectively have remote access to a high performance gaming PC in the comfort of your living-room, bringing with it high-quality graphics and rock-solid frame rates. Not bad for a fanless system that costs less than a GTX 1060. 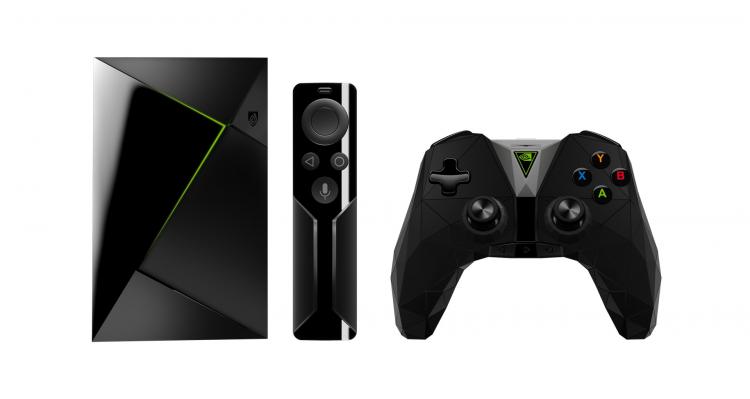 NVIDIAs SHIELD range has undergone some streamlining this year, prompted at least in part by improved software making the use of external storage options more convenient. It now comes as standard with 16GB of internal memory, which can be expanded through the use of USB storage; the SHIELD Pro model which also integrated a 500GB mechanical HDD has been discontinued, but still receives the same Experience Updates.

Two retail packages are available. The SHIELD TV with Remote and Rumble Controller is priced at £189 inc. V.A.T., whereas a slightly more limited Remote-Only option is a little cheaper at £179. Given the flexibility of Google Assistant and that the Controllers built-in mic is always listening, the controller-equipped version may be a very prudent choice even if you dont intend to play games.

Separately, the SHIELD Remote is priced at £39.99, while the Controller is a wince-inducing £59.99. A stand for the SHIELD, which holds the system upright, is also available at £19.99.

Despite content wars and changing standards the SHIELD TV is probably the best home media set-top box available today due to an ongoing commitment to meaningful updates on long-standing hardware, broad support for content standards, and its position as a premier platform for Googles ever-broadening toolkit available to developers. In a market where hardware is almost as disposable as software, the SHIELD continues to thrive.

Check out more on the SHIELD and new functionality at http://shield.nvidia.co.uk.