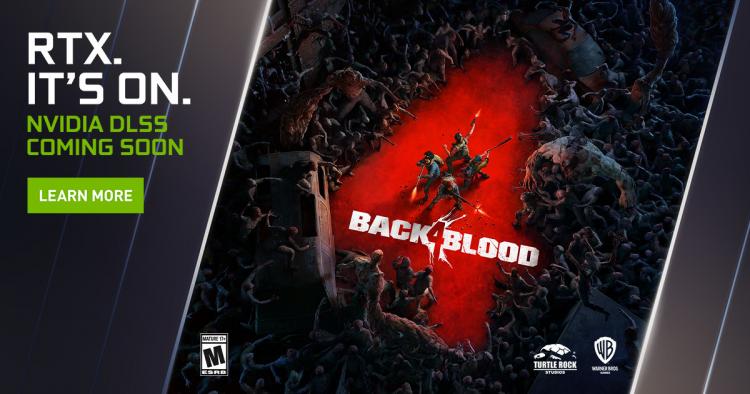 NVIDIA's AI-powered upscaling technology DLSS has a head of steam behind it now, with new games announced as supporting it seemingly every week. That's not a surprise either; DLSS upscaling remains the major feature exclusive to NVIDIA graphics hardware, and offers genuine performance improvements with only minimal image quality degradations (now that it's in its second major iteration). The story remains true this week as the green team reveal a pair of games that will add the technology to their options panels.

The bigger of the two titles is undoubtedly Back 4 Blood, the upcoming team-based zombie shooter from the makers of Left 4 Dead and Evolve. Such titles are frequently designed to run well on relatively underpowered hardware, but pushing higher frame rates from the top to the bottom of the RTX food-chain will always be a highly desired outcome. Although it will offer performance benefits at 1080p, it's likely to be at 4K where the biggest meaningful gains are seen. Back 4 Blood is scheduled for release in October.

So you'll be waiting a little while for the DLSS-powered zombie gore-fest, but that not the end of today's announcements. Escape From Naraka by XeloGames, a small Indonesian indie developer, features ray-traced shadows and reflections, RTX Global Illumination, and (you guessed it) DLSS. The game may fly under the publicity radar a little - a reality of the market that so many indies have to deal with - but they're certainly not skimping on advanced rendering technology. Escape From Naraka launches on July 29th.

Yesterday NVIDIA also demonstrated a major development for gaming outside of the conventional PC- and console-centric gaming environments. Exploiting their strong links with the ARM processor platform (the acquisition of ARM remains pending regulator approval), NVIDIA have paired an Arm-based MediaTek processor with a GeForce RTX 3060 to run a pair of technical demos featuring RTX features including ray tracing and DLSS. The team also created a special build of the Bistro demo running on ARM and with real-time ray tracing and NVIDIA Optix AI-Acceleration Denoiser enabled. In-so-doing they're also bringing these features to Linux to the first time.

The two demos were made possible because NVIDIA ported several RTX SDKs to work on Arm devices, including:

You can read more about NVIDIA's efforts to bring RTX to Arm at https://blogs.nvidia.com/blog/2021/07/19/geforce-rtx-arm-gdc/