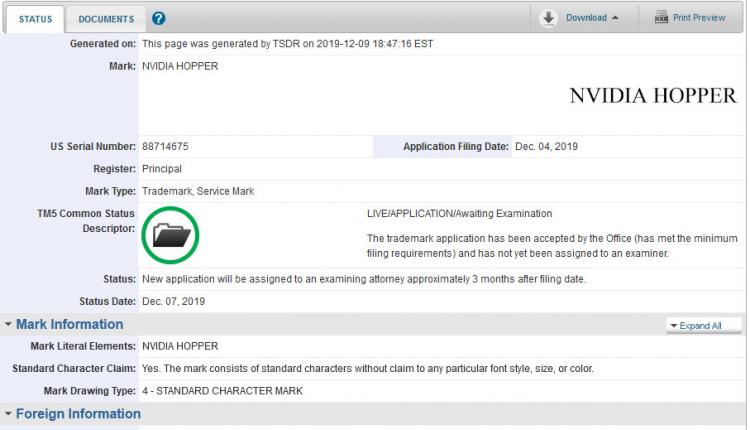 A new trademark application by NVIDIA appears to have revealed the name of next-generation GPU architecture, prior even to the launch of products based on Turing's successor. NVIDIA 'Hopper' would continue their tradition of architecture codenames inspired by some of the pre-eminent mathematicians and scientists of the past, making Grace Hopper the second woman on that short list after Marie Curie (for whom the GeForce 6 & 7 architecture was named circa 2004).

Grace Hopper was an exceptional computer scientist and mathematician who also served in the US Navy from 1943 to 1986, reaching the rank of rear admiral. She was part of the team who developed UNIVAC I, was instrumental in creating the first compilers, and was a guiding light in formation of the machine-agnostic COBOL Programming Language. Her shadow looms large over modern computing, and naming a GPU architecture for her would be a fitting tribute by NVIDIA.

The trademark application is very similar to that for Turing, Maxwell and Kepler before it, offering an additional degree of confidence that it refers to a new GPU architecture specifically.

Turing currently rules the roost of GPU architectures, dominating performance charts and feature lists while also forging ahead with real-time ray tracing and the inclusion of dedicated hardware resources for deep learning inferencing. Ampere - Turing's successor - is expected some time in 2020 on 7nm; Hopper could be as far off as 2022.

Even if we now know the architecture's name, we know far less about its features and capabilities. It's been speculated that Hopper will utilise a Multi-Chip Module (MCM) design, an approach which worked well for AMD's Ryzen CPUs and could allow for improved performance scaling and lower manufacturing cost, and it's exciting to contemplate the effect that would have on nascent technologies such as real-time ray tracing. But that is very much for the future.

Next year's tech launches start early with CES 2020 in January, at which NVIDIA will surely have a presence. NVIDIA's own GTC 2020 meanwhile is slated for the end of March; don't be surprised if the name is brought up at the event alongside Ampere for some free positive PR.