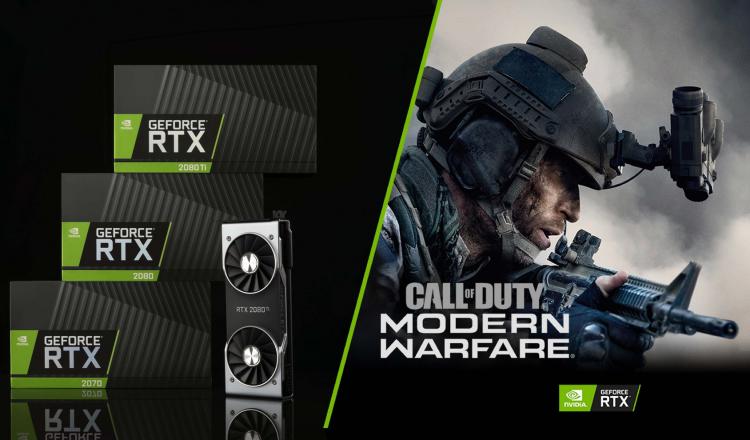 It's fair to say that Activision's Call Of Duty: Modern Warfare is the likely to be biggest release of this launch window, on PC or Console, and NVIDIA have gotten in at the ground floor with a development and retail bundle partnership for the PC. In addition to the GeForce RTX Call of Duty: Modern Warfare Bundle, the green team are equipping the game with RTX ray-tracing support and preparing GPU drivers for the challenge from day one. Complementing this level of support is a series recommended specifications, detailing what to expect in terms of performance at a given resolution and (NVIDIA-powered) system configuration. All in all, it's well worth digesting if you're planning to be first through the door this Friday.

NVIDIA's GeForce 440.97 WHQL drivers are the Game Ready update for Call Of Duty: Modern Warfare, and they've been optimised with feedback from the beta to provide increased performance and stability - exactly what you need on the launch of a new Triple-A title. Unlike their competition however, they don't tend to call out specific performance differentials from one driver to the next. Nonetheless, it behoves you to update (via geforce.com or GeForce Experience app) if you're in this instance.

In addition to RTX ray-tracing, these drivers will also unlock NVIDIA Ansel and NVIDIA Highlights support, helping you to squeeze the most from your first day experience in solo and multiplayer. Those so inclined can also take advantage of one-click in-game settings optimisations available through the updated GeForce Experience desktop app.

CoD: Modern Warfare isn't the only title released this week. Joining it on October 25 is The Outer Worlds, developed by veteran studio Obsidian Entertainment. This first-person single-player RPG is sure to be a more sedate experience, but without top-quality stability, and thematically appropriate graphics, games such as these can be an exercise in tedium rather than escapism. Thankfully, the 440.97 Game Ready Drivers also implement optimisations for this title too.

This driver is also noteworthy for implementing windowed G-SYNC in OpenGL and Vulkan, a much requested feature amongst a particularly loud minority of gamers. Plus, the driver rolls out fixes for a handful of niggling issues, most of which in this case are game-specific.

As always, you can find select your relevant GeForce drivers at GeForce.com, or download them automatically through the GeForce Experience app. These drivers support NVIDIA GPUs as far back as the Kepler-series (GTX 600), and are compatible with 64-bit versions of Windows 7 and 10.

Provides increased performance and the optimal gaming experience for Call of Duty: Modern Warfare and The Outer Worlds.

G-SYNC is now supported on windowed OpenGL and Vulkan applications.
Fixed flashes or frame drops in several Notebook models when running G-SYNC in the lower of the two system refresh rates.

Changes and Fixed Issues in Version 440.97

As with every released driver, version 440.97 WHQL of the Release 440 driver has open issues and enhancement requests associated with it. This section includes lists of issues that are either not fixed or not implemented in this version. Some problems listed may not have been thoroughly investigated and, in fact, may not be NVIDIA issues. Others may have workaround solutions.For notebook computers, issues can be system-specific and may not be seen on your particular notebook.

[Battlefield V][G-SYNC][HDR]: When G-SYNC and HDR are enabled, the game cannot be maximized to full-screen after being minimized to the taskbar. [200558314]
[Grand Theft Auto V]: The game frequently crashes.NVIDIA is working with the application developer to resolve the issue.

There are currently 504 user(s) online:
Google