Reviews are now available and retail pricing has been released for a whole host of NVIDIA GeForce RTX 2080 Ti graphics cards. Unfortunately enthusiasts will deep pockets will be experiencing a certain amount of deja vu this week as NVIDIA's flagship GPU has been hit with another delay a week after it was due to be in stores.

As reported by ComputerBase.de, NVIDIA Online Store pre-order customers in the US and EU have received emails declaring that their RTX 2080 Ti Founders Edition's arrival would be postponed by a further week. US customers were told that cards would be shipped on October 5th, while those in the EU were given a shipping window of October 5th-9th. That has to be a pretty big disappointment for those who threw down £1100+ on the new flagship and perhaps other complementary system upgrades. 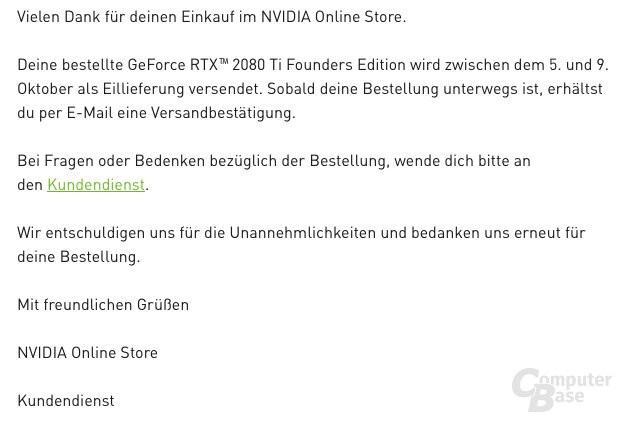 Meanwhile, questions remain about stock availability through the traditional retail and etail channel. ComputerBase state that two German retailers have either pushed availability into October or removed ETAs entirely on almost all of their RTX 2080 Ti stock. In the UK many partner cards sold by the likes of SCAN and Overclockers UK also lack firm ETA dates, although a few (such as the MSI RTX 2080 Ti DUKE OC at SCAN) retain their Sept 27th availability. That said, today some SKUs were also updated to be arriving on October 5th, or even later.

Behind the scenes there have clearly been a few problems with getting the RTX 2080 Ti on shelves, potentially exacerbated by stronger than expected demand despite the cards' high price. But with RTX-enabled titles not due for some time to come it's unlikely that the delay will impact the GPU's popularity in the long term.