Leaked images have surfaced showing a SPARKLE branded 'GTX 595' cooler, PCB and specifications. With the recent GTX 590 release not making as much of a splash as anticipated, could this be the Fermi chips swansong, propelling it more certainly to the top performance spot? The specifications would certainly suggest so. 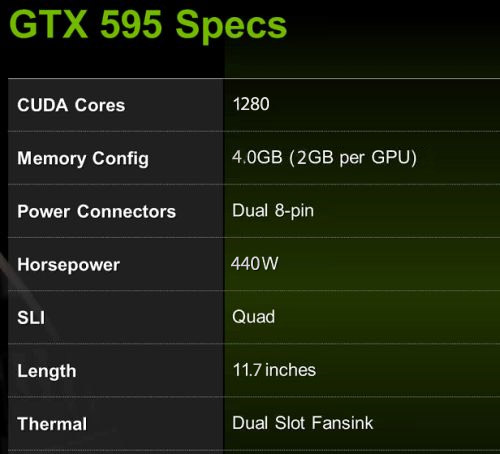 The amount of VRAM has been upped to match the HD 6990's 4GB, as well as an increase in the number of CUDA cores, suggesting the Fermi chip may have been refreshed to increase performance. With no known release date at this stage, we could also be looking at a one-off chip from Nvidia to put AMD to shame. This means the card is likely to be quite pricey. Dual 8-pin connectors remain the same as the GTX 590, but the TDP is increased to just below the theoretical power limits for this configuration and similar to the HD 6990 in the overclocked BIOS mode (which claims up to 450W TDP). Length has also increased from the GTX 590, but it's most likely this will be in the form of the 3rd party cooler and not PCB itself - see below.

We've only seen the top PCB, which suggests OEMs are, sensibly, utilising a similar layout to the GTX 590

PCB layout at a glance looks very similar to the GTX 590, with a few tweaks. Unfortunately among the leaked images there was not a rear view of the PCB, as this would likely confirm or refute the claims of increased memory (as per the specifications). The most notable feature is what looks like a second on-card bridge chip. The only assumption could be that this is to maximise the bandwidth between the two cards for best performance - Nvidia certainly don't seem to be messing around with this card and it's performance. Essentially it seems like we're looking at what the GTX 590 probably should have been, but wasn't feasible in a timescale to rival AMD. 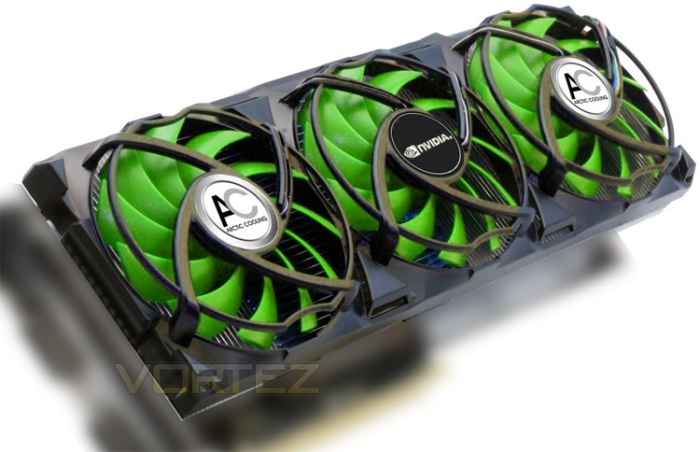 The cooler is Arctic branded with a Nvidia green twist

The cooler, according to our source, is for a SPARKLE branded version of this card, which is clearly an Arctic Cooling model. SPARKLE have employed what looks like the same cooler in their recent GTX 580, but we can only assume this cooler uses an uprated and different heatsink design to deal with the dual GPUs. It will probably also be compatible with the GTX 590, though the reference cooler there appears to cope fairly well.

Evidently, this is very exciting news, though it's likely such a card will be extremely limited in number, and even more limited by price. It looks as though Nvidia aren't prepared to admit defeat with the lacklustre launch of the GTX 590. Perhaps even not a coincidence that we receive these images in the same week as many reports of GTX 590 cards exploding..!

What do you think of this news? Share your thoughts in the forums.

EDIT: Sorry to any of you who got overly excited about Nvidia's new GPU, but I'm afraid I was a less than elaborate April Fools gag! Most of our readers are, of course, way too clever to fall for this, so well done if you spotted that. Have a good weekend all, I promise our next story might be true!