AMD fired a shot across NVIDIA's bow earlier this week with the release of their new Catalyst 12.11 beta drivers, boosting performance on Radeon HD7000-series by large margins and perhaps indicating that their new driver development processes (with a unified development team) is bearing fruit. NVIDIA are never ones to stand still however, and have issued a salvo of their own today through their new 310.33 Beta driver for Kepler GPU's.

In an article authored by Andrew Burns of NVIDIA Tech Marketing, the green team outline improvements realised by the new Beta Drivers by looking at a cross section of games under both the high-end GTX680 and GTX660. This is what they revealed: 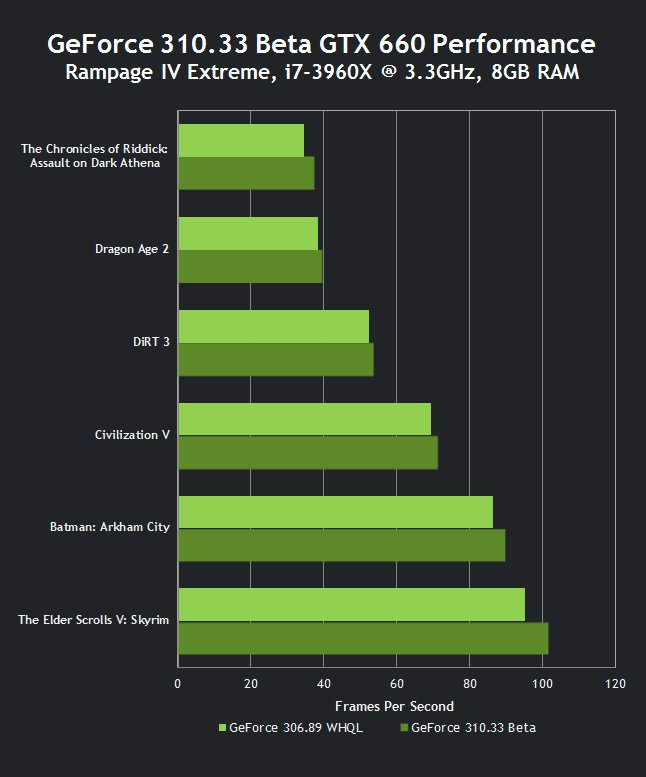 GTX660 performance was improved by as much as 7.5%, including 1080p Skyrim performance gains of as much as 6.2% and 4.5% at High and Ultra presets respectively. 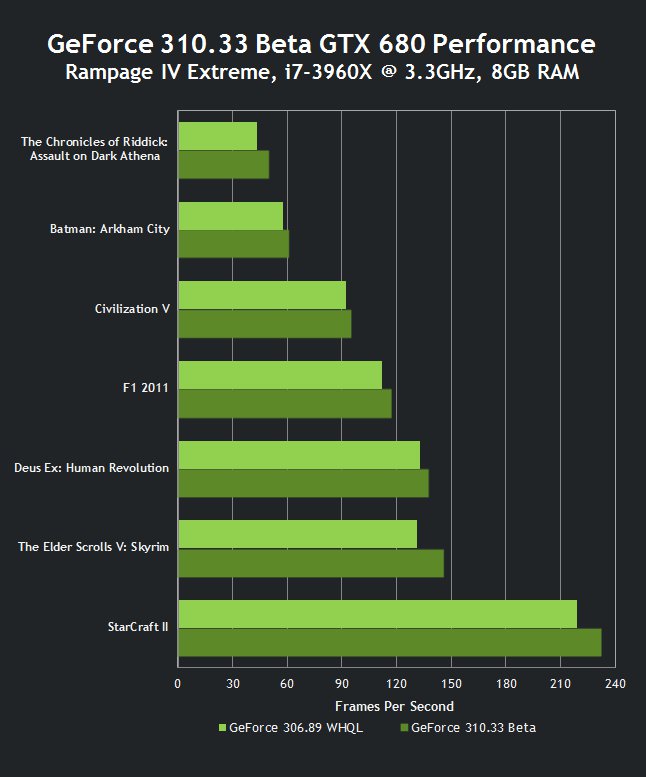 GTX680 performance was improved by a more significant amount, as much as 15% in some cases. Once again Skyrim is a widely cited game which gained particularly, including 1080p FPS improvements of as much as 10.9% and an increase at 2560x1600 of 6.9%.

Single GPU performance isn't the only stated benefit of the new drivers: additional support for ambient occlusion in Counter-Strike: Global Offensive, Darksiders 2, and MechWarrior Online are nice touches which show that the driver team aren't concerned with just raw performance. Improved SLI profiles are also features to be lauded - multi-GPU users will be all too aware of how problematic certain titles can be. Diablo III players will also be happy with MSAA once again being functional.

Finally, NVIDIA have also added/improved support for 3D Vision, that oft-forgotten feature of their high-end cards when coupled with suitable monitors. The vast majority with the correct graphics hardware don't have a suitable monitor, but those who do have certainly shelled out enough to warrant long-term support.

It's not yet clear when the 310.33 Beta drivers will reach release status, but if you want to test them out they are available here. Versions are available for 32 and 64 bit Windows 8/7/Vista.