With any luck the saga of failing NVIDIA GeForce RTX 2080 Ti GPUs is now coming to a close. Earlier this month the manufacturer released a driver update which addressed a particular issue causing 'blue screen' halt conditions, likely caused by a peculiar interaction with specific G-SYNC and multi-monitor configurations, and have now identified a batch of graphics cards that have more pressing hardware faults.

The /r/nvidia subreddit has been littered with reports of hardware failures on RTX 2080 Ti graphics cards, but selection bias and lag in partner card releases made it unclear whether this was an isolated or widespread issue. Manufacturers and retailers continued to report RMA rates well within the norm for the class of card, but of course NVIDIA's direct sales won't be captured in theses figures. 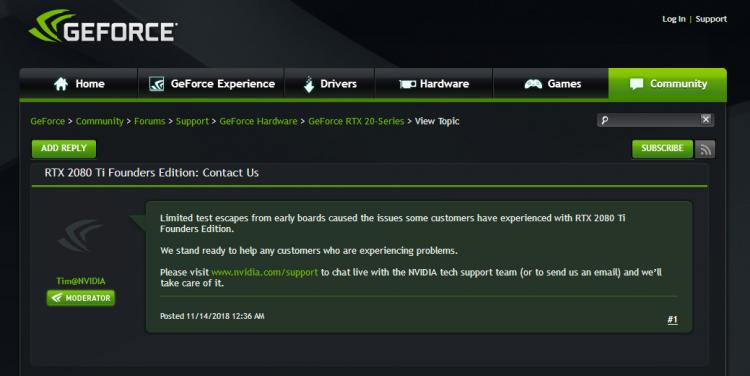 Last week NVIDIA finally responded to concerns, stating that a 'limited test escapes from early boards caused the issues some customers have experienced with RTX 2080 Ti Founders Edition'. As you might expect, NVIDIA will of course be ready to help customers who contact them with problems.

It is something of a concern that faulty cards were marked as passing their quality control procedures and made it into the hands of customers, likely to no-one more so than NVIDIA themselves. As Gamers Nexus notes in their testing of faulty RTX 2080 Ti cards, many failed almost immediately rather than needing to be put through a 'torture test' first.

With RTX features finally being leveraged in games, hopefully this puts an end to the launch period trials of NVIDIA's RTX 20-series cards.