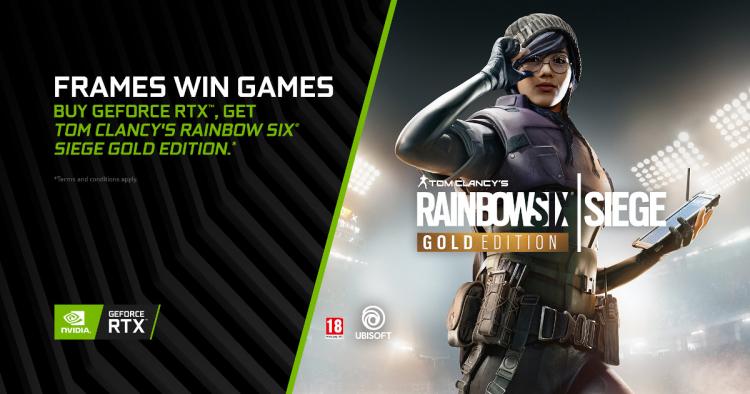 The duo are keen to extol the benefits of high frame rates as a competitive advantage in multiplayer games, and not without justification. Higher frame rates lead to smoother animations and lower system latency, and of course NVIDIA's own research indicates that those who play at high frame rates tend to have higher K/D ratios, but even without any boost to your stats you're likely to be having a better experience overall.

This latest bundle is open to those who purchase - from participating retailers - an eligible GeForce RTX 2080 Ti, 2080 SUPER, 2080, 2070 SUPER, 2070, 2060 SUPER or 2060 GPU-equipped graphics card, laptop or desktop. Each would be exceptional graphics hardware for Tom Clancy's Rainbow Six Siege, with even the RTX 2060 reaching 144fps gameplay under common system configurations.

Tom Clancy's Rainbow Six Siege Gold Edition includes sixteen Operators, special uniforms, skins, cosmetics, and the Year 5 Season Pass, which nets you all six Operators launching during this year, plus VIP boosts, faster Battle Pass progression, and more. Plus you gain access to an esports scene and community with over 60m registered players.

Full info on the Frames Win Games GeForce RTX bundle, including Terms & Conditions and participating retailers, can be found at https://www.nvidia.com/en-gb/geforce/campaigns/rainbow-six-siege-bundle/. The promotion lasts until Thursday August 27th, 2020.