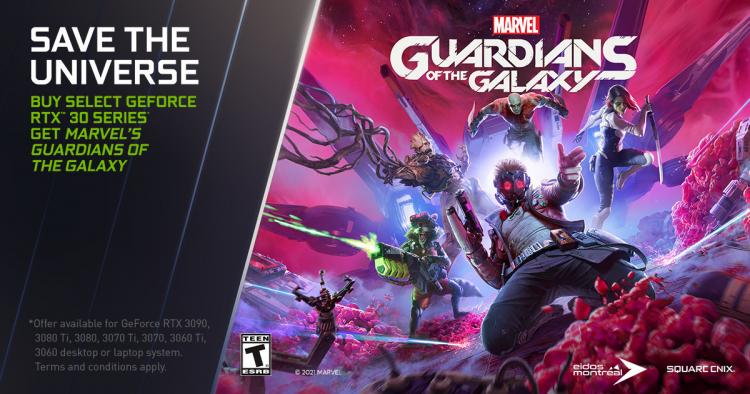 Marvel's Guardians of the Galaxy, Square Enix's videogame adaptation of the juggernaut comicbook property, is scheduled for release on October 26th as a pre-Halloween treat to fans eager for another sci-fi action-adventure fix this Autumn. Not content with supporting the launch though their RTX technology portfolio, GPU architects NVIDIA have just announced a new GeForce Game Bundle that will help prospective players squeeze a little more value from a new system purchased in the coming weeks.

Starting today, systems bought from participating retailers equipped with a GeForce RTX 3060 or better GPU will be eligible for a copy of Marvel's Guardians of the Galaxy when it's released later this month. The system in question can be either desktop or laptop, and any one of the countless RTX 3060-3090 variants manufactured by NVIDIA's AIB partners should qualify. Discrete GPU sales unfortunately don't qualify.

By taking advantage of this deal GeForce Gamers will not only receive the definitive Marvel's Guardians of the Galaxy experience - enhanced with real-time ray-traced reflections and performance-accelerating NVIDIA DLSS - but also feel secure in the knowledge that they're getting the most bang for their buck out of the new system purchase.

You can read more about the bundle at the information page.

The Remastered edition of Remedy's Alan Wake releases today and NVIDIA have announced that the game has been retrofitted with support for NVIDIA DLSS to complement 4K resolution options. Activating DLSS in Alan Wake Remastered can as much as double performance, greatly increasing frame rates at even extreme resolutions or pushing marginal gameplay to a buttery-smooth feast for the eyes. 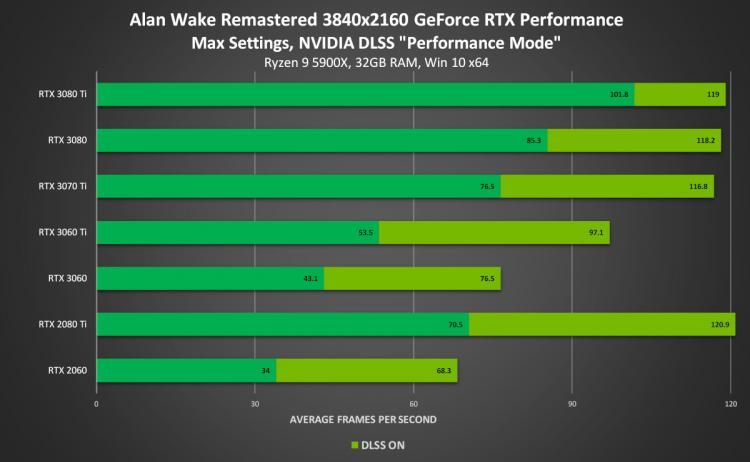 You can find Alan Wake Remastered on the Epic Games Store, where it is available for the princely sum of £24.99.