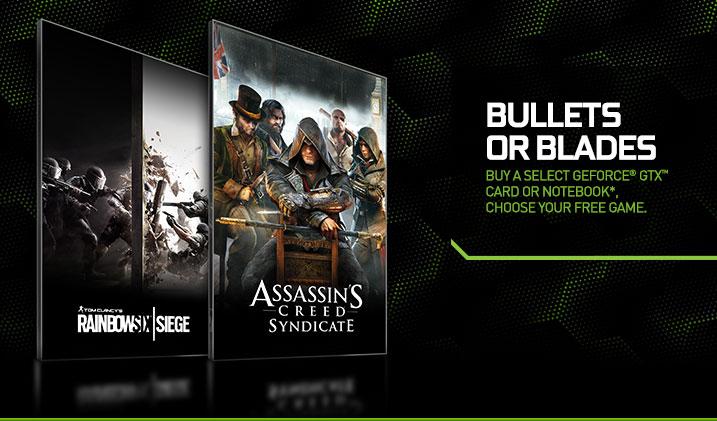 No strangers to free game bundles, NVIDIA are this week going ahead with the first major such deal of Autumn 2015. Featuring two of the most eagerly anticipated titles due for release this year, the Bullets Or Blades GeForce GTX Bundle nets you yet more value with the purchase of a high performance GPU or NVIDIA-powered notebook.

NVIDIA's Bullets Or Blades GeForce GTX Bundle grants you a free copy of Assassin's Creed Syndicate or Rainbow Six Siege with a qualifying GeForce GTX 980 or GTX 970 graphics card, or one of the new enthusiast-class notebooks powered by the GTX 980. The purchase needs to be made from a qualifying retailer however, so ensure that your etailer of choice is part of the deal.

Assassin's Creed Syndicate is developed by Ubisoft Quebec, the first time the studio has taken a lead role in an Assassin's Creed title. Set to debut on next-generation consoles and follow on PC, it's the second Assassin's Creed title of the next-generation era and will build on many of the lessons learned in the development of 2014's Unity. The game backdrop is London during the Industrial Revolution, and in another first has two protagonists who can be freely switched between throughout the single-player campaign.

Tom Clancey's Rainbow Six Siege is another Ubisoft title, this time developed by Ubisoft Montreal (the same mega-studio behind 2014's Assassin's Creed Unity, Watch Dogs and Far Cry 4) using the AnvilNext 2.0 engine. Rather than the third-person action of an AC title, Rainbow Six Siege implements a more traditional first-person shooter style, although heavy emphasis is given to environmental destructibility. Naturally a high-performance GPU would be a major plus.

Game codes can be redeemed here ahead of their respective launches, and likely require a UPlay account to activate. Assassin's Creed Syndicate is due to be released on November 19, 2015 on PC, whilst Rainbow Six Siege follows two weeks later on the 1st of December.