NVIDIA Quietly Roll Out A GeForce GTX 1050 With 3GB VRAM

NVIDIA's graphics card pricing has finally started to normalise towards levels not seen since 2017, and attention has slowly turned towards the future with the anticipated release of the GeForce GTX 11-series, but NVIDIA apparently haven't quite finished with Pascal just yet. A listing for a new model - the GeForce GTX 1050 3GB - has been spotted on the GeForce.com 10-series product page, complete with specs and comparisons against existing models. This is the first GTX 10-series model to be released since the GTX 1070Ti in October, and surely marks the last outing for NVIDIA's Pascal architecture. Surely?

As you might expect giving its SKU, the GTX 1050 3GB has some key specifications in common both with GTX 1050 Ti and GTX 1050 2GB, but the differences are still significant. Most notably, they have the same number of active shaders as the 1050 Ti: 768 CUDA cores, rather than the 640 on the 2GB GTX 1050 variant. They are however clocked faster than the GTX 1050 Ti, pushing just over 1.5GHz under boost mode. 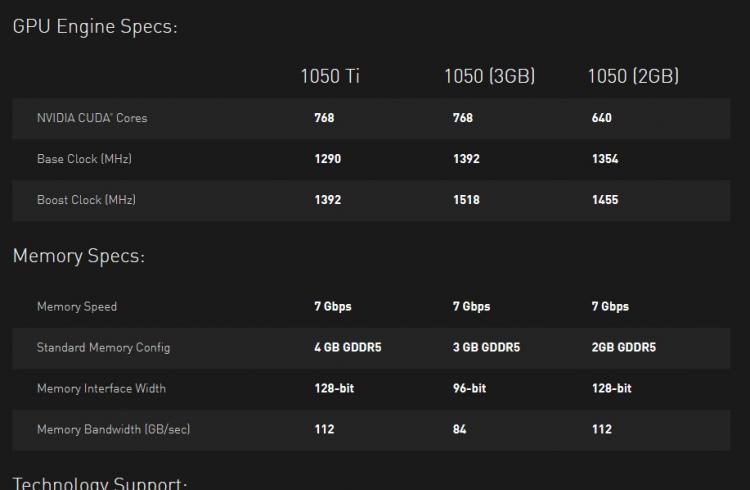 So, it's clear that this certainly isn't the back-door launch of new architecture in an existing series, such as when NVIDIA launched the 1st Gen Maxwell GTX 750 and 750 Ti. In fact not even the channels through which these cards will be sold are obvious, not to mention pricing. It certainly wouldn't be the first time a graphics card SKU has been exclusive to the system integrator and OEM market, if that were to be the case in this instance.

The market for the card is well established however: gamers with very tight budgets looking to game at 720p60 or 1080p60 in popular but less graphically demanding games. Think Overwatch, Fortnite, DOTA 2 and other eSports titles, and you probably won't go far wrong; mass-market is the watch-word, rather than enthusiast.

If it does enter retail channels, expect the GTX 1050 3GB to sit between the GTX 1050 Ti's ~£165 and GTX 1050 2GB's £115 inc. V.A.T., unless a major pricing correction occurs. As for the naming scheme... well, hopefully NVIDIA are a lot more transparent when it comes to differentiating GTX 11-series graphics cards by their SKUs next year.