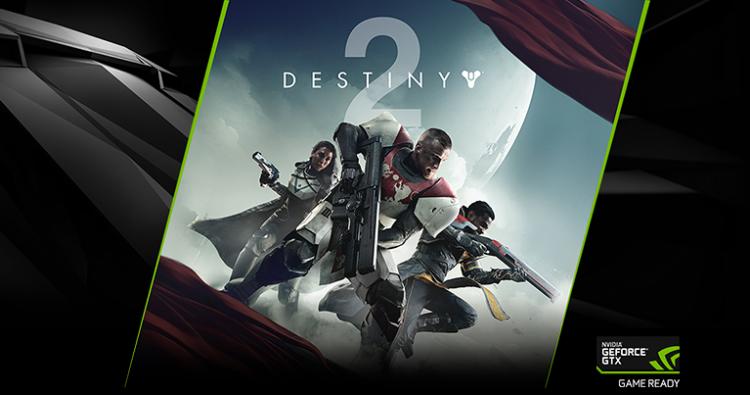 Bungie's Destiny 2 is just around the corner, and in keeping with standard procedure for new Triple-A releases NVIDIA have taken up an advisory role in how to best leverage your existing GeForce GPU hardware for the new title. The Destiny 2 PC Graphics and Performance Guide takes you step-by-step through the configurable in-game settings available in the PC version of the game, and recommends levels which may be best for your hardware. Nifty stuff, no matter the brands inside your system.

It's also possible to make use of the above article as something of a 'buyers guide' on new hardware for Destiny 2, and naturally NVIDIA have something of a sweetner to offer if you're looking to buy a new GTX 10-series GPU and Destiny 2 in the near future. From today and for a limited time new Geforce GTX 1080 or GTX 1080 Ti GPUs purchased from participating retailers will be eligible for a free standard edition of the game. The new GPU can be purchased alone, as part of a system, or integrated into a laptop, so there's plenty of ways to take advantage of the bundle.

Destiny 2 will launch with day one support for 4K resolutions, enabling 4K60fps gameplay on this generation of premium hardware. In order to achieve this with high in-game image quality settings NVIDIA recommends a GTX 1080 Ti, which was ample for the small slice of the action seen in the PC Beta this summer. It will be interesting to see how well optimised the title turns out to be next week.

Destiny 2 launches on October 24th on PC, currently priced at £44.99 through Activision/Blizzard's Battle.net digital distribution platform. NVIDIA's Game Ready Drivers, if updates are required beyond optimisations made for the Beta, will be released ahead of the launch.

There are currently 432 user(s) online:
Google