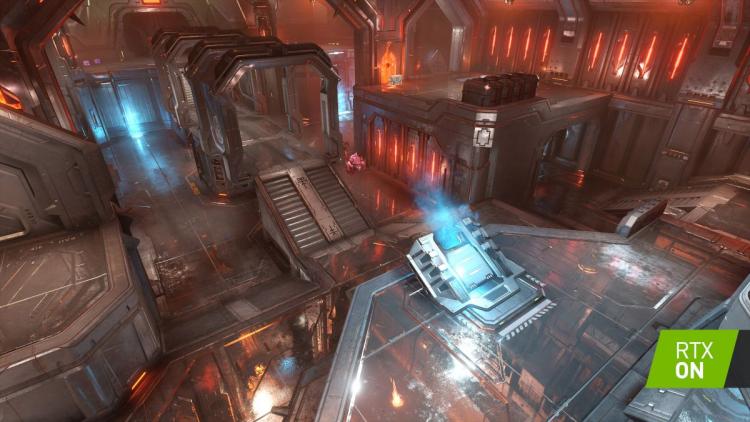 Gamers sporting NVIDIA RTX hardware had reason to be pleased overnight thanks to two big announcements from Bethesda and EA. Battlefield 2042, the near-future shooter scheduled for later this year, has gained an official graphics platform partner in the green team that will be bringing some of their cutting-edge tech. to the game. Plus, DOOM Eternal now finally supports some NVIDIA RTX features, adding to the eye-candy in the title already critically acclaimed for its high-octane gameplay.

DOOM Eternal is the latest game to incorporate hybrid ray-tracing in the form of ray-traced reflections, letting metallic surfaces realistically reflect objects and lighting. This is performed via Khronos's ray-tracing extensions in the Vulkan rendering API.

Ray tracing in any form has performance ramifications, but NVIDIA are on the case with support for DLSS. Only available when playing with RTX-class GPUs, DLSS utilises inferencing hardware integrated into the GPU to process frames through a pre-generated neural network, upscaling to your monitors native resolution. In DOOM Eternal's case NVIDIA are estimating that performance can be accelerated by up to 60% at 4K Ultra-Nightmare settings when running with the DLSS "Performance" preset.

DLSS and ray-traced reflections were both added in the DOOM Eternal patch deployed last night and will require the latest GeForce driver.

Also overnight, EA and DICE announced that NVIDIA will be the official graphics platform provider for Battlefield 2042, bringing both NVIDIA DLSS and Reflex to the game when it arrives on PC later this year. Both Battlefield V and Anthem supported DLSS, and Battlefield 2042 will be the third game powered by EA's Frostbite engine to implement it.

Reflex is NVIDIA's technology that reduces the click-to-screen latency in the game engine pipeline. This will be a critical inclusion for competitive gaming in Battlefield 2042, and NVIDIA clearly believe that it will offer an experience in the game that is second to none.

Dusting the Rust Off

Finally, with a patch on Thursday Rust will gain support for NVIDIA DLSS. The survival game already supports NVIDIA Reflex and with DLSS will gain a new performance option that shouldn't sacrifice image quality.

You can read more about the DOOM Eternal announcement, as well as Bethesdas DOOM Eternal GeForce RTX 3080 Ti Demon Slayer Bundle, at https://www.nvidia.com/en-us/geforce/news/doom-eternal-ray-tracing-nvidia-dlss-upgrade-available-now. A detailed breakdown of DLSS capabilities can be found at https://www.nvidia.com/en-us/geforce/technologies/dlss/.