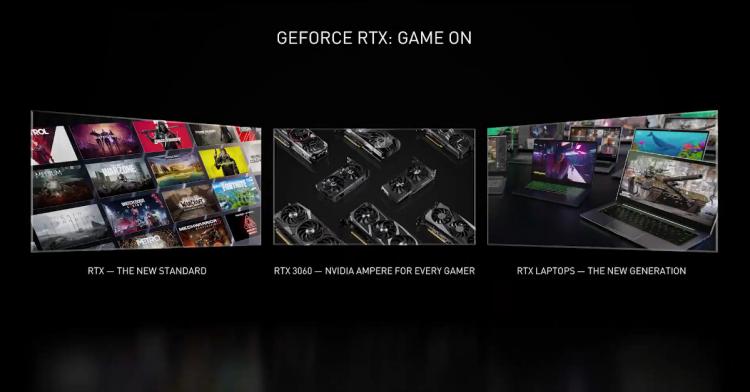 It's technically day one of the CES 2021 virtual summit and more major brands have taken to the airwaves to show off upcoming products, new technologies, and give firm handshakes to their strategic partners. NVIDIA's GeForce RTX: GAME ON livestream event this afternoon focussed a little more on the first two rather than that final one, so it's time to take you through what they have planned for the first part of 2021.

Jensen Huang's absence, and that of his leather jackets, was keenly felt this year

The green team are currently sitting pretty at the top of the food chain thanks to GPUs based on their Ampere architecture, hardware that has set new records for launch demand due in part to the changing conditions of life under COVID-19. While the top end of the market is well catered to by GeForce RTX 30-series cards released thus far, it's high time mainstream segments started to see the fruits of NVIDIA's developments. 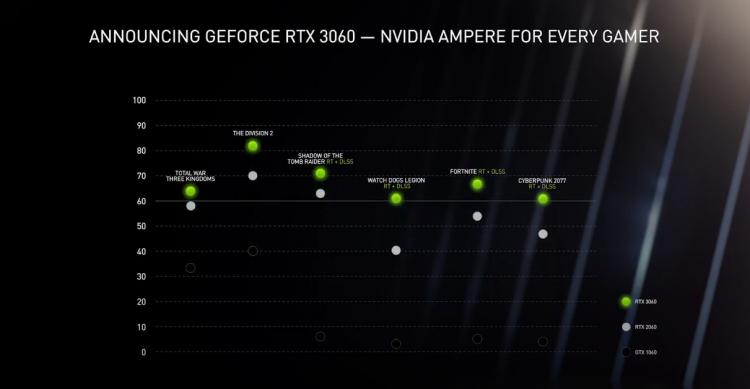 So it's with no real surprise that NVIDIA have announced the GeForce RTX 3060-series, a new set of cards that will slip in just under the RTX 3060 Ti at an MSRP from $329 in the US. It will follow in the footsteps of the GTX 1060, an extremely popular card for mainstream gamers who sought to play their favourite games at 1080p60fps with good or better visual fidelity.

In fact, the old mainstay Pascal card is exactly the hardware NVIDIA believe you'll want to upgrade from, particularly if you're now looking to dabble in titles equipped with real-time ray tracing. The RTX 3060 is billed as 3x faster in rasterisation than its Pascal counterpart, and 10x faster in RTX ray tracing. Pascal wasn't capable of real-time ray tracing and other RTX features of course, but NVIDIA claim that (with DLSS enabled) the RTX 3060 will be well equipped to take on Cyberpunk 2077, Watch Dogs Legion and other cutting-edge titles released in recent months. 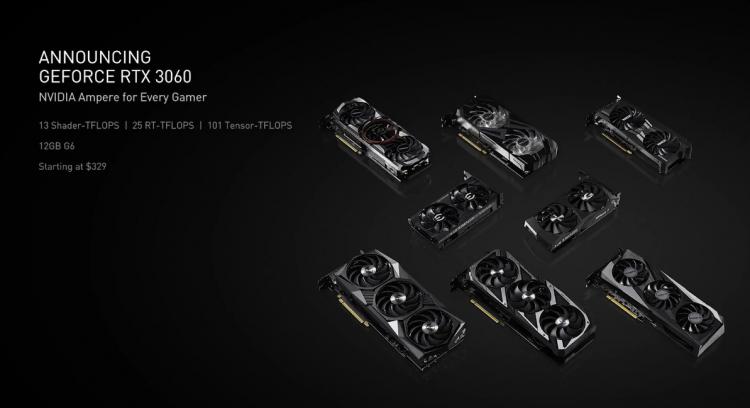 Still, it's a hefty $80 increase in MSRP over the (2016 vintage) GTX 1060, so this new card represents yet another creep upwards in the cost basis of mainstream PC gaming. Is a $330 card really one for 'everyone'...? Maybe, if everyone wants to play one of the modest number of titles on the market with RTX features, and also had pretty flush wallet.

Speaking of those RTX titles, NVIDIA followed on by announcing updates to their growing list of RTX-supported titles:

- Call of Duty Warzone will be getting DLSS, boosting frame rates though the upscaling technology powered by AI.
- Outriders by People Can Fly will support DLSS on release in April
- Friday Night's at Freddy's sequel Security Breach will be equipped with both DLSS and RTX Ray Tracing
- Action Platformer F.I.S.T. (Forged in Shadow Torch) will also be decked out in NVIDIA RTX features
- Rainbow 6 Siege and Overwatch will both be updated to support Reflex low-latency technology

This underscores the importance of DLSS, and brings the total number titles currently or slated to support RTX features to 36. 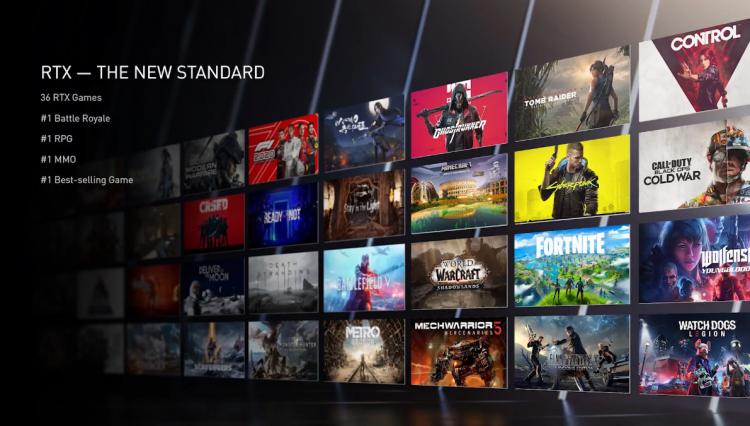 Complementing broadening support for Reflex is the announcement of five more G-SYNC monitors with Reflex on-board. This provides real-time click-to-screen latency statistics for troubleshooting your system's performance in competitive gaming, and is yet another unique feather in NVIDIA's cap. 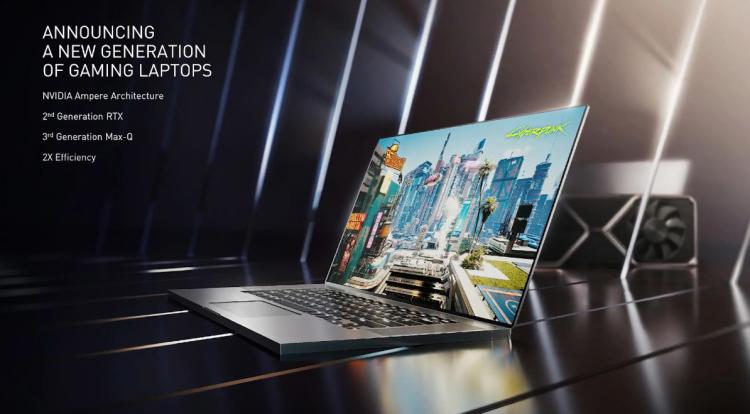 It wouldn't be CES without laptop announcements, and NVIDIA were planning ahead thanks to a little tease from Intel yesterday. Mobile versions of the RTX 30-series are planned for this month, starting with laptops powered by the RTX 3060 and topping out at designed incorporating the flagship RTX 3080. Many of these designs will also be paired with 1440p 240Hz panels, a feature that has been sorely lacking in gaming laptops thus far.

In a first for laptops, RTX 30-series models will support PCIe 4.0, PCIe Resizable BAR (otherwise known as Smart Access Memory when it appears on AMD's 6000-series cards), Dynamic Boost 2.0 to balance power between GPU, CPU and GPU Memory as necessary on a frame-by-frame basis, and Whispermode 2.0 for enhanced acoustics tailor to the model of laptop. They should be true desktop replacements despite their thin and light footprints. 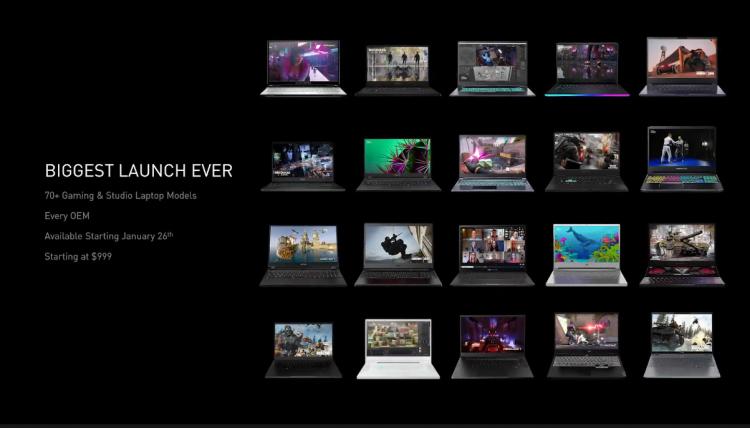 Laptop models equipped with the RTX 3060 will start from $999, and ultrathin Max-Q models of the RTX 3070 and RTX 3080 models from partners such as Acer, MSI and ASUS will also be available. Expect their biggest launch ever, with over 70 Gaming and professional-class Studio models from all OEMs, to be available starting January 26th.

Rounding off the presentation was a short showcase of the new GeForce RTX 3080 Laptop GPU in a new Microsoft Flight Simulator three display demo. Always nice to see that horsepower put to good use.

Which broadly brings us to the end of NVIDIA's RTX: GAME ON event. More detailed information will no-doubt trickle out over the course of the next few days as partners showcase hardware implementations, but the presentation was either 'hugely significant' or 'according to expectations' depending on the value placed on laptop launches. It does not indicate that RTX gaming will be more affordable in 2021, quite the reverse in fact, but rather that the capabilities of the PC as an ecosystem will be higher going into the Spring.

More information can be found by following links on NVIDIA's roundup at https://www.nvidia.com/en-us/geforce/news/nvidia-geforce-rtx-game-on-announcement-roundup.