The upcoming launch of NVIDIA's next-generation Ampere consumer GPUs as the RTX 30-series is perhaps the worst kept secret in technology today, and so it's appropriate that the Green Team are leaning into the speculation by dropping a few juicy hints as we head towards the GeForce Special Event next week. The latest and most telling thus far is buried within a short video showcasing their GPU cooler design and technology development over the years, but it's easy to miss if you're not paying attention.

The video covers relevant topics from thermal factors - particularly optimisation of air flow through the cooler - to aesthetic design, touching on factors important to creating a next-generation cooler from first principles. They highlight some of the key changes in the upcoming generation while also massaging consumer expectations a little through some subtle messaging.

It's no surprise by now that NVIDIA are transitioning to a 12-pin power connector for their graphics card, eschewing conventional 6/8-pin PCIe power connectors. Their rationale is straightforward: the new connector is more compact, taking up less real-estate on the PCB, but rated to carry far higher power. An adapter from dual 8-pin to the new NVIDIA 12-pin standard will be shipped with every new card, but that's going to increase internal cable clutter just slightly until PSU native cable design adapts. 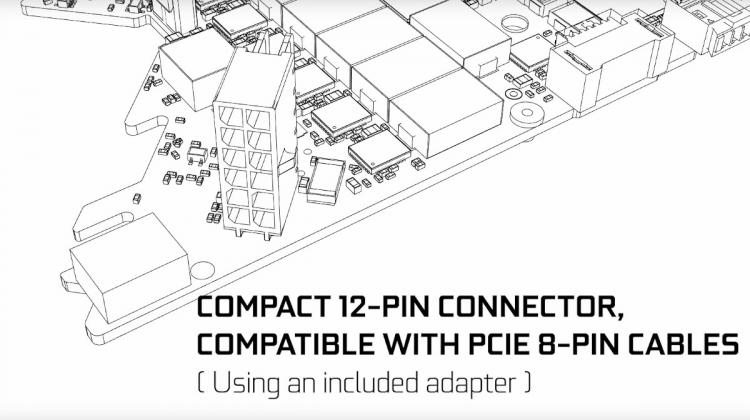 While the connector is more compact, it also appears to stand higher than the older connector type and may need to be anchored more firmly to the PCB. Achieving a nice low profile custom water cooled solution for the reference card might be a little difficult and many partner card cooling solutions will need substantial redesigns.

NVIDIA are also redesigning the cooler retention system to a leaf spring around the GPU socket rather than a set of discrete spring-loaded mounting points, the aim being to firmly hold the cooler in place while allowing a heatspreader to be located over the top (and hence masking it from view).

But beyond that, the wording and visual language NVIDIA's engineers are using is very deliberate. They discuss driving more power through the GPU (made possible by the improved cooling and power delivery), implying it's a necessary evil for higher performance. When showing the reference designs from 6:25 onwards each card appears to be slightly larger than the last, even if that doesn't quite jive with reality. Both may be unintentional, but the impression given is that the new GPUs are power hungry, dissipate a lot of heat, and require a huge cooler to keep it in check.

The GeForce Special Event hosted by Jensen Huang begins at 9am PDT (5pm BST) on Tuesday September 1st. Expect plenty of surprises, plus the latest in RTX visual technology and the long-awaited RTX 30-series.