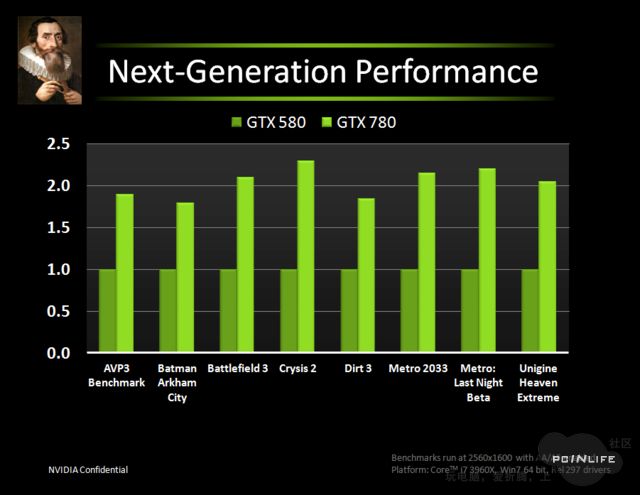 In what's possibly the oddest leak of this years' technology silly-season, we have the above slide showing off benchmark figures of a GTX 780 vs GTX 580. If true, it implies heavily that NVIDIA are skipping the 600-series entirely and moving straight to 700 for their performance Kepler part. It wouldn't be the first time: NVIDIA released only a few low-end OEM parts on the 300-series before pushing a total line-up refresh through the 400's. The question is whether they'd want SKU's similar to the AMD 7000-series - it could very well end up back-firing in marketing.

As for the performance numbers - even if were weren't taking the authenticity of the slide with a pinch of salt the usual issues for marketing blurb applies. If we assume cherry-picked cards, it's certainly possible that a memory-starved 1.5GB 580 GTX vs a 3+GB 780 GTX with additional architecture efficiencies could see 1.8x improvements in memory intensive benchmarks. However, ones gut instinct is that an effective doubling of speed across the board is unlikely at best.

NVIDIA Kepler-based 28nm cards are due Q2-2012 and are set to compete with AMD's Graphics Core Next GPU's expect early next year.