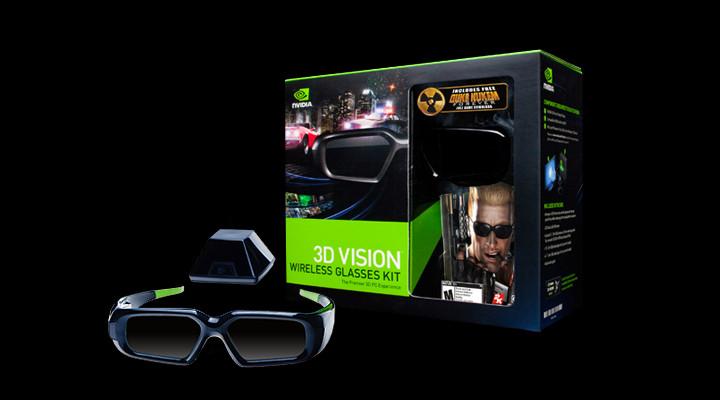 If there's one once-core NVIDIA technology that never really lived up to expectations, it's probably 3DVision. Envisioned (if you'll pardon the pun) as a means of bringing 3D gaming to a wider PC audience, it was briefly heralded as the harbinger of a new era in those heady years just prior to 2010.

The core technology of 3DVision wasn't a new one. Based on LCD shuttering lenses operating at 60Hz, it generated a stereoscopic image by alternating frames intended for the left and right eye. This required both that the screen operate at 120Hz - not altogether common at the time - and remain in perfect sync with the 3DVision Glasses lens shutter.

After four years a little more than thirty games were certified as 3D Vision Ready, while others could be adapted with mixed results. That figure has ballooned by an order of magnitude today as the techniques used to retrofit support improved. However the bespoke nature of the technology, relatively high hardware requirements (games realistically needed to run at an equivalent of 120fps) and paucity of hardware support meant that it never really caught the imagination of PC gamers. Even offering an avenue for adapting 3DTVs to 3D gaming wasn't enough to catapult it to prominence.

A death-knell sounded for 3DVision when Oculus produced the first prototypes of the Rift HMD, and with it a far more immersive 3D experience. However NVIDIA's investment in 3DVision wasn't wasted. Lessons learned in 3DVision could be applied to the fledgling Virtual Reality field, it pushed forward gaming monitor panel development into the 120Hz and 144Hz range, and the most popular monitor model from ASUS served as an early platform for G-SYNC research and an eventual retail release. Not bad for a technology sometimes derided as being too niche to be of value.

Its time now well and truly past, 3DVision will no longer be supported in the core GeForce driver stack after the final Release 418 update in April. Critical issues will be addressed (particularly security vulnerabilities in the driver) until April 2020, but that driver will otherwise remain untouched and available only for legacy support.

So, if you're one of the lucky few with a pair of 3DVision glasses and supporting screen, enjoy the experience while it lasts.