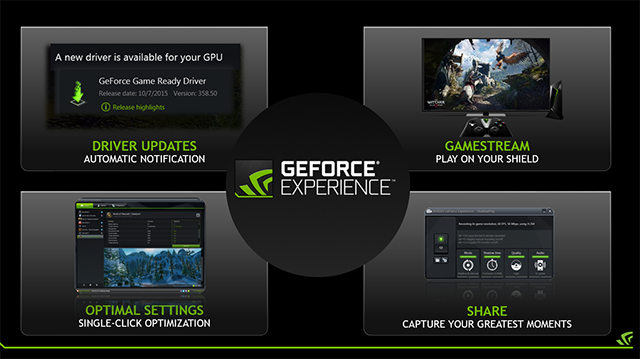 Launched in 2013 with only modest fanfare, NVIDIA's GeForce Experience has become critical to their GPU's complementary software suite, functionality, and adoption of SHIELD hardware devices. With a userbase upwards of 65m, thanks not least to NVIDIA's continued dominance of the desktop GPU market, GFE has become core to how gamers make the best use of their NVIDIA hardware in all the latest games.

GeForce Experience's core features for most users will be driver update notifications and one-click game optimisations, which have allowed NVIDIA to be supremely agile when it comes to releasing new 'Game Ready' drivers ahead of a major game launch. As a result users can be sure that they'll be getting the best possible experience, without relying on notification and suggestions from forums or news sites. However other features, most notably Shadowplay and GameStream, are also increasingly important due to the popularity of streaming and prominence of the standalone SHIELD hardware brand.

GeForce Experience Share, which entered beta last month, added an additional dimension to Shadowplay functionality. Through the use of a convenient overlay gameplay moments could be immediately shared with the world, either on stream or uploaded directly to Youtube. Basic video clip trimming tools were added to facilitate this, adding more flexibility whilst not side-lining the value of more powerful editing software. But perhaps the most innovative feature was quite literal gameplay sharing, making a game truly co-op by allow you to hand over the reins to a friend or simple running a 1:1 stream. 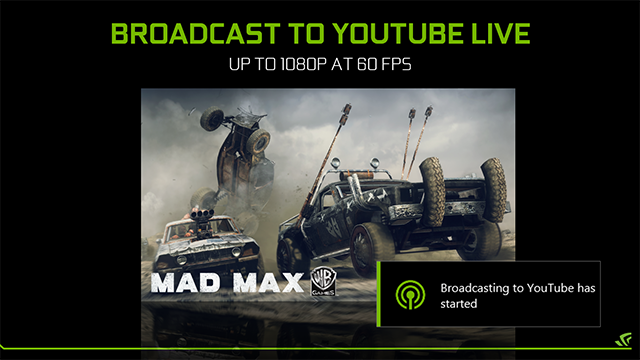 The GeForce Experience Share beta is still ongoing, but today NVIDIA are announcing a host of new baseline GeForce Experience tools, planned to roll out in the very near future. The update broadens both Shadowplay and Gamestream functionality in the main, but also expands on how users will be notified of new driver updates and game optimisation profiles.

Shadowplay allows you to make use of the on-board real-time h.264 encoder to record gameplay, or stream it to your own Twitch.TV channel. Whilst not as flexible and wide-ranging as XSplit or OBS, Shadowplay nonetheless has helped thousands get on board the streaming craze as well as record their own gameplay highlight packages thanks to how simple and easy it is to use.

One criticism of Shadowplay however has been the relatively sparse streaming options, most notably the lack of 1080p streaming. In today's update NVIDIA have announced that you're now able to stream in 1080p at 60fps, the highest quality setting Twitch currently allows. To ensure that image quality isn't adversely affected the maximum possible upstream bit rate has been increased from 5 Mbps to 9 Mbps, although you'll need a suitably meaty internet connection to support this quality setting.

Gameplay at 1080p60 is considerably smoother and more enjoyable than similar 30fps video, whilst increasing the resolution to 1080p will make broadcast images all the more smoother. If you're planning to use Shadowplay to stream any of the new games this Autumn you should certainly be taking note.

Part of the SHIELD complementary tools, GameStream allows you to stream your gameplay from your PC to a SHIELD device and play using peripherals connected to that device. With the advent of the SHIELD Android TV Console this month GameStream moves from a cool ancillary feature to one that is core to the way you can consume games, leveraging the power of your PC to play on a big-screen TV without dealing the hassle.

Due to the new hardware options available to them (esp. HDMI 2.0 output and Maxwell 2's more powerful NVENC) NVIDIA are now unlocking a 60fps GameStream option to the SHIELD Console at a full 4K resolution with 5.1 surround audio. Obviously you'll need a particularly powerful system to support rendering at these sorts of resolutions and frame rates, but it should also be noted that the bandwidth requirements are also enormous by comparison to 1080p60. Although specific figures haven't been provided NVIDIA recommends that 4K60 streaming is only performed over a cabled Ethernet connection.

GameStream at 4K resolution and 60fps will be possible with GPUs that support NVIDIA's 3rd Generation NVENC, i.e. 2nd generation Maxwell. In terms of SKUs this means that the 900-series and Titan X are the only ones capable of the feature; older 600 and 700-series cards will continue to operate at the previous limits.

As a final note, NVIDIA have also re-iterated their commitment to 'Game Ready' drivers for every new PC release of note as we move into the traditionally busy Autumn season. Triple-A titles - from Fallout 4 to the latest Assassins Creed - are set to come thick and fast over the next six weeks and NVIDIA have pledged that a driver update for each will be ready for all users of their hardware. 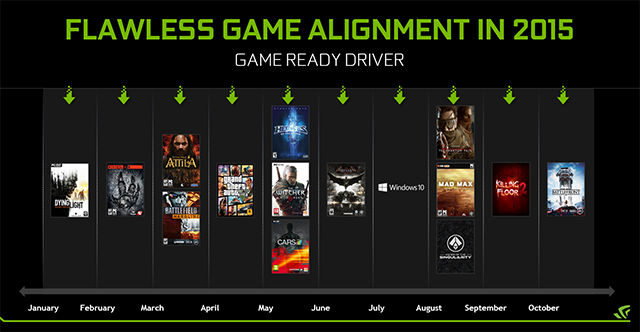 By doing this they hope to provide the best possible experience as soon as the game is installed, and it's particularly welcome given how notorious the launch window for Triple-A titles has become. Also aiding the experience are sets of GeForce Experience video setting optimisations, which are also downloadable prior to the game's release.

An Early Access beta for the update GeForce Experience app should be available later day, with a full launch occurring after and appropriate amount of testing. You'll be able to find it at http://www.geforce.com/geforce-experience/