NVIDIA Ushers In A New TITAN 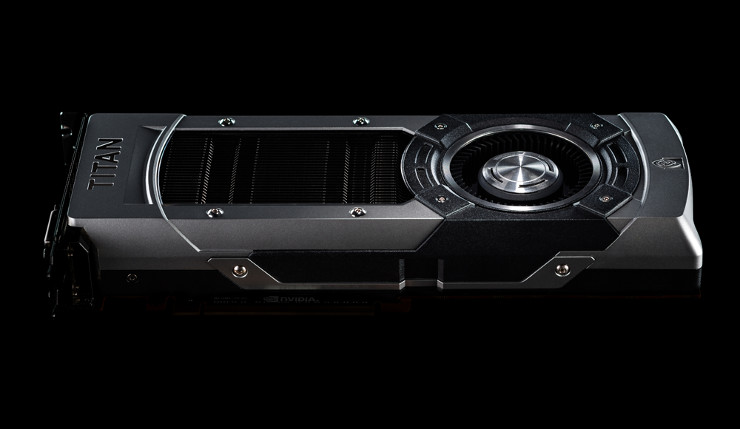 NVIDIA's TITAN GPU has for the last year held the position of flagship GPU in the GeForce range, although its position has become somewhat strained in the last few months. It was the first card to feature the GK110 GPU which had previously been the powerplant of the Tesla K20 and K40 range, each capable of fairly monstrous General Purpose GPU performance. Unlike the rest of the 700-series, including later GK110-based models, it was also capable of full double-precision floating point (FP64) performance - in other desktop Kepler cards FP64 was restricted to 1/24th of single-precision performance. It also includeded 6GB GDDR5 RAM as standard, rather than the 3GB maximum of the rest.

The GTX TITAN was therefore that rarest of beasts: a GFX card equally at home in both gaming and compute arenas.

Since then the TITAN's pure gaming performance has been exceeded by its less illustrious kin - firstly the heavily overclocked versions of the GTX 780, and then outright by the GTX 780 Ti. The latter boasted 2880 operational CUDA cores compared to the 2668 of the TITAN in additional to higher reference frequencies for the core, enough to push it to far greater frame rates. Arguably, on the release of the 780Ti the TITAN was no longer undisputed king. Today NVIDIA are rectifying that oversight.

Enter the GeForce GTX TITAN Black. Immediately succeeding the GTX TITAN on release, the TITAN Black utilises a fully unlocked GK110 at its heart operating at slightly higher base and boost frequencies than the reference GTX 780 Ti. Each is equipped with 6GB RAM clocked at 7000MHz GDDR5 through a 384-bit wide bus, and of course is compatible with DirectX 11.2 and OpenGL 4.4.

The cooling solutions will be familiar to many who have invested in recent NVIDIA reference designs. Constructed with aluminium shroud and including a backplate and very efficient blower design, it's been proved to keep the GK110 cool in an impressively quiet manner. If you were expecting an anodised black aluminium you may be a little disappointed, but it still very much looks the part.

More importantly the GTX TITAN Black has full double-precision processing support enabled. With this feature the TITAN Black is a far more viable prospect for heavy compute workloads compared to the GTX 780Ti, and the additional CUDA cores and memory bandwidth versus the original TITAN will make it the premier desktop card for appropriate workloads. Gaming performance should be very close to stock clocked GTX 780Ti, although the additional 3GB of RAM would serve it in good stead for the highest resolutions and image quality presets.

Unsurprisingly it's a pricey card too. Pegged at $999 (the same price point as the original TITAN) it's for those who need the best of the best and are unwilling to compromise. Pure gamers could still look to the less eye-watering GTX 780 Ti, but we know that there will be many who cannot resist the allure of this new flagship.

For more information on the GeForce GTX TITAN Black check out the official website. This may be the last hurrah for Kepler, or there may be something dual-GPU waiting in the wings, we'll have to wait and see.