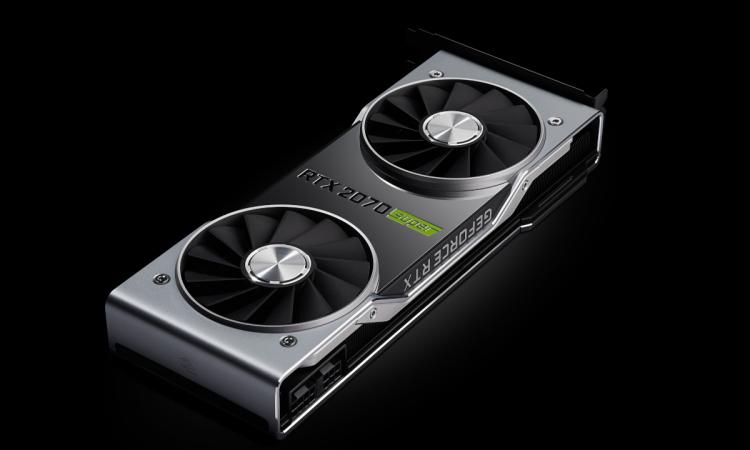 Gamescom 2019 is here and NVIDIA are marking the event with a major new driver update for their GeForce product line that rolls in new features alongside major performance optimisations. The GeForce Game Ready Driver 436.02, otherwise known as the Gamescom Game Ready Driver, begins by offering increased performance and a more optimal gaming experience for Apex Legends, Battlefield V, Forza Horizon 4, Strange Brigade, and World War Z, but builds on these foundations considerably.

NOTE: The current 436.02 installer package enforces the installation of GeForce Experience alongside the driver.

They say that good things come to those who wait and that's certainly the case with this driver. The last incremental release was almost a month ago, an extended barren patch that's quite out of character for NVIDIA's Game Ready team. Nonetheless performance improvements of up to 23% across a line of products, in this case the RTX 20-series, is an exceptional improvement that demands attention and more than makes up for any delay. 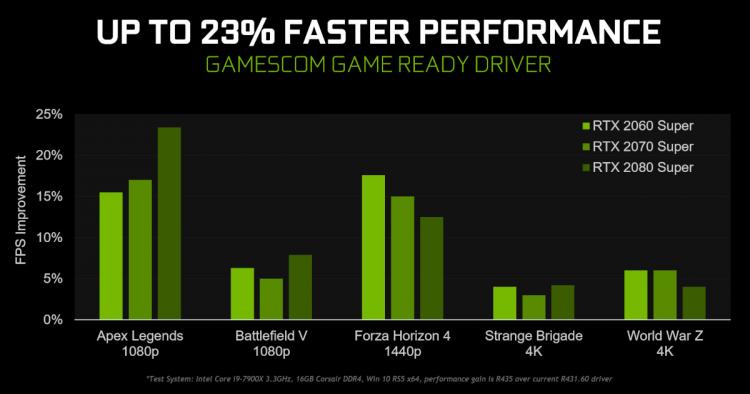 The headline figure of 23% is derived from Apex Legends (DirectX 11) improvements, but more modest (yet significant) fps increases are also present in DirectX12 and Vulkan rendered titles. Gains are seen across a variety of resolutions, APIs and and 20-series GPU segments, speaking to the comprehensive nature of changes made despite the games not being the most popular today. Other titles may also see knock-on improvements, although perhaps not to this extent. 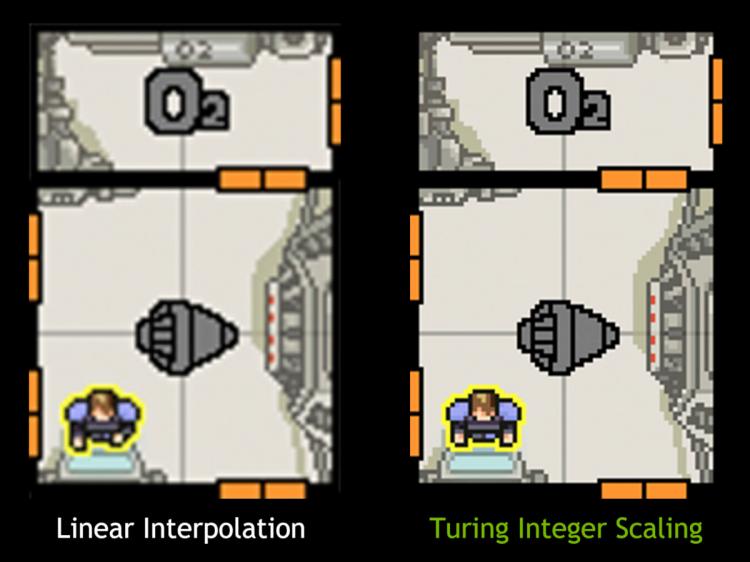 Integer scaling, aka nearest-neighbour interpolation, is an alternative to bilinear and bicubic interpolation techniques for scaling up rendered frames to monitor native resolutions. While it's a matter of personal preference, integer scaling is particularly useful for upscaling text, lines and pixel art from High Definition resolutions to 4K in a manner that preserves clarity.

Implementing Integer Scaling is a great addition in a world where retro and pixel-art styles games that render best in 1080p are played on 4K monitors. Classic 16-bit era games ported to Windows also benefit.

Third-party integer scaling has been available through software, but new hardware features on NVIDIA's Turing GPUs now make it viable natively. As a result this is a feature that isn't available to older NVIDIA GPUs.

NVIDIA's response to AMD's Low Latency mode is been implemented in this driver update. NVIDIA's prior low-latency mode reduced the frame render queue to reduce the 'mouse action to screen' time considerably, but the latest driver unlocks a zero-queue 'just in time' mode in an Ultra setting enabled on a per-game basis. This in turn can reduce latency by as much as 33%, as shown below: 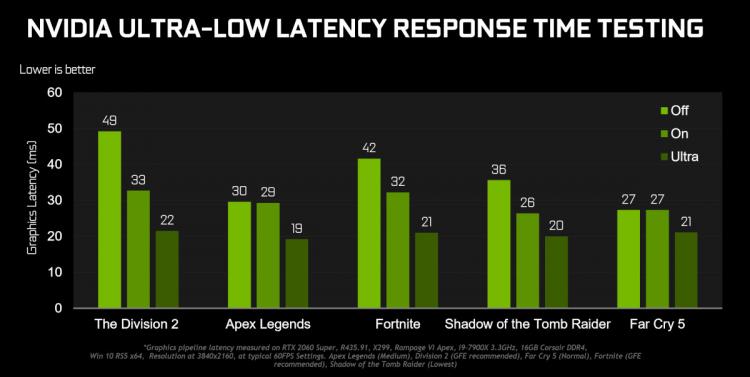 Beta support is offered in DX9 and DX11 games, while DX12 and Vulkan titles will be supported in a later revision.

The NVIDIA FreeStyle in-game overlay (part of the GeForce Experience desktop app) already offers a number of post-processing filters and joining them with the latest driver is a Freestyle Sharpen Filter. In contrast to other implementations it allows for a variable sharpness algorithm to be applied (selected through an in-UI slider), and it's supported by 600 games across various rendering APIs including DirectX 12 and Vulkan.

Three monitors are added to the NVIDIA G-SYNC Compatible list with these drivers: Acer's CP3271 and XB273K GP models, and the ASUS VG27A. These monitors support already Adaptive Sync, but the driver will now automatically detect them and enable adaptive-sync with monitor-specific optimisations if appropriate.

Curiously, finding information on these monitors specifically is difficult. The two Acer models show up on VESA's HDR panel certification list but aren't otherwise listed online (although a XB273K with native G-SYNC support does exist), while the ASUS VG27A was a 1080p screen from 2014 that doesn't match the specifications listed on NVIDIA's official compatibility list.

As usual, you can download the latest driver through the GeForce Experience app or directly from GeForce.com/drivers. GPUs as old as the 600-series are supported, but some features are exclusive to the latest generation of cards. Only 64-bit variants of Windows 10 and 7 operating systems are compatible with the consumer driver stack.

Beta features are available through the NVIDIA Control Panel toolbar utility in a somewhat ad-hoc implementation at this moment in time. The FreeStyle Sharpen Filter can be accessed in-game by pressing Alt+F3 and selecting 'Sharpen' from the overlay's drop-down menu.

A more comprehensive discussion of the new features present in this driver package is available here. Note that the initial 436.02 release required the installation of GeForce Experience alongside the driver. If the option to install the driver alone is selected GFE will still be installed, and 'Custom' options grey out the toggle that would disable installation of GFE. This was still the case at the time of publication.

- New control in the NVIDIA Control Panel->Display->Adjust desktop size and position page.
- Supported on NVIDIA Turing GPUs and later; Windows 10 April 2018 Update and later.
- Not recommended for use with HDR.

- Released as an update to NVCamera (for Freestyle and Ansel).