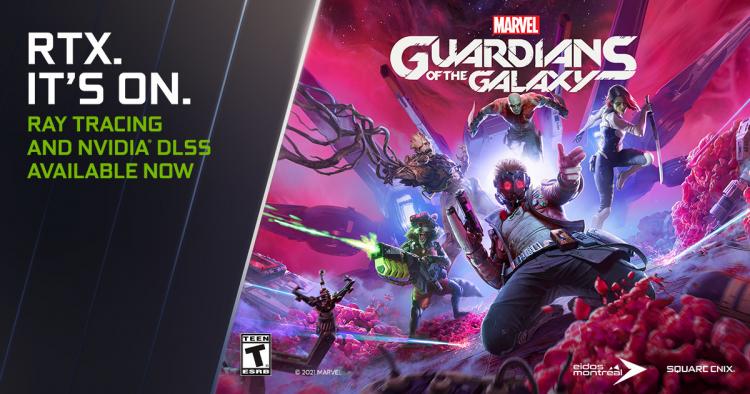 NVIDIA released their second driver update for October 2021 today and with it brought optimisations for a host of new and popular titles for gamers playing with GeForce hardware. The latest GeForce Game Ready Driver - version 496.49 for you counting at home - brings DLSS-based performance boosts to Marvel's Guardians of the Galaxy, support for the next iteration of Battlefield 2042's Beta testing phases, and even tweaks for Forza Horizon 5. Plus, still more is buried in the footnotes.

This week's big launch is without doubt Guardians, and with a GeForce RTX-class GPU you'll be able to enjoy AI-accelerated upscaling via DLSS. This settings mode will improve performance up to 2x over native rendering and help you push higher frame rates at your monitor's native resolution, which will be particularly handy if you're running a G-SYNC monitor. You'll of course also receive other day-1 driver-based fixes for the game, helping stability and thus improving the overall experience in what is shaping up to be an unexpected gem of a game.

Chivalry 2, Torn Banner's multiplayer hack'n'slash, is also getting the DLSS treatment from this driver update, coinciding with a content update that brings Halloween-based in-game events and a new brawl mode. This should improve performance by up to 45% and unlock 4K 60fps gaming from every RTX-series card (including the RTX 2060). Grand Theft Auto: The Trilogy  The Definitive Edition, a remaster of the classic 3rd person series, will similarly receive an overhaul that includes DLSS support, but this time at launch.

Other titles receiving some extra spit and polish are DOOM Eternal (improved DLSS implementation for the new 6.66 update) and Battlefield 2042. Plus, the driver will form the foundation for GeForce gameplay for Age of Empires IV, Call of Duty: Vanguard, Forza Horizon 5 and Jurassic World Evolution 2 when the launch in the coming weeks.

As part of the GeForce Experience app NVIDIA release a series of recommended in-game graphical settings for a wide selection of titles that can be automatically applied, tuned to your system's specificaitons. This driver adds six games to the hundreds that are already supported by this feature:

As well as new software, the GeForce Driver suite brings support for a handful of new G-SYNC displays entering the market or newly validated for certified compatibility. Monitors from ASUS, AOC and MSI have been brought into the fold, joining a long list of G-SYNC, G-SYNC Ultimate and G-SYNC Compatible hardware.

Finally, these drivers also incorporate a trio of fixes for identified issues as well as enumerating those set to be addressed in a coming update. Although relatively minor, these fixes will be relief for those minority of gamers struggling with them. Under the hood the driver also rectifies nine critical security issues recently identified and detailed in NVIDIA's October 2021 Security Bulletin, collectively categorised as High severity.

You can download the GeForce Game Ready Driver 496.49 WHQL from nvidia.com/en-gb/geforce/drivers/ or directly via the GeForce Experience app. The Drivers are compatible with 64-bit versions of Windows 10 and 11, and hardware as far back as the GTX 900-series (as well as selected Maxwell-based 700-series cards).

Game Ready for Marvels Guardians of the Galaxy

Security updates - see Security Bulletin: NVIDIA GPU Display Driver - October 2021, which is available on the release date of this driver and is listed on the NVIDIA Product Security page.

[YouTube]: Video playback stutters while scrolling down the YouTube page. [3129705]
Sonic & All-Stars Racing Transformed may crash on courses where players drive through water. [3338967]
[HDR][G-Sync]: Mouse pointer gets stuck after turning on HDR from the Windows Control
Panel or after toggling G-Sync from the NVIDIA control panel. [200762998]
- To work around, click the mouse (right or left button). The mouse cursor will be sluggish for a few seconds before returning to normal operation.

[NVIDIA Control Panel]: After setting the display multiplexer type to dGPU, the setting is not preserved across a reboot or resume from S4. [200779758]