AMD's Next-Gen Radeon RX 480 was released this week, and naturally NVIDIA were sure to return fire in the mid-range price/perf bracket sooner rather than later. Earlier indications pointed to an August debut for a brand new mid-range GPU but now an announcement on July 7th seems to be on the cards, and alongside this timeline we now have rumoured specifications for a putative GeForce GTX 1060.

These rumoured specs arrive as they so often do from VideoCardz.com and are based on leaked press slides. We should stress that at this time we cannot confirm the authenticity of those slides, so take everything you read with a hefty pinch of salt.

By all accounts the GTX 1060 is based on the GP106, a new GPU built with NVIDIA's Pascal architecture that's smaller and less powerful than the GP104 of the GTX 1080/1070. As a result it will have fewer CUDA cores (1280, compared to 2560 on the full-fat 1080) and an abbreviated 192bit wide memory bus with 6GB GDDR5 VRAM, but should still be price/performance contender thanks to clocking up to 1700MHz. 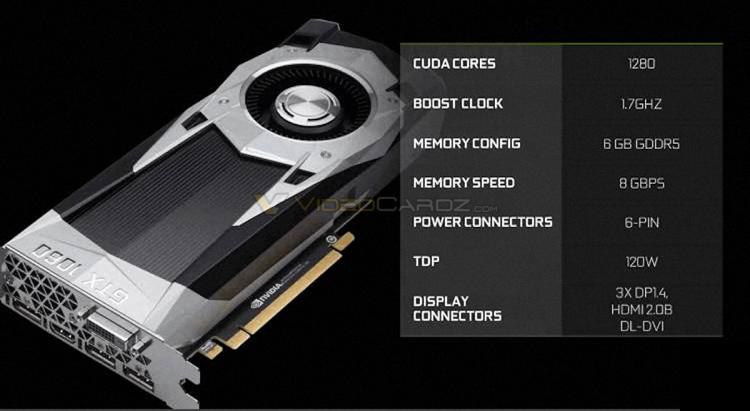 Information teased by Inno3D also indicates that the GTX 1060 will replace both the GTX 970 and 980 in NVIDIA's product stack, likely offering performance on par with the GTX 980 but in a more power-efficient package. Virtual Reality performance in particular should see a major boost even over the worthy GTX 980 thanks to improvements made in Pascal's design, and of course the GTX 1060 will have many of the same features such as NVIDIA Ansel etc.

The GTX 1060 will go head-to-head with AMD's new Radeon RX 480 in the next-gen GPU shootout, but launch reviews of the RX 480 indicate that AMD's offering may struggle to meet both the performance and power efficiency of the GTX 1060. Equally, the GTX 1060 claims are suspect due to both the leaks timing (when it's most damaging to AMD) and the slide authors being NVIDIA's marketing dept. Factoring in performance, price will be key; unsurprisingly price is the most critical metric which hasn't been leaked.

The leaked slides are also in agreement with the design of the Founder's Edition-style blower cooler from the Hong Kong leak earlier this week.

Even if this rumour turns out to be a dud it's worth considering that large reductions have been placed on NVIDIA's GTX 970 at retail, and AMD's RX 480 also appears to offer great value. Given NVIDIA's typical pricing scheme for new releases (price according to perf. versus previous gen. rather against than the competition) either the 970 or RX 480 are still excellent options you can pick up today.