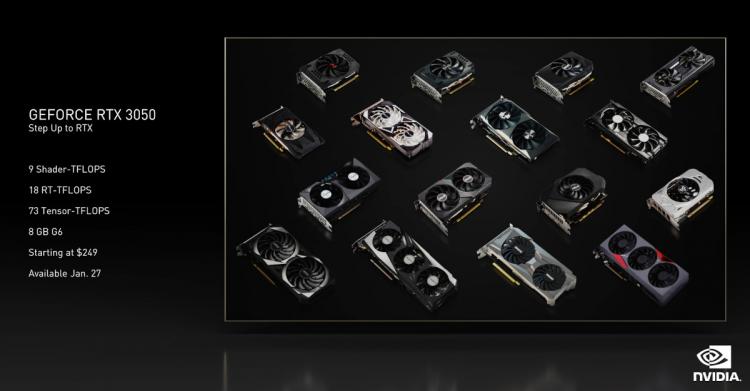 NVIDIA's GeForce RTX 3050, the newest mainstream RTX-class GPU from the green team, finally appeared on shelves today following its launch at CES 2022 and media reviews earlier this week. The lucky few will already have picked up a GPU at the MSRP of $249/£249, but to use it effectively they'll need a driver for that card. Enter, the Gamer Ready 511.32 - WHQL Driver.

Much like the GeForce RTX 3080 12GB, the RTX 3050 is launching with a driver specifically tailored to the card that doesn't list support for any other member of the RTX 30-series. This, in theory, ensures exemplary optimisation for the GPU on the day it launches, rather than getting bogged down in also ensuring the driver passes qualification tests for all cards with flying colours.

As a result you'll only want to download and install the 511.32 driver if you own one of the new RTX 3050's. A fresh unified driver supporting all members of the RTX 30-series series (old and new) should be available in the very near future.

The Gamer Ready 511.32 - WHQL Driver is compatible with 64-bit versions of Windows 10 and 11, and is available both through the GeForce Experience desktop app or via geforce.com/drivers.

Includes support for the GeForce RTX 3050.

As with every released driver, version 511.32 WHQL of the Release 510 driver has open issues and enhancement requests associated with it. This section includes lists of issues that are either not fixed or not implemented in this version. Some problems listed may not have been thoroughly investigated and, in fact, may not be NVIDIA issues. Others may have workaround solutions.

[Windows11][Far Cry 6]: Geometric corruption occurs in the benchmark and in gameplay. [3441540]
[NVIDIA Ampere GPU]: With the GPU connected to an HDMI 2.1 audio/video receiver, audio may drop out when playing back Dolby Atmos. [3345965]
[Deathloop][HDR]: TDR/corruption occurs in the game with Windows HDR enabled. [200767905]
- If this issue occurs, toggle the Windows HDR setting.
Sonic & All-Stars Racing Transformed may crash on courses where players drive through water. [3338967]
[NVIDIA Advanced Optimus][NVIDIA Control Panel]: After setting the display multiplexer type to dGPU, the setting is not preserved across a reboot or resume from S4. [200779758]
[NVIDIA Image Scaling][Desktop]: The screen moves to the upper left corner on cold boot when Image Scaling is applied to the desktop. [3424721]
- Do not apply NVIDIA Image Scaling to the desktop. It is intended only for video upscaling or for games which do not run with a scaling resolution unless the same Image Scaling resolution is applied on the desktop.
[NVIDIA Image Scaling][DirectX 11 video apps]: With Image Scaling enabled, video playback is corrupted or results in a system hang after performing an HDR transition. [3431284]
If HDR is required to be toggled from the Microsoft Control Panel, be sure to switch to a different Image Scaling resolution.