We achieved another record quarter, capping an excellent year, said Jensen Huang, founder and chief executive officer of NVIDIA. In a powerful sign of our progress, attendees at NVIDIAs GPU Technology Conferences reached 22,000, up tenfold in five years, as software developers working in AI, self-driving cars, and a broad range of other fields continued to discover the acceleration and money-saving benefits of our GPU computing platform.

Industries around the world are racing to incorporate AI. Virtually every internet and cloud service provider has embraced our Volta GPUs. Hundreds of transportation companies are using our NVIDIA DRIVE platform. From manufacturing and healthcare to smart cities, innovators are using our platform to invent the future, he said.

During fiscal 2018, NVIDIA returned $1.25 billion to shareholders through a combination of $909 million in share repurchases and $341 million in quarterly cash dividends. 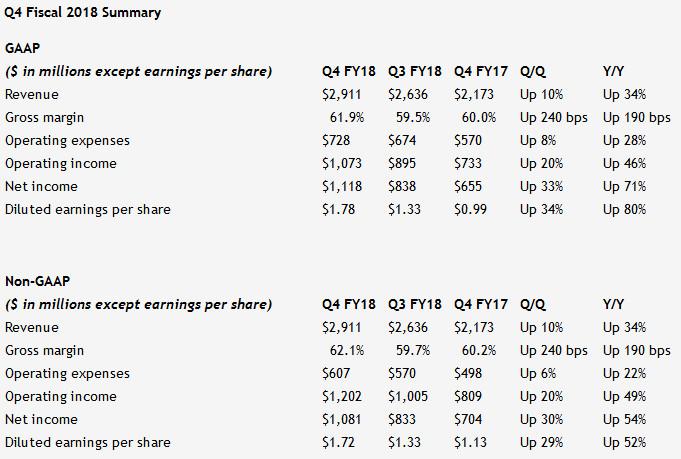 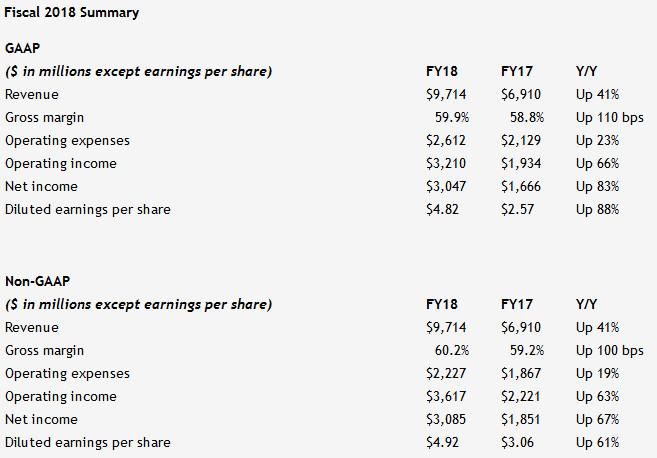 NVIDIAs outlook for the first quarter of fiscal 2019 is as follows:

- Revenue is expected to be $2.90 billion, plus or minus two percent.

- GAAP and non-GAAP gross margins are expected to be 62.7 percent and 63.0 percent, respectively, plus or minus 50 basis points.

- GAAP and non-GAAP operating expenses are expected to be approximately $770 million and $645 million, respectively.

- GAAP and non-GAAP other income and expense are both expected to be nominal.

- GAAP and non-GAAP tax rates are both expected to be 12 percent, plus or minus one percent, excluding any discrete items. GAAP discrete items include excess tax benefits or deficiencies related to stock-based compensation, which the company expects to generate variability on a quarter by quarter basis.

During the fourth quarter, NVIDIA achieved progress in these areas:

- Announced that NVIDIA Tesla® V100 GPU accelerators are now available through every major computer maker and have been chosen by every major cloud to deliver AI and high performance computing.
- Added a record 34 GPU-accelerated systems to the Top500 supercomputer list, bringing the companys total to 87.
- Announced partnerships to further AI in key vertical industries, including initiatives with GE Health and Nuance in medical imaging; Baker Hughes, a GE company, in oil and gas; and Japans Komatsu in construction and mining.
- Expanded the NVIDIA® GPU Cloud container registry to support scientists using HPC applications, and AI researchers using desktop GPUs.