Launched in 2015, NVIDIA's SHIELD TV saw an immediate positive reception as a highly capable home streaming media player, thanks in no small part to its hardware backbone of their Tegra X1 SoC. Perhaps most importantly however the system has enjoyed continued support with ample software updates, exemplified earlier this year as a premier Android TV device for burgeoning 4K and HDR video. Now NVIDIA are making the SHIELD TV just a touch more tempting for those who will take advantage of it solely as a media streaming device - removing the bundled controller, but offering the package for less.

Today, NVIDIA are offer pre-orders of the SHIELD TV without remote for £179.99, available direct from NVIDIA and selected Curry PC World stores. The hardware inside remains the same - Tegra X1 matched with 16GB on-board storage - while the bundled remote provides simple and straightforward navigation and voice control. App support is comprehensive: a plethora of subscription 4K options including Netflix and Amazon Prime are backed up by native Youtube 4K playback, where competitors often restrict one or more of these services to 1080p (if they're supported at all).

As a member of the Android TV ecosystem, SHIELD TV supports the full range of applications developed for the platform.

Chili Cinema is a new on-demand video service, offering users the chance to watch new releases just weeks after their cinema release, as well as a range of TV shows and other content. No subscription is required - you pay for what you watch, and no more. In the near future Chili Cinema will also offer cinema tickets, as well as the rights to stream films which you bought tickets to in perpetuity. 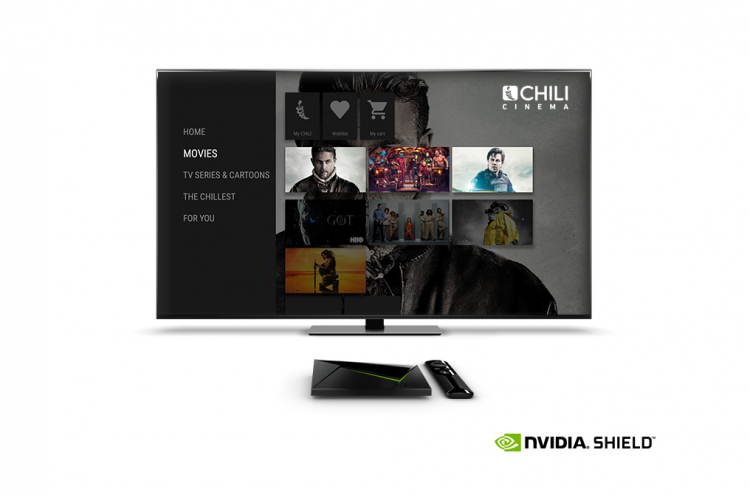 Youtube Kids meanwhile is a portal to family-friendly Youtube content "designed for curious little minds" through the SHIELD TV. Featuring a wealth of curated channels and content, it also supports robust parental controls for additional peace-of-mind.

Anyone looking to buy an NVIDIA SHIELD TV for its gaming capabilities also need not fret. The current NVIDIA SHIELD TV 16GB and SHIELD TV PRO 500GB options, including a bundled controller, will continue to be offered for the foreseeable future.


For more information on the SHIELD TV visit NVIDIA.co.uk.

There are currently 483 user(s) online:
Google