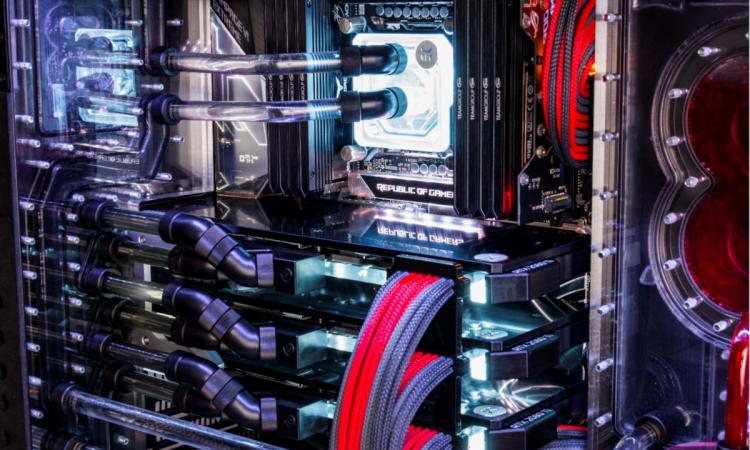 They say insanity is doing the same thing twice and expecting a different result, but after much consideration we'd beg the OED to add a second definition: an 8PACK Custom PC from Overclockers UK, filled to the brim with insane hardware, design flair and raw performance potential. Today a new critical patient has been admitted to the ward - the Orion X2.

Ian "8PACK" Parry has been creating revolutionary systems for at least a decade, bringing to bear expert knowledge of system design, extreme overclocking and cooling. This expertise comes together in a range of cutting edge PCs that not only push the boundaries of performance, but also have a unique aesthetic that's seen them showcased at trade-shows all over the Globe. The latest make use of premium custom water-cooling, rigid tubing and lighting throughout, resulting in systems which deserve to be given pride of place rather than hidden away in a bedroom's darkest corner.

For the Orion X2 8PACK worked with Intel, NVIDIA and ASUS ROG in bringing together not one but two systems into one generously-sized Phanteks enclosure. Incorporating both an EATX and mini-ITX system with eye-popping potential, the dual-system PC is both water-cooled and kitted out with awe-inspiring components. But it's not for the faint of heart, nor light of wallet; this premium PC will set you back £32,999.

The Systems - Dual, not Duelling

The Orion X2 is comprised of two distinct PCs within one bespoke chassis: a primary workstation with HEDT components, and a secondary system a little more modestly equipped that's ideal for gaming. Clearly users able to make optimum use of both will be rare, but those who do will immediately be salivating. So, what goes into them?

Overclockers UK describe the Orion X2's primary system as a 'no-compromise workhorse', and that's an apt description. Each eighteen-core Intel i9-7890XE processor is hand-picked by 8PACK for its overclocking headroom, reaching a minimum of 4.6GHz in the flagship ASUS ROG Rampage Omega X299 motherboard. Complementing the CPU is 128GB of "8PACK Edition" TeamGroup 3200MHz DDR4 RAM, designed with input from 8PACK himself featuring custom heatsinks and Samsung B die chips. This all comes together in a package that emphasises stability as well as performance, making it truly of workstation calibre. 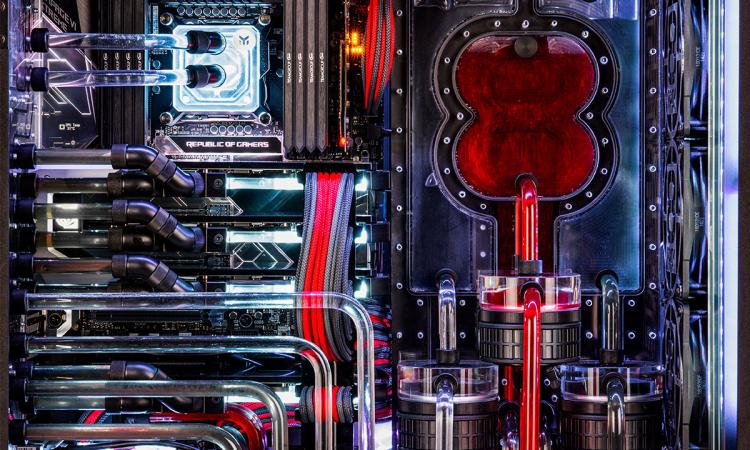 Of course, no PC is complete without a graphics card, and 8PACK has chosen the cream of the crop. The Orion X2's primary is equipped with not one but two state-of-the-art NVIDIA RTX TITAN 24GB graphics cards, connected via NV-Link and water cooled for optimum performance without unsightly air cooling. This should be enough horsepower for the vast majority of workloads, but if still more is required then a third NVIDIA RTX TITAN may also be optionally installed.

There's plenty to be impressed by in the Orion X2's secondary system, to the extend that 'secondary' seems like almost a misnomer. As you might expect, any gamer would be exceptionally happy with its specifications and it should tear through even the most demanding games with aplomb.

On the mITX ASUS ROG Strix 390I motherboard is mounted an 8-core, 8-thread Intel i7-9700K binned for overclocking to a minimum of 5.1GHz. Graphics crunching is taken care of by an NVIDIA RTX TITAN running solo, water-cooled and overclocked. In terms of memory, 16GB of 8Pack Edition 4000MHz DDR4 RAM by TeamGroup hits a sweet spot, and two 2TB Samsung 970 EVO SSDs offer cutting-edge storage performance for gaming. 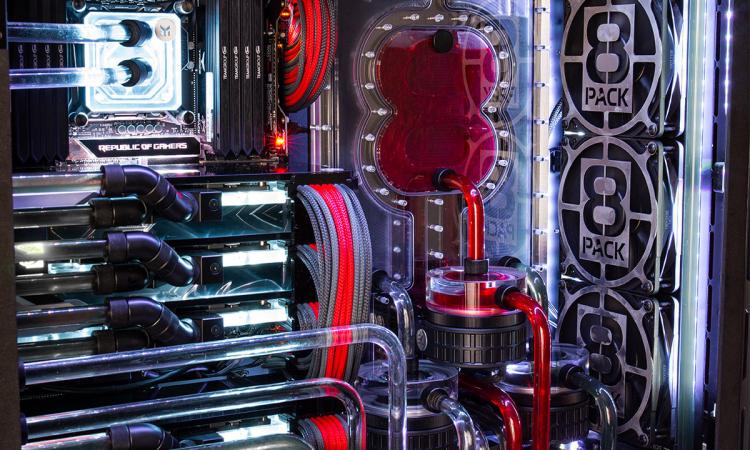 If there's a running theme here, it's that the system is highly optimised for gaming performance in a manner that isn't compromised by its compact size. Benchmarks will no doubt be beyond excellent, but plenty of care has been made to select and configure components for day-to-day running.

Phanteks Elite Full-tower Chassis was chosen as the canvas on which 8PACK would paint his latest masterpiece, but customisation was required for even this exceptionally well appointed premium PC case. Some is obvious at a glance - custom lighting particularly makes the system pop like few others - but more extreme modifications would always be necessary to accommodate two systems and three watercooling loops.

When utilising industry leading hardware, combined with a world-class overclock, you require a cooling configuration far above and beyond the capabilities of any off-the-shelf solution. The Orion X2 has the most complex and efficient custom watercooling system we've ever created including: 4 EK reservoirs, 3 additional acrylic reservoirs, 4 custom acrylic pass-through plates, 3 pumps, 5 metres of hard-piping and over 8 litres of coolant.

These come together to form three water-cooling loops that can be recognised by their grey, silver and red Mayhem fluid. The liquid coolants are distributed throughout the dual system setup via a series of custom acrylic pass through plates. These are designed not only to reduce visible hard-tubing, but allow integration of branded acrylic reservoirs located to the right of the motherboard. They increase coolant capacity and provide an impressive visual testament to the engineering feats required to build the Orion X2.

The triple reservoir is designed in the shape of the 8Pack logo, with each of the coolants cascading down to their individual EK rev pumps, located just below. All three water-cooling loops are managed by their own dedicated Aquaero 6. This controls flow rate of each loop as well as highlighting important information such as system temperature via an LCD screen.

The Orion X2 houses a total of 4 radiators to cool it's dual system set-up, the first of which is a top mounted 480mm radiator, located just behind the signed and numbered 8Pack Edition plaque. This 480mm radiator is dedicated to cooling it's overclocked intel I9-9780XE.

Underneath the primary compartment of the Phanteks Enthoo Elite, you'll find two additional radiators that support the secondary gaming system. This loop comprises of a 480mm radiator which cools the overclocked I7-9700K and an additional 360mm radiator for the dedicated TITAN RTX graphics card. These feed back up into the custom acrylic pass through plates, around the water-cooling loop and finally back into the 8Pack branded acrylic reservoir. 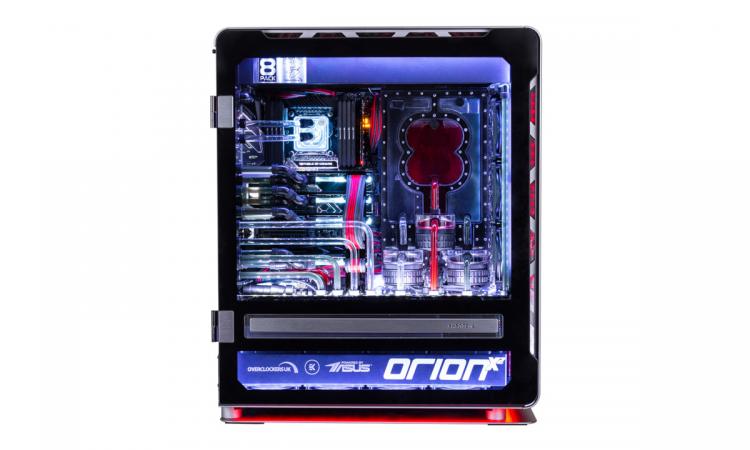 As you can see, 8PACK and Overclockers UK have painstakingly assembled a system that perfectly brings together performance and aesthetics though well-chosen components and skillfully laid out watercooling. Not only is the Orion X2 crafted to optimise cooling, it does so in a way that hides that most unsightly of components: the PSU. Hidden in the lower compartment is a specially designed 2000W 80Plus Platinum 8Pack Edition by Super Flower Leadex, configured to power both Primary and Secondary systems in tandem.

Last but not least, 200m of meticulously crafted braided PEXON cables are used throughout. It takes 40 hours for the OCUK assembly team to sleeve each individual cable, but the end result is more than worth it.