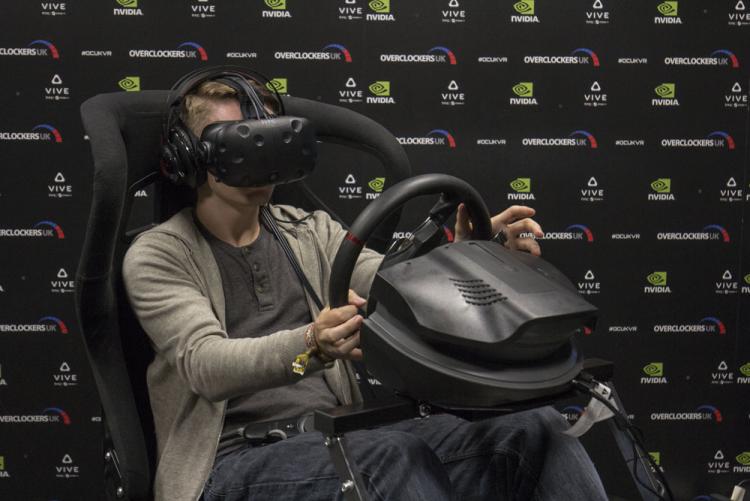 Pioneering the world's most powerful gaming PCs and pushing the boundaries of unstoppable performance, The Overclockers UK Racing Series is the first Virtual Reality competition which climaxes with a real life, high-speed driving experience at the Bedford Autodrome Circuit. Strap your seatbelts as participants rev their engines, shift their gears and put their racing skills to the test while immersed in the virtual environment like never before.

This all-new year-long event will introduce people to the best of what virtual reality has to offer. The first set of qualifying rounds will be held at Overclockers UK HQ in our dedicated and purpose-built VR room throughout the duration of the year.

Participants who advance to the next rounds are in for a real treat! Not only will the event take place in virtual reality, winners of the first qualifying rounds will be provided with the opportunity to experience the drive of a lifetime in fast sports cars around Bedford Autodrome Circuit!

Partnered with Intel and XFX, and taking advantage of the best in-class VR headsets, Overclockers UK will be utilizing the experience of the HTC Vive  powered by the highest performing gaming PCs on the planet! Along with motion-based platforms that reflect every skid, crash, swerve and drift  the lines between real-world motorsports and virtual racing will forever be blurred, leaving pixels in the dust!

Simulation-based physics, an authentic handling model, tweakable parameters correlating to the vehicle transmission, tyre pressure and aerodynamics  developed by Slightly Mad Studios and highly praised as 2015's No.1 motorsports simulator  Project Cars is the only game that's able to provide the necessary level of graphical detail and highly-defined realism that's capable of delivering such an intense experience within the virtual world.

Racing off the sidelines and taking it to the tarmac, those who prove themselves within the simulated environment will be provided with an adrenaline-fuelled experience, where they will compete at the world's greatest driving event. Combined with 25 years of evolution and engineering excellence PalmerSport will be providing all competitors with the opportunity to drive the The JP L-M, Formula 3000, Caterham pursuit, BMW M4, and the ultimate innovation in driving excellence  the Ariel Atom.

Making it's way to the track on the 3rd of December, those who deem themselves worthy of the clutch and wish to prove their skills for the starting season  qualifying rounds will be held at the Overclockers UK VR Showroom. While the day will open to everyone of all ages to race and compete  proving who's the leader of the pack, leaving their friends in the dust as they retire to the pits  restrictions do apply for those who are looking to enter the competition.

Cars require fuel and so do our racers. Treating our entrants to the same hospitality that all professional racers are accustomed to, Overclockers UK will be providing a full catering service to all competitors that make it to the advanced qualifying rounds for each event that takes place at Bedford Autodrome.

Ready to put the pedal to the metal? Or will you be watching from the sidelines? Competition entry is completely free!

So fasten your seatbelts and start your engines!