Los Angeles-based NZXT are well known for their extensive range of PC chassis and cooling products, having wowed many a reviewer and gamer alike with their innovative take on what was once a stale market. However simply being a heavy-weight in this category doesn't seem to be enough any more, and so they're branching way outside of their comfort zone to bring something they believe to be an awesome tool to enhance gaming. It's called the DOKO, and it's an interesting piece of kit.

Some time in 2013 game streaming really hit the collective gamer consciousness. This was not just Twitch streaming, although that has certainly taken the bulk of attention, but also the relatively straight-forward capability of streaming to your living room from a high-end PC elsewhere in the home. Unfortunately whilst that proved to be straight-forward from a conceptional standpoint putting it into practice hasn't been a speedy endeavor exactly, nor one without associated issues.

Take SteamOS for instance - excellent design and backed by a huge developer. However it currently requires that you build a new system of moderate specification to sit next to your TV. NVIDIA Shield by contrast is a slightly more affordable option, but locks you in to NVIDIA graphics hardware from the outset. Other technologies face their own problems, whether it be latency or other forms of proprietary hardware and software. There's obviously room in the market to shake things up, and NZXT aim to do just that.

The DOKO is entirely new. It operates as a low-profile set-top box that has data streamed to it via gigabit LAN, rendering that data as 1080p 30fps video output to a TV via HDMI. So far, so straight-forward. However to play your games through this device there needs to be some form of bidirectional communication, which the DOKO achieves through the use of four USBoverIP-enabled USB ports. From these ports and connected peripherals you will be able to control your PC in the comfort of your living-room, whether that be to watch web-exclusive content or play the latest games. Not bad.

To connect to the DOKO a PC needs to have NZXT's software installed, but once set up it will be able to stream and game or web-service regardless of platform. That means you can play games from Origin, Steam, UPlay or any other service and have no compatibility issues, unlike some other solutions. NZXT claim the DOKO suffers from a latency of only 50-80ms, and that's going to be crucial to its strength as a game streaming device. Perceptible input lag is fine for web and other non-interactive content, but kills the experience in even the most mundane and sedate of titles. 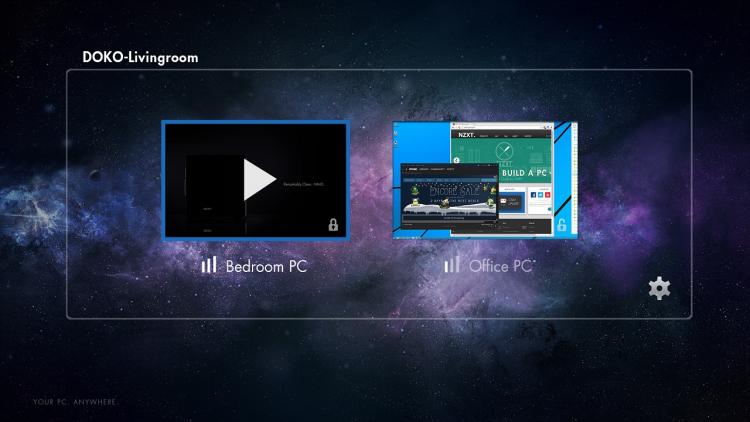 Of course, there are some weaknesses the DOKO will need to make up for, the most pressing perhaps being the necessity of a wired LAN connection. Specifics on the bandwidth required aren't available but their likely to be hefty, so you'll want to ensure that your network keeps traffic to a minimum when gaming. Latency concerns will also probably mean that wirelessly connected PC's aren't particularly suitable. But still, the capabilities should be more than enough to whet your appetite.

The DOKO is set to be available from NZXT's Armory online store for $99.99, with international distribution to be announced at a later date. For more information visit NZXT's dedicated micro-site at DOKO.NZXT.com