Piledriver Cores to give 10% extra performance

2nd generation Bulldozer core, codenamed 'Piledriver' is expected to provide 10% better x86 performance over the yet to be released Zambezi CPUs, that is the FX-Series CPUs. There are new instruction sets, including FMA3 and will support native 1866MHz DDR3 ram. Interestingly the diagram says 'memory controller > 4 DDR3 DIMMS', could this be a clue to quad channel memory? Or just wishful thinking? 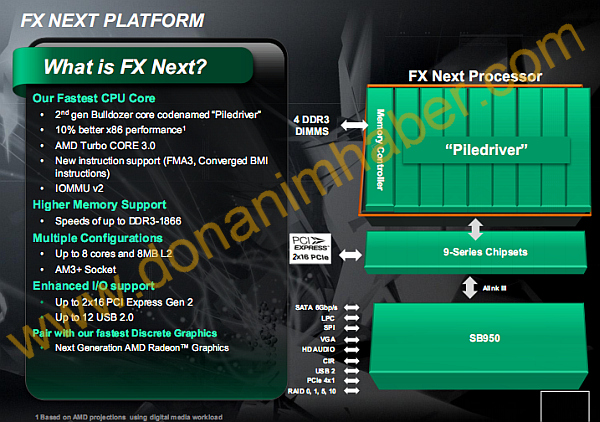 The Piledriver cores are stated to be paired with the SB950 of the 900 series chipset motherboards as well as the AM3+ socket, so it would appear that AMD plan on an AM3+ refresh. Currently it is expected that the refresh will happen late 2012.

Unfortunately there still appears to be no mention of PCI-E gen 3.0 for the AMD platform.

There are currently 611 user(s) online:
Google