We are excited to announce the new M6 series, Plextors new generation of consumer solid-state storage products. With the addition of the M6e M.2 PCI-e and SATA drives to the M6 family, Plextor now offers one of the broadest and highest-performing portfolios in the consumer space, said Darlo Perez, managing director of Plextor Americas.

In addition to the new M.2 form factor, the M6 also features the latest generation of advanced 19nm Toggle NAND flash from Toshiba, with &#147;Adaptive Write Plextors next-generation proprietary firmware technology designed to maintain SSD performance under heavy workloads throughout the life warranty of the drive. This allows for increased storage density and capacities up to 512GB.

M6e M.2 PCI-e and HHHL PCI-e Card: This solution is optimized for serious users who demand the fastest speeds seen on the market today. The M6e sports the latest generation Marvell® 88SS9183 flash controller with multiple cores for efficient performance during intense usage. The M6es PCI express interface delivers maximum sequential read/write speeds of up to 770/625 MB per second and random read/write speeds of up to 105,000 and 100,000 IOPS. The M6e is automatically recognized as an advanced host controller interface (AHCI) device, requiring no additional drivers. When used as an ultra-fast boot disk on a system with unified extensible firmware interface (UEFI), startup times are cut in half. The M6e comes in capacities up to 512GB. 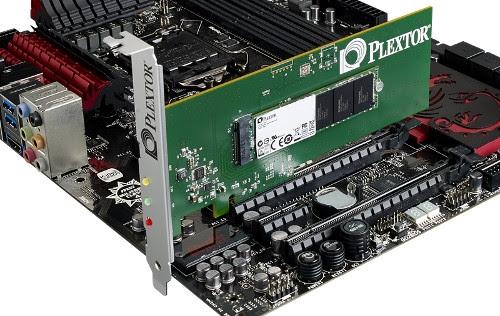 The entire M6e series is backed by a five-year warranty and the reassurance of Plextors long reputation for quality, testing, and rock-solid reliability. All Plextor products feature exclusive custom in-house design and development by Plextor hardware and firmware engineers.

M6S: A high-performance hard drive upgrade, the M6S 2.5-inch SATA SSD is the perfect replacement for any traditional hard drive. It features faster boot times, shorter application load times, and overall improved system performance. The M6S is available with up to 512GB of storage, and features sequential read/write speeds of up to 520MB/440MB per second and random read/write speeds up to 94,000 and 80,000 IOPS, respectively.

The M6 series is scheduled to be available for purchase in the spring of 2014.

For more information about Plextor products, go to: www.goplextor.com.

Plextor is a world-leading developer of solid-state drives, Blu-ray optical disc drives, and other high- performance digital storage devices for professionals, consumers, and enterprises. Since the company launched its first CD-ROM drive in 1989, Plextor's prestigious multiaward-winning products have set the standard for quality and high performance. Plextor will continue to deliver new generations of products based on our core values of market-leading innovation, unequalled quality, complete service, and our belief that users should have full confidence in the performance and stability of the equipment we supply. The Plextor brand of storage and multimedia products is owned by Shinano Kenshi of Japan.