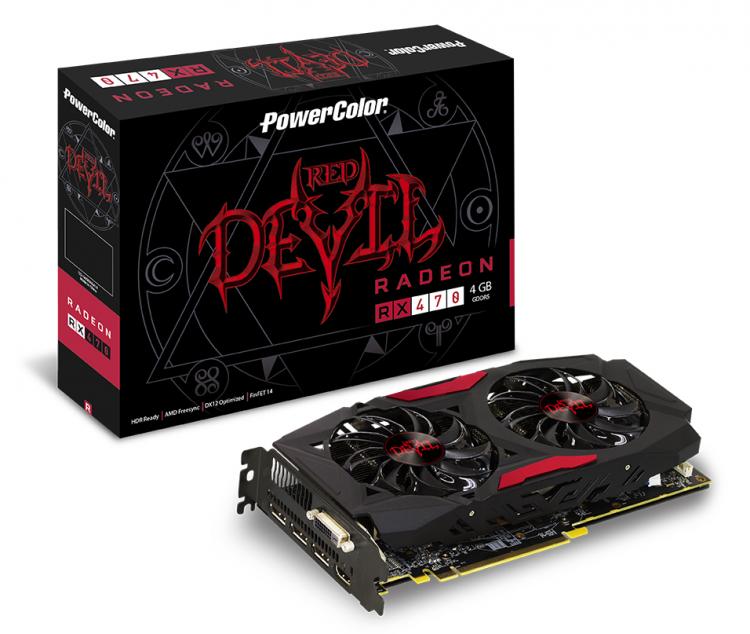 It looks like a new devil has come to AMDs lineup in the form of the Powercolor Red Devil RX 470. Unlike previous generations of AMD cards, Powercolor has taken its Devil line to the mid range.

The Powercolor Red Devil RX 470 is a factory overclocked beast of a card utilizing the full potential of the RX 470. Obviously, it is still constrained to the RX 470s 32CUs, but it offers a solid boost clock of 1270MHz and a bump in the memory clock to 7.0Gbps. It also currently only comes in a 4GB variant. The Red Devil is designed to push those clocks further with an 8 pin PCIE power connector and 6+1 multi-phases. For even easier overclocking, the Red Devil RX 470 comes with an overclocking mode BIOS switch.

On the design side, the RX 470 Devil is very similar to the RX 480 version. It features the Double Blade III cooler with dual 80mm fans. Under the plastic shell, the heatsink has a multi-pipe nickel-plated copper design. Unlike some other AIB cards, the Devil is fairly low tech. Powercolor is banking on its standard Devil aesthetic, rather than building in some of the software controlled LED features of other cards. As with many other AIB cards, the Red Devil does come with a backplate for increased rigidity and heat dissipation. Its nice to see manufacturers putting backplates on mid range cards, and it shows that mid range doesnt mean cheap or underwhelming.

The Powercolor Red Devil RX 470 also offers a nice range of monitor ports to support many configurations. The Red Devil has 4 Display Ports, a single HDMI, and one DVI-D.

The Red Devil is now currently available along with other RX 470 models. It retails for an entirely reasonable $179.99US. UK pricing isnt confirmed just yet.