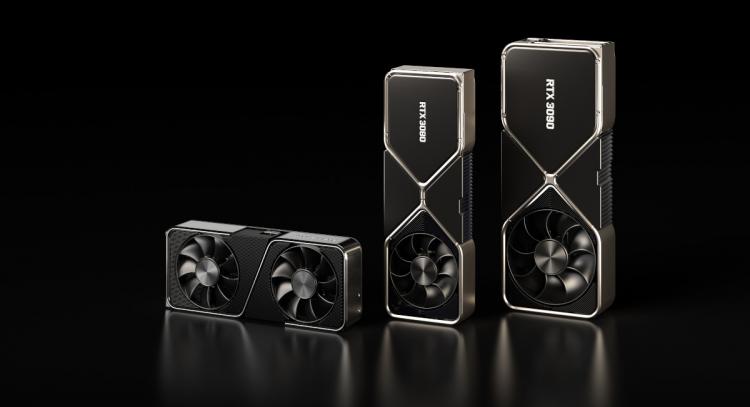 After rumours, leaks and months of waiting, NVIDIA have finally taken the wraps off their consumer edition graphics cards based on the Ampere microarchitecture. The GeForce RTX 30-series boasts major advancements in ray-tracing and AI processing, benefits to rasterisation rendering, and a reference cooler design that is significantly more efficient than previous iterations. Starting at $499 for the RTX 3070, and launching with the RTX 3080 in just a couple of weeks, it may be just what the last of the Pascal hold-outs need to justify transitioning to RTX.

NVIDIA's Ampere is their 2nd generation RTX architecture, and incorporates major changes to the hardware stack. It's manufactured on Samsung's 8nm process, a true lithographic generational step forward, avoiding the backlogs at TSMC to push more chips to the market. By transitioning away from 12nm (which was based on the earlier 16nm lithography) and more revisions under the hood they've unlocked a 1.9x perf/watt improvement compared to Turing.

Although not confirmed, the largest Ampere is believed to be codenamed the GA102, and differs considerable from the compute-oriented GA100. This 28bn transistor monster is smaller but more complex than the 18bn transistor TU102 found within each RTX 2080 Ti by virtue of Samsung's 8nm node, leading to impressive on-paper performance gains. 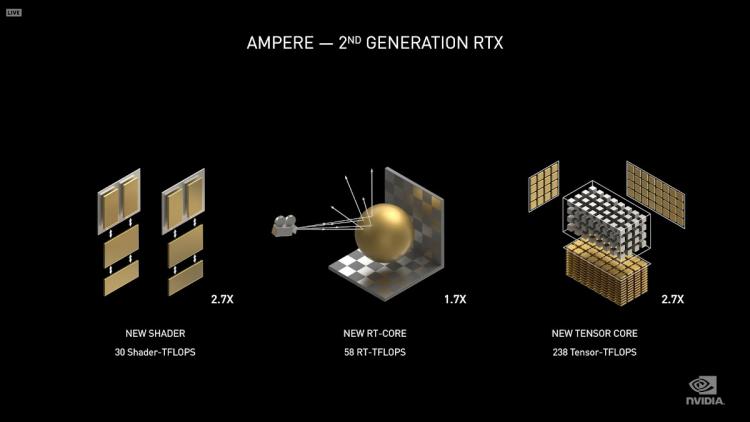 There are substantial revisions to the shaders, RT Cores (used primarily in ray tracing) and Tensor Cores (AI inferencing). The shader can now process double the number of instructions per clock and, with overall shader numbers also increased, NVIDIA are now claiming up to 2.7x shader performance for the RTX 3080 (30 TFLOPS) compared with RTX 2080 SUPER (11 TFLOPS). It's a similar story for ray tracing and tensor operations thanks to 2nd Generation RT and 3rd Generation Tensor Cores, and the card exhibits 1.7x and 2.7x improvements respectively relative to the one it replaces in NVIDIA's product stack.

The largest Ampere consumer GPUs now also support GDDR6x, a memory standard with double the throughput of GDDR6 but lower power consumption per bit. The memory operates at up to 19 Gbps and makes for astonishing memory bandwidth depending on the bus width of the GPU in question. This standard is a joint development between NVIDIA and Micron, long-standing partners in such technological advancements, and is currently being rolled out across enterprise class networking hardware.

RTX 30-series cards are the first from NVIDIA to support PCI-Express 4.0, the high-bandwidth I/O technology only available on AMD motherboard and CPU platforms at this time. One means of taking advantage of this additional bandwidth will be RTX IO, NVIDIA's implementation of the Microsoft DirectStorage standard that offloads game storage access from the CPU and system memory to allow it to be uncompressed and stored directly video memory.

The new generation of cards will also support HDMI 2.1, which incorporates standards for 8k60fps and 12k30fps broadcast down one cable, Dynamic HDR, and enhanced gaming modes including variable refresh rates and low latency modes. 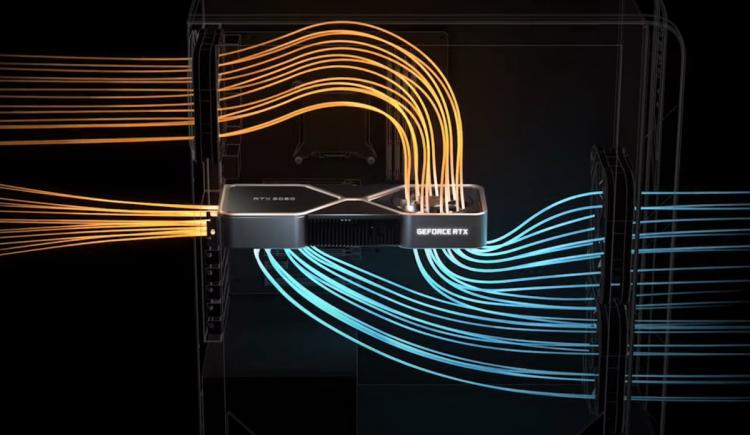 Consumer Ampere will debut on September 15th with the GeForce RTX 3080, NVIDIA's flagship for the series (but no their highest performing model). Averaged at 4K and across multiple titles, NVIDIA claim its performance is up to twice as fast as the RTX 2080, but most importantly will be released at the same price as its predecessor (starting from $699).

A little more than a week later NVIDIA will launch the GeForce RTX 3090. Paradoxically not a flagship, the RTX 3090 is a bigger, meaner Ampere design that effectively supersedes the 'Titan' prosumer model of the previous generation. Use of 19Gbps GDDR6X memory allows it to push a bandwidth of 940GB/s, an astonishing feat. It is however a huge beast, with a massive triple-slot 'flow-through' cooler. RTX 3090 will be on sale on September 24th, priced from $1499 and also sold as models from partners. 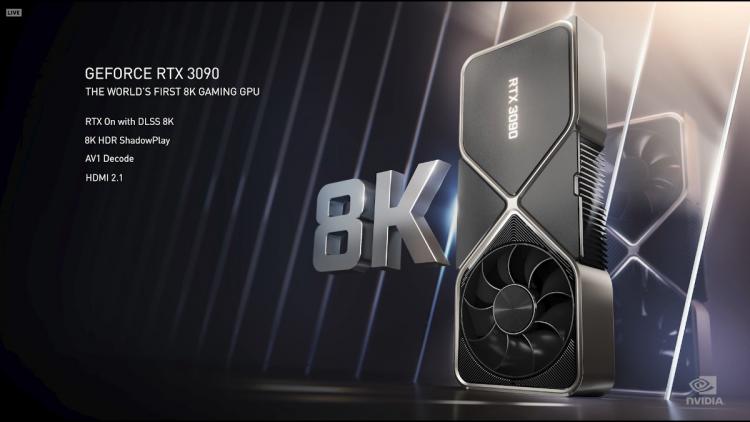 Finally, arriving in October will be the RTX 3070. A more svelte model than the RTX 3080. possibly based on a slimmer GA104 processor, it has 2/3rds the number of CUDA cores and only supports 8GB of GDDR6, but still boasts performance on par with the RTX 2080 Ti in ray traced RTX workloads. The cooler is a more traditional dual-fan design that's styled in a similar manner to the more high end reference designs. The most enticing aspect of the card, aside from its performance, is the ticket price of $499. At least, that's were it will start from.

All the RTX 30-series cards are powered by a single proprietary 12-pin power connector, rather than multiple 6/8-pin PCIe power connectors. An adapter is included in the box, and bear in mind that the cards have between 220W and 350W total graphics power (TGP), the latter of which is 100W more than the RTX 2080 Ti.

These are the cribbed specifications from NVIDIA. Notice those CUDA core counts, roughly double the leaks and over 10,000 on the RTX 3090; to put that into perspective, the RTX 2080 Ti had 4352 CUDA cores. Even though the number of transistors has increased to 28bn from 18bn, there's clearly more changes to the Shader Module on Ampere than previously reported. Hopefully all will be revealed by a subsequent architectural deep-dive prior to the series launch.

NVIDIA's GeForce RTX 30-series is going to hit the market like a thunderbolt in a couple of weeks, but only for those with pockets deep enough to shell out the $699 starting price (approx. £520, excluding V.A.T.). Without comprehensive performance comparisons at popular resolutions and in non-RTX enabled games, it will rely on the meagre current crop of RTX-On titles to justify its price. It may be what the RTX 20-series should have been, but there are still just too many question marks to justify it without some solid and reassuring answers. Maybe Cyberpunk 2077 alone is enough in your mind however. 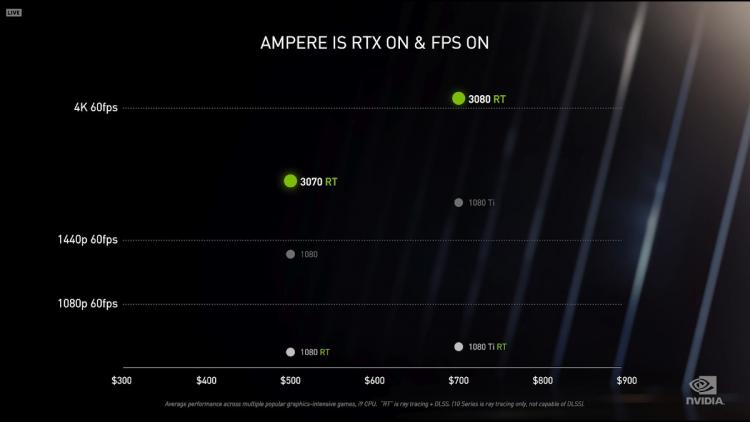 As for the gaming mainstream, NVIDIA had nothing to say at this time. The <$300 market may continued to be dominated by AMD's Navi and NVIDIA's 16-series Turing for the foreseeable future. An RTX 3060 was leaked at $399, but thus far hasn't been officially announced.

So if you're being exhorted to pre-order the new hardware, pause and take a breath. How's your current GPU handling today's titles? Does your monitor allow you to take advantage of the extra performance? Are there any RTX titles in play or on the near horizon that can justify the upgrade. And maybe wait on independent performance analysis before swallowing the official story whole.

More information on the GPU and its features are available here.